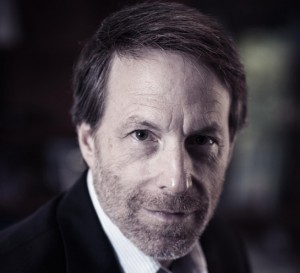 In commemoration of the recent 150th anniversary of the end of the Civil War, Jewish Action spoke with Benjamin Shapell, co-author of Lincoln and the Jews: A History and founder of the Shapell Manuscript Foundation, an independent educational organization whose collection includes original documents of world-renowned individuals, including American presidents and Mark Twain. Shapell, who is Orthodox, lives in Israel with his family.

Shapell’s original manuscripts, which were revealed to the public recently, tell of the little-known but significant relationship Abraham Lincoln had with American Jews. This special relationship is somewhat surprising since at the time, Jews comprised less than one-half of 1 percent of the American population.

Jewish Action: Why have you invested so much time, effort and money in collecting original letters and manuscripts related to Lincoln and the Jews? Why is this so important to you?

Benjamin Shapell: Many of these manuscripts have never been seen before by the public. Through the material in my collection and the scattered holdings on the subject in only a handful of public institutions, these manuscripts tell a new, remarkable and relevant story. The manuscripts reveal much about Lincoln’s development, his setbacks, his personal tragedies, his humor, his humility . . . . The list goes on. It was important to us that the letters be readable, that their color and imperfections come through the page. It gives the reader a sense of intimacy that is rare, particularly in our overwhelmingly digital age.

As I researched the materials that went into the book, I was consistently surprised to discover Lincoln-Jewish connections associated with important events in American history—Lincoln’s famous debates with Stephen A. Douglas in 1858, his presidential campaigns, significant military appointments, the creation of religious pluralism within the military chaplaincy, the Gettysburg Address, the New York City Draft Riots and the Emancipation Proclamation; there are even Jewish connections associated with John Wilkes Booth and perhaps even to Lincoln’s last thoughts, of his desire to visit Palestine with Mary [his wife].

There are other remarkable facts that characterize Lincoln’s legacy: When General Ulysses S. Grant was expelling the Jews from his vast military district, comprising all or part of four different states, Lincoln was freeing the blacks; as anti-Semitism was growing in the army, Lincoln was appointing a Jew. [Lincoln appointed an Orthodox Jew as assistant quartermaster with the rank of Captain in 1862.]

JA: How do you go about collecting material?

BS: I have been a careful collector. [He has been a collector for thirty-five years.] I never wanted to collect just any material. I narrowed it down to very specific themes. There are historical themes, and then more emotional—or perhaps philosophical—themes. The historical ones are clear: American presidents, Mark Twain, the Holy Land and Zionism. As themes go, what interests me most is the human aspect within those broader historical categories—moments of humility, candor, irony, strength in the midst of fear; the moments that tell a more honest, more intimate perspective on what we think of as human greatness.

JA: What are some of the highlights of your Lincoln collection? 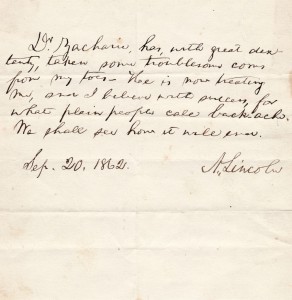 Lincoln’s testimonial for his Jewish chiropodist [podiatrist] and political confidant, Issachar Zacharie, endorsing his work with the military. Courtesy of the Shapell Manuscript Collection

JA: You have a copy of the Second Inaugural Address, a deeply religious document that almost reads like a sermon, rather than a speech. How did you acquire it? What can we learn from it?

BS: I believe you mean the quotation, in Lincoln’s hand, of the last portion of the Second Inaugural that begins “With malice toward none, with charity for all . . . . ” This was acquired at a public auction in New York over twenty years ago and teaches us an enormous amount. There is a concept conveyed in the speech that is relevant for our contemporary lives. Lincoln has given us something profound to help guide us in searching for answers to difficult questions during both our personal trials and tribulations, as well as those we experience as a people. In this address, Lincoln provides his personal conclusion—accepting that sometimes there are few, if any, answers to some of life’s more complicated questions. In Lincoln’s case, [he could have been referring to] the brutal reality of human cruelty in the Civil War, which resulted in the death of over 700,000 Americans and a nation torn apart. Yet, despite all of that, his humble acceptance of God’s hidden purposes was simply conveyed with a quote from an obscure half verse from Psalm 19, included in the Shabbat liturgy: “The judgments of the Lord are true and righteous altogether.”

5 1 vote
Article Rating
This article was featured in the Winter 2015 issue of Jewish Action.