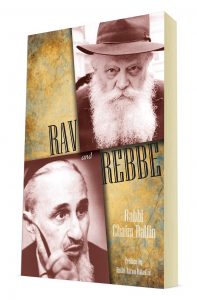 Rabbi Chaim Dalfin conducted extensive interviews to amass the network of facts and memories about two great Jewish leaders of the twentieth century, Rabbi Joseph B. Soloveitchik (“the Rav”) and Rabbi Menachem Schneerson (“the Rebbe”). As a result, this book is full of interesting information that will delight historical trivia buffs. For example, how did the two meet? Rabbi Dalfin (p. 200) quotes the story from Rabbi Julius Berman, the Rav’s lawyer and confidant.

When studying in university in Berlin, one day the Rav took a nap in his apartment. He awoke to see a young man standing over him. The Rav asked who he was and the Rebbe identified himself. How and why did he get into the apartment? The young man explained that he barely knew anyone in Berlin and recognized the Rav’s name, so he came to the apartment. He knocked; no one answered; he tried the door and it opened, so he entered.

This interesting but somewhat strange story is one of the many historical tidbits in this book. However, despite the many facts and anecdotes in the book, Rabbi Dalfin’s interpretations of the history are often so biased that he has effectively twisted those facts into a falsification of history.

The pivotal moment with which the book begins is the celebration of the Rebbe’s thirtieth anniversary in his position in 1980, which the Rav attended after being repeatedly asked by various followers of the Rebbe. By all accounts, the evening was magical and revealed true friendship between the two leaders. Rabbi Dalfin declares that “on that chilly Monday evening in 770, the last chapter was written on the 200 year old regrettable saga of divisiveness between the Chasidim and Misnagdim camps” (p. 4). Throughout this book, the author himself demonstrates that this thesis is exaggerated. First, the two had been friends while in university in Berlin, as described above. Additionally, the Rebbe’s father-in-law had reached out to the Rav in 1941 and had developed a supportive relationship. Perhaps most importantly, the Rav’s daughter had married the son of a Chassidic rebbe in 1954! Clearly, the Rav had warmed to Chassidim before 1980. Additionally, Rabbi Eliezer Menachem Shach led Mitnagdim in attacking Chassidim well past 1980, which continues today long after his passing, so the final chapter has not yet been written.

The book contains many outlandish statements implying that the Rav and his ancestors were secret Chabad followers. “One might even suggest that the Soloveitchiks understood that the Chabad Rebbes had been gifted [with] a ‘higher power’” (p. 30); “The Rav, a man of truth and Torah, seems to be arguing for the preeminence of a Lubavitcher yeshiva” (p. 50); “While the Rav followed the Misnagid approach to practical Halacha, he was still a strong believer in the deep philosophy of Chasidus” (p. 63). The Rav taught that “even if our logic at times dictates otherwise, when we hear the directive from a Tzaddik [namely, the Rebbe’s father-in-law]—we follow” (p. 227). This is all an exaggeration to the point of distortion, which occasionally Rabbi Dalfin admits: “I say ‘accept’ [Chabad] because as much as he may have respected Chabad, at the end of [the] day (as he himself said numerous times in public) he remained, ‘A Misnagid from the Misnagdic house of Volozhin” (p. 61).

The Rav had a deep bond of friendship with the Rebbe from their time together in Berlin and a respect of his leadership and accomplishments in America. The Rav also greatly appreciated the Tanya, the founding work of Chabad theology. But in reporting these undeniable facts, Rabbi Dalfin omits important context. The Rav had even deeper bonds of friendship with Rabbi Moshe Feinstein and Rabbi Shneur Kotler, among other Torah luminaries. The Rav appreciated even more the theological teachings of the Rambam and the Vilna Gaon. The Rav was not a closet Chabad follower but a man with broad intellectual interests and, like just about everybody, a nostalgia for his youth that created a bond with his impressive friend from those pre-War years.

In endnote 92, Rabbi Dalfin implies that Rabbi Berman was hesitant to provide an interview because he worried this would become a “propaganda tract for Chabad.” Rabbi Berman was right to be concerned. This flawed, inconsistent and, at times, strange book contains a great deal of interesting information that can serve as a second-hand historical witness only if read deeply critically. 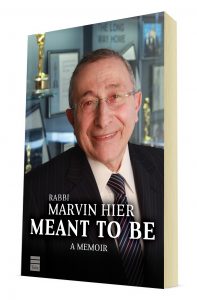 Donald Trump’s presidential inauguration included an invocation by an Orthodox rabbi for the first time in American history. Rabbi Marvin Hier, who has criticized Trump but respects the office of the president, enjoys access to world leaders and Hollywood stars and has won two Oscars for documentaries he has produced. Rabbi Hier did not set out for this high profile role. In his memoirs, he describes growing up in the Lower East Side, learning in the yeshivah of Rabbi Jacob Joseph, courting his wife while working as a busboy in the Catskills in upstate New York and stumbling into a job in the rabbinate. The first portion of this memoir describes a typical rabbinic success story. Bright and enthusiastic, Rabbi Hier energized his Vancouver synagogue with innovative programming, bringing song and high-profile scholars to his growing community.

In 1977, Rabbi Hier moved to Los Angeles to start a yeshivah for college-age students. Partnering with Yeshiva University in New York, this yeshivah opened as Yeshiva University Los Angeles, fondly known as YULA. A few years later it expanded with a high school and has since become an institution of American Orthodoxy. Rabbi Hier continued to serve as the school’s dean until 2005.

If that was all he had done, he would have enjoyed a remarkably successful career in the rabbinate. Leading a congregation, outreach, education, strengthening a community—these are what young rabbis dream of accomplishing. But these successes were only the beginning. He also opened a Holocaust remembrance and education center. He convinced two very different kinds of celebrities to join the effort—Simon Wiesenthal, the Nazi hunter, and Frank Sinatra, the entertainer. Wiesenthal gave the center purpose and direction while Sinatra helped raise money. The Simon Wiesenthal Center grew into an organization that fights for human rights and opposes anti-Semitism. It built the Museum of Tolerance, which opposes all prejudice and has a special area devoted to the Holocaust.

Meeting with foreign dignitaries, fighting against injustice and advocating for his people, Rabbi Hier has become a part of history. This book starts with a yeshivah-trained rabbi serving in a pulpit and building a yeshivah. Then it turns into a Who’s Who of celebrities, dignitaries and philanthropists, all told with the story-telling charm of a Lower East Side yeshivah bachur. 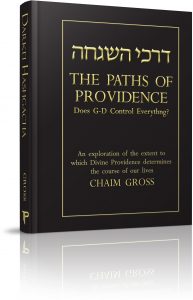 In a sweeping survey of Jewish thought over the centuries, Chaim Gross thoroughly explores the different views among the Medieval and modern thinkers about hashgachah peratit, individual providence. Despite all the many different opinions that he explains, Gross ably shows trends of thought.

Medieval thinkers generally see limits to individual providence. God allows for nature to take its course and intervenes under specific circumstances. God rewards observance of commandments and punishes sins. He directs species and nations. He closely guides the righteous. But individual, average people sometimes live under the laws of nature.

In the modern era, however, Jewish thinkers adopt a view of universal individual providence. God guides everything that happens in the world. Everything that happens to you, whether good or bad, is decreed by God. Chassidim and Mitnagdim, Ashkenazim and Sephardim, with few exceptions, adopt this belief. All this is fairly common knowledge in Jewish thought. Aside from his clear explanations and breadth of citation, Gross adds little new information up to this point; however, Gross’ contributions are two-fold.

Gross asks when and why the view of individual providence changed. He vividly demonstrates a dramatic shift in thought in the eighteenth century. The seventeenth century experienced a number of trends and events that led to an embrace of mysticism. The Arizal lived in the prior century and his kabbalistic teachings spread. The pogroms of 1648-1649 (Chmielniki Massacres/Tach Ve-Tat) spurred many to look for mystical explanations for their suffering. Spinoza’s heresy in the seventeenth century and its further growth in the Haskalah in the eighteenth century caused a mystical backlash against rationalism that pushed the expansive view of individual providence to the fore.

In effect, Gross argues, recent thinkers who have adopted complete individual providence have still greatly limited it. Their worldview moves closer to that of Medieval thinkers, despite protestations to the contrary.

Gross’ book engages the reader in deep discussion of Jewish thinkers throughout the ages. His encyclopedic treatment examines texts and concepts in an accessible way. Darkei Hashgachah surveys the post-Talmudic history of Jewish thought and raises new points that deserve consideration. We are supposed to see God in our lives, but how much? This book takes you through the different Jewish answers to that question across the centuries.

Rabbi Gil Student writes frequently on Jewish issues and runs Torahmusings.com. He is a member of the Jewish Action Editoral Board.