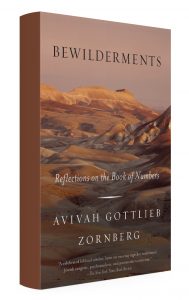 The first time I heard Dr. Avivah Gottlieb Zornberg teach, I was in the crowded living room of a garden apartment in Katamon, Jerusalem in 2002. A slightly older friend from my seminary in Jerusalem suggested I accompany her there. She told me to prepare to be enthralled. Still reveling in my newfound passion for Tanach, especially the meticulously text-based approach emanating from Herzog College of Yeshivat Har Etzion, I brought along my marked-up and highlighted Koren Tanach, excited to learn about new patterns and themes in the Joseph story. Instead, I heard about psychoanalysis, gaps, trauma; loose linguistic connections that included English, various Romance languages and Biblical Hebrew; and some discussion of the Czech novelist Milan Kundera, all buttressed by midrashim that bore only an associative relationship to the text as I understood it. In short, as a nineteen-year-old looking to unpack the peshuto shel mikra (the simple meaning of the Biblical text), I was confused.

Around ten years later, I found myself in the massive—and packed—sanctuary of Lincoln Square Synagogue in Manhattan ready to give Zornberg (or myself) another chance. This time I was surrounded by hundreds, rather than tens, of others, but the room was so quiet that you could hear a pin drop. The topic for the evening was “Let Me See That Good Land,” —Moses’ tragically thwarted attempt to enter the Land of Israel. Zornberg’s talk discussed, among many other things, the limits of language—particularly poignant when considering Moses’ speech impediment. She also discussed the Greek term eros, which Zornberg connects to the language of avar (cross-over), both of which play on the tension between the actual and the possible, and the known and the unknown. She reflected on the nature of Moses as Moshe Rabbeinu (Moses our teacher), whereby Moses translates his own uncertainty into an educational message that helps the people of Israel transcend their own limitations and usher in a new epoch of history. The talk was mesmerizing and beautiful, and I was struck by the sight of so many fellow American Jews gripped and enchanted by Zornberg’s weaving together of midrash and peshat, Kafka and Freud.

This talk about Moses forms the capstone of Zornberg’s newest book entitled Bewilderments, which ostensibly focuses on Sefer Bamidbar, the Book of Numbers, but in truth extends many of the other themes she has discussed in previous volumes, particularly her Exodus anthology, The Particulars of Rapture (New York, 2011). The title of Bewilderments stems from the technical translation of midbar as wilderness, rather than desert. For Zornberg, the midbar is not an empty and meaningless void, but rather a site where new discoveries are made and past traumas are worked through and processed. In this book, Zornberg is also particularly interested in the aspect of Sefer Bamidbar that relates to dibbur (speech), a fact which is emphasized in Chassidic and mystical sources. Here Zornberg truly shines as a literary scholar interested in reflecting on the nature of language itself, and a reader of Midrash. As she cites from Shemot Rabbah (2:14): “ein dibbur ela midbar—not ‘speech,’ rather ‘wilderness.’” Zornberg seeks to connect the negative murmurings of the Israelites in the wilderness, their complaints and their betrayals, with the ecstatic spiritual portrait of the Jewish people in the midbar painted by the Sefat Emet and others. For Zornberg, the time spent in the midbar is not merely a terrible waste, four decades spent waiting for most of the people to die, but also a place where language and communication come to the fore. This is the place where the prophet Hoshea imagines a renewed relationship between God and the Jewish people through language: “Therefore, I will seduce her, lead her through the wilderness (hamidbar) and speak (ve-dibbarti) to her heart” (Hoshea 2:16, Zornberg’s translation).

Beyond offering specific insights, Zornberg presents an expansive framework for reading Tanach that sets her apart from nearly every interpreter out there.

Beyond meditating upon language, Zornberg also notes the uniquely feminine qualities present in Sefer Bamidbar, which is bookended by the case of the Sotah in the beginning and the story of the daughters of Tzelofchad in the end. She cites the midrash quoted by Rashi that “the decrees against the Spies did not apply to women, because they loved the land.” And she discusses the fascinating language invoked by Moshe himself, wherein he asks God:

Why have You dealt ill with Your servant, and why have I not enjoyed Your favor, that You have laid the burden of this people upon me? Did I conceive this entire people, did I bear them, that You should say to me, “Carry them in your bosom as a wet nurse carries an infant,” to the land that You have promised on oath to their fathers? (Numbers 11:11-12, Zornberg translation).

Moses uses the metaphor of a nursing mother to explain his own troubled relationship with his people, and here Zornberg links the language of “omein”—a man who, inexplicably, nurses—with the word emunah (faith). Zornberg writes:

What begins in Moses’ metaphor, as in all powerful metaphors, is a process in which unconnected images—Moses and the pregnant mother, or Moses and his people—fail to quite connect with each other. An abyss yawns between words, between Moses and his people, between Moses and God. What makes that abyss palpable is the very force of Moses’ yearning. But a metaphor blossoms from this fissure. His language has never been so alive, as at this moment of complex love (p. 81).

For Zornberg, the failure of the nursing metaphor to be effective when a man is narrating represents the failure of the people of Israel’s emunah and faith more broadly. And at the same time, we are moved by Moses’ attempt to reach for the right words. The evocation of the nursing mother suggests a possibility of a more profound relationship that remains a goal toward which to strive, even if in the wilderness it remains out of reach. Zornberg also considers the importance of this nursing imagery in Moses’ early years, when his sister Miriam finds him an omenet (wet nurse). For Zornberg, locating the female strands within our tradition is not an excruciating task that necessarily raises the specter of feminist angst. It is, rather, as natural as mother’s milk, omnipresent in the rabbinic tradition and in the text of the Torah itself. She instinctively knows where to look for, and what sorts of questions to ask about, these strands.

Zornberg highlights the remarkable potential of Tanach to reflect upon, and in turn be illuminated by, many of the deepest questions and concerns raised in continental philosophy, postmodern criticism and the field of psychoanalysis.

In addition to its discussion of speech and nursing motherhood, Bewilderments explores a great deal more. The organization of the book is not a linear one—Zornberg herself describes the structure of the book as being “musical” in nature: “in which I repeatedly circle back to certain key passages, rereading them in the light of the immediate discussion. The biblical and midrashic words release spiraling meanings that gather with the movement of the narrative.” This is not a book for readers accustomed to tight sequential arguments, with questions that have definitive answers and conclusions that are rigorously proven. Like her volumes on Genesis and Exodus, it is packed with delightful and insightful sources, spanning the gamut from Midrash, Chassidut, psychoanalysis, literature and beyond. Not every one of Zornberg’s points speaks to me, as they inevitably won’t to every reader. Nevertheless, at least every few pages she raises an insight that renders the investment of working through this dense and rich book worthwhile.

The Korach chapter of Bewilderments was particularly filled with such moments. Korach and Moses, who Zornberg calls “the cousins,” each embody a particular relationship with speech. Korach’s confident and supremely rational assertions, alternating with deliberate silence, are contrasted with Moses’ difficult and continuously evolving relationship with speech, moving from someone who is aral sefatayim (has sealed lips), to the greatest rhetorician the Jewish people have ever known. The gaps and hesitancies that characterize Moshe’s speech in fact leave room for the Divine, in contrast with Korach, about whom Zornberg writes: “Rigid with selfhood, Korach has lost the sense of the gaps and edges of human experience; and with it the ability to be permeated by infinity. Like a stone, he sinks into silence.” And yet Zornberg is intrigued by the “sons of Korach” whom we hear sing in the Book of Psalms. Zornberg, with the help of the Midrash and Sefat Emet, suggests that the notion of song links the closed circle of Korach’s cold rationality with Moses’ open-ended prose. Even if Korach and his band are thrown into a pit, his children will eventually sing praise to the living God: “from the edge of the pit, living voices find their true desire. Somehow, from that liminal space, live children emerge, whose choirs fill the Temple with song.”

Beyond offering specific insights, Zornberg presents an expansive framework for reading Tanach that sets her apart from nearly every interpreter out there. Her books are a true illumination of the Talmudic maxim which describes the Torah: “Turn it and turn it for everything is in it” (Avot 5:22). Zornberg highlights the remarkable potential of Tanach to reflect upon, and in turn be illuminated by, many of the deepest questions and concerns raised in continental philosophy, postmodern criticism and the field of psychoanalysis.

In this regard, many of us owe a debt of gratitude to Zornberg and her mode of Torah study, which—as I realized in that packed evening in Lincoln Square Synagogue—continues to influence and inspire significant pockets of the Orthodox world. Without detracting from the scope of her accomplishments, if I could ask for one additional thing from her approach, it would be a reflection on what differentiates our Tanach from the expansive range of sources she invokes. When we read Zornberg, we are astounded by how seamlessly Lacan, Freud, George Eliot and T.S. Eliot can inform our study of Tanach. What I wish accompanied this dynamic is some equally broad-minded discussion of how our holy texts possess a transcendent quality that is not shared by the writings of the secular or non-Jewish thinkers. While this may not be precisely what Zornberg is trying to do in her books, to me it is an intuitive next step as we learn from, and hopefully build on, the gifts she has given us with her unique Bible commentaries.

Sarah Rindner teaches English literature at Lander College for Women in New York. Her writings on Jewish and literary topics have appeared in the Jewish Review of Books, Mosaic Magazine and other publications. She lives in Teaneck, New Jersey with her family.