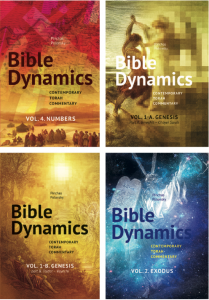 In 1986, I had the great privilege of traveling to the Soviet Union as a shaliach of the State of Israel to teach Torah to refuseniks, with an emphasis on training underground Torah teachers in Moscow, Leningrad and Riga. In Moscow I encountered several active groups of underground Torah study, with one of the most dynamic being the Religious Zionist group Machanaim, which was led by a young mathematician, Pinchas Polonsky. I had gone to the USSR prepared to teach shiurim in the area of taharat hamishpachah, which a prior shaliach had informed me was an area of ignorance in the fast-growing ba’al teshuvah community in Moscow. Upon meeting my first contact in the Machanaim group, I presented my “credentials” and announced my plans. He retorted, “Yes, that used to be an issue, but Pinchas Polonsky delved into it and has already written a handbook!”

Polonsky was born in Moscow in 1958, and as a teenager, he began to study Hebrew and Torah clandestinely, eventually deciding to make aliyah and becoming a refusenik. In 1979, he helped found Machanaim, becoming one of its main teachers and literary activists. He was finally able to make aliyah in 1987, and he continued the work of Machanaim with the subsequent large wave of immigrants from the former Soviet Union. Polonsky went on to several years of yeshivah study in Israel and earned a PhD in the sociology of religion from Bar-Ilan University, where he also taught; he taught at Ariel University as well. He resides in Beit El.

Polonsky’s literary output is substantial. At first writing in Russian and subsequently in Hebrew, he has seen the beginning of translations of some of his works into English in recent years, including works on the thought of Rabbi Avraham Yitzchak HaCohen Kook and Polonsky’s multi-volume Biblical commentary Bible Dynamics: Contemporary Torah Commentary, which is based upon the work of the French-Israeli philosopher Rabbi Yehuda Leon Ashkenazi (Manitou, 1922–1996) and his Jerusalem-based disciple Rabbi Oury Cherki.

Bible Dynamics is a compilation of Polonsky’s original, creative commentaries on the Torah. Genesis (two volumes), Exodus and Numbers have already been published (originally in Russian and translated into English), and others are in preparation. In the introduction to the first volume, Polonsky addresses the need for more contemporary Torah commentary. In his view, the establishment of the State of Israel and the return of a significant portion of world Jewry to the Land of Israel created a different mindset. No longer concerned primarily with self-preservation, the Jewish people can now turn outward to share its heritage with the rest of humanity. In a parallel development, there is now more openness in the world to the study of the ancient Jewish wisdom of the Bible. Jewish readers as well have changed. Polonsky writes:

Jewish psychological and cultural integration into the Western world has brought the secular Jewish reader and the non-Jewish reader closer together than ever before. . . . The traditional Jewish reader of the past was mainly interested in observing the commandments. . . . A contemporary student of the Torah . . . is . . . more interested in ideas that will promote his personal development.

While the above may seem to imply that Polonsky’s work is geared exclusively toward a non-observant or even non-Jewish readership, this is certainly not the case, which becomes clear as he defines his exegetical approach based upon the kabbalistic worldview of the above-mentioned Rabbi Ashkenazi and Rabbi Cherki. In doing so, the title Bible Dynamics becomes clear. “[It is] most relevant today to read the Torah as an engaging narrative of uniquely human characters and personalities . . . [that] include[s] the dynamics of development—the evolution of people, ideas and concepts.”

While perhaps challenging some traditional understandings of the personalities in the Torah, this approach is nonetheless rooted in a close textual reading, as well as in traditional and kabbalistic interpretations, and is thus of great significance to the open- minded traditional reader as well. Polonsky’s strong Religious Zionist perspective is also evident in his Biblical interpretation.

No longer concerned primarily with self-preservation, the Jewish people can now turn outward to share its heritage with the rest of humanity.

Polonsky’s approach differs from that of other modern Biblical commentators. Nehama Leibowitz, for example, concentrates on specific sugyot in the parashah, shepherding the reader through a variety of midrashim, as well as through medieval and modern commentators. By comparing and contrasting these commentators, she was able not only to achieve a close explication of their parshanut (methodologies) but to come to some conclusions regarding the meaning of the Biblical text as well. She read peshat through the prism of earlier commentary. In contrast, Polonsky utilizes midrash and commentaries less frequently, primarily addressing the text itself.

More similar in his approach to Rav Samson Raphael Hirsch or the Netziv, Polonsky exhibits a philosophical bent, and, while indebted to earlier commentary, he shows much creativity in new readings. Like these predecessors, he is deeply invested in a psychological portrayal of Biblical heroes, especially as their characters develop with the progression of the Biblical narrative. All three of these commentators clearly view the Biblical narrative as sacred history that comes to inform us of G-d’s will in the unfolding of human history. Additionally, they all desire to present Biblical commentary in a manner that will be receptive to the contemporary reader. Polonsky, who wrote in Russian, is close to Rav Hirsch, who wrote in German, as both initially sought to reach out to an audience less comfortable in Hebrew. While Polonsky is more overtly kabbalistic than his predecessors, the biggest differences seem to be a function of time and place, as Polonsky writes for a post-Holocaust, State of Israel audience in which the secularism and Reform Judaism of nineteenth-century modernism have been augmented by New Age, postmodernism and post-Zionism.

Let us look at two brief examples. Bereishit chapter 34 deals with the strange story of Yaakov, Lavan and the sheep, which precedes Yaakov’s return to the Land of Israel. Polonsky here skirts the scientific issues of animal husbandry and deals with the story on two levels, the simple meaning and the kabbalistic. For our purposes, it will be sufficient to share some of the insights from the simple interpretation (which includes some kabbalistic insights as well).

The decision to return to the Land begins when Rachel finally gives birth to Yosef. Yaakov had fled to Lavan to build a family, and he chose Rachel as his primary wife. Therefore, Rachel must give birth in order for this aspect of Yaakov’s mission to be complete. Furthermore, Yosef, like Esav, “rules over the material world,” and he can serve as Yaakov’s antithesis; Yosef’s birth enables Yaakov to return to the material life in the Land after the spiritual sojourn in exile. Thus, “Yosef ” and “Zion” share the same numerical equivalent (156), and Yosef, also as the future Mashiach ben Yosef, represents the first material stage of the redemption, which will later be completed by the more spiritual Mashiach ben David.

Regarding the sheep trading itself, Lavan (whose name means “white”) receives the white sheep. This symbolizes his “Aramean universality,” which seeks to swallow up all other cultures. Yaakov, on the other hand, opts for spotted sheep since his mission is to carve out an Israelite particularism, a unique culture based upon the values of the Torah and independent of worldly influences when these contradict the Torah.

Other messages that Polonsky finds in the story of Yaakov and Lavan include the importance for Jews, especially when living among the nations, to avoid childish naiveté, and the need to realize when it is time to cut one’s losses and get out before the danger becomes too great.

Jumping ahead to Shemot, Polonsky examines Moshe’s early years through the perspective of peshat and a bit of midrash, but without a kabbalistic perspective. Moshe is born at a time when Pharaoh has decreed the killing of the male line of the Jews, of the zachar, entrusted with the preservation of zachor, collective memory. Amram, deciding that without consciousness of the past there is no future for the Jewish people, decides to separate from his wife. Only when confronted by his daughter Miriam, who represents the future, does he realize that the force that strives for future life cannot be relegated to the past. He then remarries Yocheved, giving birth to Moshe. In this context, Polonsky duly notes the importance of female activism, as opposed to male passivity, in the unfolding of the story of redemption. Similarly, he contrasts Moshe’s ark—made by a woman and lined with tar and clay—with that of Noach—made by a man and lined only with tar; in Polonsky’s reading, tar represents passivity, whereas clay, a major creative material, represents activity.

Moshe’s development and education in the Egyptian court, as opposed to among the Jewish slaves, is a crucial aspect of his development as a leader of the Jewish people. Here,
in addition to developing a regal bearing, he is trained in statesmanship and diplomacy. For Polonsky, even the name Moshe, or Moses, represents a dual identity that is crucial for Moshe’s development and future role. Upon witnessing the oppression of the Jews and instinctively siding with them, Moshe makes a strategic decision that his Jewish identity is in fact his primary one. Seeing that there is no “ish” (man), he also recognizes that the entire Egyptian government and judicial system are hopelessly corrupt and decides to act on his own. However, a new identity crisis awaits him almost immediately as he comes to the awareness that the Jews, instead of supporting him, would rather engage in both brawling and informing on him to the authorities.

At this point, Moshe is completely disillusioned by both the Egyptians and the Jews, and he now faces a Pharaoh who is aware that Moshe has no support whatsoever. Moshe decides to flee to Midian, where he hopes that the Midianites, descendants of Avraham through Keturah,
will be more receptive to his spiritual and social vision. Moshe saves Yitro’s daughters from the other shepherds, demonstrating that his commitment to social justice is not limited to gentile oppression of Jews or intra-Jewish battles. With this, he begins the next stage in his preparation as the future leader of the Jewish people.

In summation, Polonsky’s books represent a refreshingly new and unique voice in English-language Torah scholarship. His books both enlighten and challenge us to rethink the way we look at the Torah and the world.

Rabbi Dr. Zvi Leshem directs the Gershom Scholem Collection for Kabbalah and Hasidism at the National Library of Israel in Jerusalem. He is the author of Redemptions: Contemporary Chassidic Essays on the Parsha and the Festivals. Dr. Leshem is also a contributor to the Encyclopedia Hebraica, second edition.