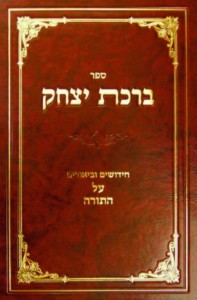 Reviewed by B. David Schreiber

Rabbi Menachem Genack’s newest work, Birkas Yitzchak: Chidushim U-ve’urim al HaTorah, reflects the sweeping range of multi-disciplinary scholarship of its renowned and prolific author. Rabbi Genack, CEO of OU Kosher, already highly acclaimed for his five works on the Talmud, applies his mastery of Talmudic analysis, complemented with his keen sense of homiletics and sensitivity to the human condition, to deduce numerous resonating moral lessons, insights and missives from otherwise overlooked pesukim in the Torah.

Throughout the sefer, Rabbi Genack culls insights not only from his revered rebbe, Rabbi Yosef Dov Soloveitchik, zt”l, but from his own extensive circle of accomplished personalities, such as Senator Joseph Lieberman and businessmen and Torah scholars David Lichtenstein and Tzvi Riesman, as well as many others. The result is a sefer with a very contemporary feel, whose messages and lessons appeal to a wide range of audiences.

I will present a sampling of some of the diverse topics discussed in the sefer, both to reflect the breadth of subject matters covered in this work and to whet the reader’s appetite to further plunge its depths.

In Parashat Chaya Sara (p. 26), Rabbi Genack introduces a recurring theme of this sefer, namely, that of hashra’at haShechinah, and the requirement that Jews inculcate their homes and lives with the awareness of the Divine presence. Rabbi Genack equates the three hallmarks of Sarah’s household—a continuously burning flame, a special endowment in her food and the ever-present Divine-like cloud—with the three miracles that prevailed in the Beit Hamikdash: the ner hama’aravi, which remained lit throughout the week; the lechem hapanim, which retained its freshness for an entire week and the perpetual Divine-like cloud. Our contemporary homes are likewise marked with the triad of the three mitzvot closely identified with women: lighting candles on Shabbat, setting aside the tithes of challah and observing family purity (see Shabbat 32a). Rabbi Genack goes on to suggest that the message of Chanukah, and its requirement that each Jewish home be adorned with a ner Chanukah, further reflects that theme. Not only was the hashra’at haShechinah dominant in the quasi Beit Hamikdash first inaugurated by our mother Sarah, but that paradigm of Divine presence should be perpetuated daily in our own homes. God’s spirit takes residence in every Jewish home that perpetuates the model originated by Sarah.

An important halachic discussion cited in the sefer centers on the halachic status of Eisav. Is Eisav treated as a Jewish apostate, or is he classified as a non-Jew? In Parashat Toldot (p. 34), Rabbi Genack writes that, although Eisav himself is treated as a Jewish apostate, his children are not classified as Jews. Rabbi Genack explains this phenomenon based upon an innovative insight that he heard from the Rav, in the name of Rav Chaim, regarding the Ten Lost Tribes. The gemara (Yevamot 17a) notes that the Ten Lost Tribes were not only physically lost, but they also forfeited their identity as Jews. They were declassified and reconstituted by Chazal as non-Jews. Rav Chaim theorized that children of apostates are likewise regarded as non-Jews. One of the many halachic consequences of this ruling is that the marriage between the son of an apostate and a Jewish girl has no halachic significance. The wife would not require a “get” to terminate the marriage.

Rabbi Genack adds that the berachah imparted by Yitzchak to Yaakov (28:4)—“Veyiten lecha et Birkat Avraham”—established and confirmed Yaakov and his lineage as the exclusive successors of Yitzchak, thereby investing them with kedushat Yisrael. Yaakov and his children thus formed the nucleus of Knesset Yisrael. While Eisav had the option of being included as an ancillary member of Knesset Yisrael, he rejected that path and instead chose an idolatrous lifestyle. Thus, Eisav is considered a Jewish apostate; however, his progeny are not endowed with kedushat Yisrael and are forever excluded from Birkat Avraham. In contrast, Yishmael was never presented with the similar opportunity of joining Knesset Yisrael, and as a result, Yishmael himself is regarded as a non-Jew.

In Parashat Vayeitzei (p. 35), the Torah tells us of the encounter between the angels who accompanied Yaakov during his sojourn outside of Eretz Yisrael and the angels who were to accompany Yaakov as he entered Eretz Yisrael. Likewise, Jews are accompanied by one set of angels during the week and a different set of angels on Shabbat. This changing of the guards is reflected in the piyyut of “Shalom Aleichem” recited on Friday night. This piyyut is seemingly problematic. Why does it conclude with the verse “tzeitchem leshalom”? Why do we ask the angels to depart as soon as they have arrived? Rabbi Genack, quoting Rabbi Eliyahu Henkin, zt”l, notes that the first verse of “Shalom Aleichem” relates to the special angels of Shabbat who accompany the Jew as Shabbat arrives. We therefore greet them first. On the other hand, the verse “tzeitchem leshalom” does not refer to these Shabbat angels. Rather, it refers to the angels of the weekday, who depart from the Jewish home at the conclusion of the week, as soon as the Shabbat angels arrive.

God’s spirit takes residence in every Jewish home that perpetuates the model originated by Sarah.

In Parashat Toldot (p. 34), Rabbi Genack reflects upon the moral character of Eisav and compares Eisav’s conduct with that of Yosef’s brothers. Although Eisav plotted to kill Yaakov, Eisav refused to implement his plot until after his father Yitzchak passed away. In marked contrast, Yosef’s brothers had no moral compunctions about executing their brother despite the extensive grief that their father Yaakov would inevitably suffer. Rabbi Genack suggests that this contrast is implicit in the piyyut of “Eileh Ezkerah” recited on Yom Kippur. The Roman viceroy (a scion of Eisav) castigates the Ten Martyrs (scions of Yosef’s brothers). The Roman emphasizes his progenitor Eisav’s sensitivity to his father Yitzchak, and contrasts it with the callousness that the ten brothers of Yosef exhibited toward their father Yaakov.

Rabbi Genack further develops this thought in Parashat Vayigash (p. 65) by analyzing the exchange between Yosef and his brothers after he reveals his true identity to them. Yosef cautions his brothers, “Al tei’atzvu ve’al yichar bieineichem, Do not be aggravated nor angry [that you have sold me down to Mitzrayim]” (45:5). Yosef’s selection of the words “al tei’atzvu, do not be aggravated” and the phrase “ve’al yichar bieineichem, do not be angry,” is puzzling. Anger and aggravation are not the responses of one who has a guilty conscience. Why didn’t Yosef simply tell his brothers not to feel guilty about the horrible crime of selling him into slavery? Moreover, during their initial encounter with Yosef, the brothers used the words “aval asheimim anachnu” (42:21) to express their remorse on having sold Yosef into slavery. Why then didn’t Yosef use the same word asheim? Why didn’t he seek to assuage their guilty conscience rather than caution them to temper their anger? Rabbi Genack notes that the phrase “al tei’atzvu ve’al yichar bieineichem” are the same words that the Torah uses to describe the reaction of the sons of Yaakov when they heard of Dina’s abduction. The Torah writes “vayitatzvu ha’anashim vayichar lahem, they became aggravated and angry” (34:7). Yosef was subtly chastising his brothers. His brothers were willing to wage a near-suicidal battle to rescue their sister. They exhibited such anger and vengeance when their sister was kidnapped. Yet these same brothers were unable to muster any similar sentiment of anger and vengeance when Yosef was sold into slavery. Implicit in Yosef’s choice of words are the questions, “Why did you not care? Why did you discriminate against me? Why did you not undertake my defense with the same alacrity and fortitude you displayed on behalf of your sister?”

In Parashat Beha’alotcha (p. 212), Rabbi Genack cites the Rav who notes that the pesukim “vayihi binsoa ha’aron” and the next pasuk “uvnuchoh yomar shuvah Hashem rivevot alfei Yisrael” (10: 35-36) are bracketed by two upside-down nuns. The gemara (Shabbat 116a) states that they constitute a sefer bifnei atzmo, a self-contained book. Rabbi Genack quotes the Rav who explains that this connotes what is reflected in the gemara (Nedarim 22a) that had the Jews not sinned at the episode of the meraglim, the entire Tanach would have consisted solely of the five books of the Chumash plus a sixth book, which would have contained a chronological account of the capture and distribution of the Land of Eretz Yisrael. The Rav theorized that the sixth book would have discussed the mechanism by which the land was invested with kedushah and would have detailed how the land was distributed among all of Knesset Yisrael. This sixth book would have commenced with the pasuk “vayihi binsoa ha’aron,” to depict that their entry into Israel would have been preceded by the aron, whose mere presence would have scattered all of the Canaanites. The book would have gone on to describe the allocation of the land. It would have detailed the construction of a beautiful Beit Hamikdash and the installation of the aron in the Holy of Holies. That book would have concluded with the pasuk “uvnuchoh yomar shuvah Hashem rivevot alfei Yisrael.” Once the aron would have been installed, the Divine presence would immediately have enveloped the Beit Hamikdash and would have thus endowed it with an eternal kedushah. The entire Knesset Yisrael would have resided in proximity to the aron and would have experienced an eternal communion with God. The Torah tells the people that this is what you lost because of your sin of the meraglim. You lost the sixth sefer that would have been. You lost the opportunity to be installed in an eternal land. You forfeited the opportunity of having hashra’at haShechinah on a daily basis.

It is these and similar themes, parallels and insights that weave themselves intricately and eloquently throughout this work. They not only provide new understandings of the written word, but, in so doing, advance very clear and important messages that relate to our everyday existence. Despite a wide range of disparate elements and varied sources, the work is remarkably tight and unified by consistent and recurring motifs and refrains. The reader will be well rewarded by gleaning from the efforts, erudition and insights of Rabbi Genack as reflected in this sefer. My humble berachah to him is that he continue to shower us with his depth, range of knowledge and inspiring messages. We are all richer for his efforts on our behalf.

David Schreiber is the author of the sixteen-volume Noraos Harav series, a transcription of shiurim of Rav Yosef Dov Soloveitchik, zt”l. He is a musmach of Yeshiva Torah Vodaath and Beth Medrash Govoha. He received his JD degree from Columbia University School of Law and practices real estate law.