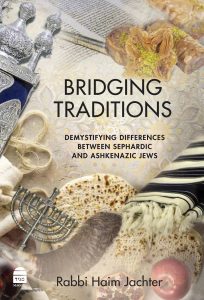 Bridging Traditions: Demystifying Differences Between Sephardic and Ashkenazic Jews brings together Rabbi Haim Jachter’s unique background, experience and erudition to create a masterful volume and invaluable book for Jews of all backgrounds. Despite the modest title, Rabbi Jachter guides the reader through the entire halachic process and evolution, pointing out where and why the various traditions emerged. While the focus is on the differences between Sephardic and Ashkenazic practice, the reader emerges with an understanding of the many different traditions even within the Ashkenazic and Sephardic worlds, as well as a proper understanding of the role of minhag and when local custom overrides one’s personal traditions.

The last century has seen the Jewish people make major geographic shifts in its population. While for many centuries Jewish families lived in the same region generation after generation, the world wars, the founding of the State of Israel and the exile of Jews from Arab lands led Jews from a wide variety of backgrounds to live near each other and encounter other communities’ traditions and customs. The result was often a homogenized new tradition that led to the lapse of many communities’ unique identities and minhagim.

With his Ashkenazic background, coupled with his experience in leading the Sephardic Congregation of Teaneck, New Jersey (itself a melting pot of various Sephardic traditions) for many years, Rabbi Jachter developed a keen eye for noticing even minute differences, which he describes and analyzes in the book. His many years in the rabbinate have also yielded a wealth of anecdotes, including personal conversations with contemporary posekim, that are interwoven within the book, making it an enjoyable read.

As a Sephardic Jew who learned in Sephardic and Ashkenazic yeshivot and often joins prayers in synagogues with different traditions, I found this book particularly useful, as the author gives pointed suggestions on how to deal with situations such as roommates with different customs or visiting a synagogue with different customs. Aside from differences you will find within the shul experience itself, Rabbi Jachter also covers other aspects of halachah, such as the use of an eruv, warming up food on Shabbat, the various Pesach traditions, the permissibility of gambling, and times for Birkat Halevanah. Each chapter begins with an overview of the subject, followed by the various rabbinical approaches and concluding with practical implications.

One interesting characteristic of this book is the occasional attempt of the author to theorize why different communities gravitated toward certain customs and how social inferences may have had an influence. For example, in the chapter titled “Hashem Imachem,” on the Sephardic custom to declare “Hashem imachem” upon receiving an aliyah to the Torah, Rabbi Jachter writes: “It is important to convey this lesson specifically during Keriat HaTorah. Unfortunately, some people view the Torah aliyot as an opportunity for social climbing, considering who receives the most and least prestigious aliyah, etc. Perhaps the exchange of Boaz and his workers is recalled at this time to remind us to zealously avoid such destructive behavior, especially in connection with Keriat HaTorah.”

Rabbi Jachter shows not only the difference between Ashkenazic and Sephardic practice but also the diversity within the Sephardic world.

Several chapters are devoted to general halachic concepts that manifest themselves in various scenarios. Rabbi Jachter succinctly details the various opinions and implications. One such chapter is titled “Women Reciting a Beracha on Mitzvot Aseh Shehazeman Gerama (positive time-bound mitzvot).” While all Rishonim agree that women are exempt from
such mitzvot (such as sefirat haOmer and lulav), the dispute concerns whether a woman may recite a berachah if she voluntarily performs such a mitzvah. After citing the sources of the original dispute between the Rambam and Rabbeinu Tam, Rabbi Jachter quotes the ruling of Rabbi Yosef Karo in the Shulchan Aruch concurring with the Rambam that it is forbidden. The Chida in the eighteenth century noted that some Sephardic women had begun to recite such a berachah, despite the objections of his teacher, Rabbi Yosef Navon.

In a surprising move, the Chida himself approved of this practice, based on the large number of Rishonim that allowed it. Rav Ovadia Yosef, though, was adamant in upholding the position of the Shulchan Aruch forbidding the practice. Rabbi Jachter follows with a list of wide-ranging authorities that did approve of the practice, including the Ben Ish Chai, the Kaf HaChayim and Rabbi Shemtob Gaguine in his Keter Shem Tov, who notes that in the mid-twentieth century, this was the custom of the Jews in Eretz Yisrael, Syria, Egypt and Turkey. The chapter concludes with references to Rabbi Shalom Messas, Rabbi Ben Tzion Abba Shaul and Rabbi Mordechai Lebhar permitting the practice in certain instances. In this case, Rabbi Jachter shows not only the difference between Ashkenazic and Sephardic practice but also the diversity within the Sephardic world.

The author does an excellent job in explaining the origins of diverging opinions and the unique styles and influences of the different posekim. The structure of the Shulchan Aruch and its spread throughout the world, the influence of the Arizal and kabbalah, the Ben Ish Chai’s unification of kabbalah and halachah, and Rav Ovadia’s efforts to scale back the kabbalistic influence and unify Sephardic customs are all discussed at length. The additional chapters on Moroccan and Yemenite Jews detail how their unique traditions developed.

I highly recommend this volume. It will leave the reader with a new perspective on Jewish customs and halachah and a better understanding of one’s own minhagim.

Israel Mizrahi is the owner of Mizrahi Bookstore in Brooklyn, New York, home to over 200,000 secondhand and antiquarian books of Jewish interest.