2016 was a milestone year for Kalman and Malki Samuels. That year marked the inauguration of a dream years in the making—the opening of the Shalva National Center, one of the largest centers of disability care and inclusion in the world. Built not far from the entrance to Jerusalem, the twelve-story world-class complex features an auditorium; a gymnasium; hydrotherapy and semi-Olympic pools; a virtual reality therapy suite; a research and study institute; a café, some of whose workers have developmental disabilities; and accommodations for 100 respite sleepovers per night. 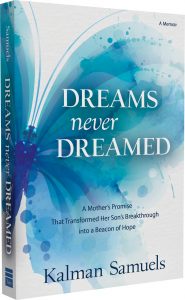 How was it that Kalman and Malki Samuels came to create this extraordinary organization that promotes social inclusion, empowers families and assists 2,000 children with disabilities each week? The answer lies in the subtitle of Samuels’ recently published memoir Dreams Never Dreamed: A Mother’s Promise That Transformed Her Son’s Breakthrough into a Beacon of Hope; it was a mother’s promise.

In 1977, the couple’s healthy, lively baby boy, Yossi, two weeks short of his first birthday, was examined by a doctor at a Jerusalem clinic before receiving his second DTP inoculation. All his developmental milestones were fine, so the nurse gave him the shot.

But Malki knew the same day that something was wrong. “I took Yossi home and followed the instructions they’d given me at the clinic . . . I bathed him, gave him baby paracetamol, and let him sleep. The moment he woke, I knew my baby was gone. He looked up at me with shiny eyes as if to say: ‘What have you done to me?’”

Only later did the couple discover that “Israel’s health authorities had already known for almost five months that the vaccine batch they were using . . . was dangerously flawed.” The defective pertussis (whooping cough) component was from the Connaught Laboratories of Canada. The diphtheria and tetanus components were from the Israeli Rafah company, which had combined the three.

Thus began a saga of almost forty years of anguish, faith, research, perseverance, legal battles and, ultimately, the realization of dreams, not only for the injured Yossi, but for thousands of other disabled children.

Yossi was declared legally blind—though he loves to wear glasses because it helps him feel more competent—and legally deaf. He was also severely hyperactive.

The couple left their home in Israel for New York, following every medical lead in search of help for their son. While Yossi was attending The Lighthouse—the famous specialized school for the visually impaired—Malki made a pact with God. “I promise You this. If You ever decide to help my Yossi, I will dedicate my life to helping so many other mothers of children with disabilities that I know are crying with me for their children.”

Some challenges were especially painful, like when children teased Yossi, or when a prestigious Jerusalem rebbetzin, visiting New York, said to Malki, “It’s not fair to yourselves or your healthy children . . . You should consider moving this child out of the house so you can get on with your lives.” Malki answered: “You have no faith in God.” She invited the rebbetzin to wait twenty minutes, until Yossi came home from school. She saw a nicely dressed child, wearing glasses and hearing aids, carefully navigating the steps and hugging and kissing his mother. Upon seeing this, the rebbetzin cried and asked for forgiveness for her insensitive remarks.

A few years later, the couple learned that a lawsuit could only be filed in Israel, since that was where the vaccination had been administered. They found an excellent Israeli lawyer and doctors who were willing to testify, and the family returned home. Samuels describes the legal battles in excruciating detail. In October 1983, five years after the vaccination and after exhaustive paperwork and research, the couple filed suit against the Canadian Connaught Laboratories, the Israeli Rafa pharmaceutical company, the city of Jerusalem, and the State of Israel. (The lawsuit ended in a settlement that even according to the judge was less than they deserved, but would save them more years of expensive and aggravating legal action.)

At the age of eight, Yossi experienced a “Helen Keller” moment, when Shoshana Weinstock, a warm and loving teacher who was deaf herself, taught him his first word—shulchan (table)—using finger spelling. “All of a sudden, he lit up and he got it,” Samuels is quoted as telling the Jerusalem Post. “She taught him the twenty-two letters of the Hebrew alphabet. Another speech therapist taught him how to speak Hebrew, and slowly he began to talk.” After that, Yossi was unstoppable. He learned to type on a Braille typewriter, to pray and to speak to those who were able to understand him.

In 1988, spurred on by their son’s breakthrough, the couple wrote their first proposal for an outreach program that would help other families with disabled children. In 1990 that proposal became Shalva, the Israel Association for the Care and Inclusion of Persons with Disabilities, which began as an after-school program for six children in the Samuels’ Har Nof apartment. The name “Shalva” is derived from Psalm 127 and means “serenity,” but like any new enterprise, the road to success was challenging. The book is filled with anecdotes of chance meetings on airplanes and conversations with friends and neighbors that enabled Samuels to reach donors who kept Shalva going and led to its development and expansion.

In addition to devoting her life and using her creativity to ensure the professional programs would be the best they could be, Malki, the engine behind Shalva, was involved in every aspect of the design and construction of the Shalva National Center, right down to the tiles. She was determined to make it feel like a home, not an institution. The renowned Israeli artist David Gerstein, deeply moved by the Shalva story, appreciated Malki’s vision and created a magnificent twenty-foot-high mobile of metallic butterflies that hangs in the Shalva atrium.

At the age of eight, Yossi experienced a ‘Helen Keller’ moment, when a warm and loving teacher who was deaf herself taught him his first word—shulchan— using finger spelling.

Around 2005, a gifted young musician, Shai Ben-Shushan, offered his services to Shalva. He had been a member of the Duvdevan special forces unit in the IDF and suffered severe injuries from a grenade attack while pursuing terrorists. He told Samuels, “Like a baby, I had to learn again to eat and to talk. My life was destroyed . . . I learned what it was like to be helpless and dependent on others . . . and I began to think about going back to music and sharing it with others who have similar challenges.” By the end of a year, Shai had created the now world-renowned Shalva Band, signaling to all that being disabled does not mean one cannot reach for the stars and make dreams come true.

In 2020, Shalva graduated its first program of young men who entered the IDF as soldiers in the Home Front Command unit. Israel’s Ministry of Foreign Affairs brings heads of state and diplomats to Shalva, just as they take them to Yad Vashem: The World Holocaust Remembrance Center and to Mount Herzl.

Dreams Never Dreamed is written chronologically, beginning with Samuels’ personal story of visiting Israel as a college student of the ‘60s, eventually becoming Orthodox, making aliyah and marrying his life partner. Samuels writes his family’s spell-binding story with an honesty and openness that pierces and opens our hearts as well. It is alternately inspiriting, infuriating, funny and enlightening. But for me, Malki’s voice and her photograph are missing. (If you want to “meet” her, you can watch a mesmerizing Shalva-produced film on YouTube entitled “About Yossi—A Film About Yossi Samuels.”)

The Yossi of today is smart, learned, eloquent and brave, with a sharp sense of humor. He can type, read, and daven in Braille; he particularly enjoys high-level Torah literature and magazines. He has traveled the world, met with celebrities and presidents (in Israel and America) and is a horseback rider and certified wine connoisseur. Samuels writes, “[Yossi’s] close friends number in the hundreds and acquaintances in the thousands.”

As his walking ability and balance worsened, Yossi was eventually confined to a wheelchair. “Our blind and deaf son said, ‘For the first time in my life, I feel handicapped,” writes Samuels. “Yossi had never referred to himself as blind or deaf, but rather as ‘low vision’ and ‘hard of hearing.’”

Samuels recalls in the book how his daughter Nechama told him that he was like Forrest Gump: “Mommy had her dream and told you, ‘Run, Kalman, run!’ You’ve never stopped; it has colored your life and all of ours.”

And the lives of thousands more.

Toby Klein Greenwald, a regular contributor to Jewish Action, is a journalist, playwright, poet, teacher and the artistic director of a number of theater companies. She is the recipient of the Lifetime Achievement Award from Atara-The Association for Torah and the Arts, which is a member of the OU Impact Accelerator’s third cohort, for her “dedication and contributions in creative education, journalism, theatre and the performing arts worldwide.”

4.3 4 votes
Article Rating
This article was featured in the Fall 2021 issue of Jewish Action.