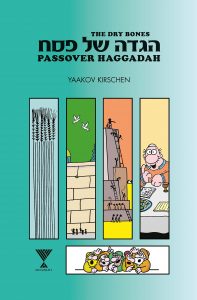 Some people accumulate haggadot the way that others accumulate social media “likes.” Every year brings a new stack of haggadot, replete with profound new insights to recite at the Seder. This is not one of those haggadot. The Dry Bones Passover Haggadah has nary a footnote or commentary to be found. At least not in the traditional sense.

Yaakov Kirschen may not be a household name but I’d bet that virtually every reader of Jewish Action is familiar with his comic strip, Dry Bones. Through his strip, named for the valley of dry bones that were subsequently revived in Ezekiel chapter 37, Kirschen has been offering chuckle-inducing commentary on Israeli politics for four and a half decades. Here, he brings his trademark wit and insight to the Passover haggadah. Instead of commentary from a new crop of Torah scholars, The Dry Bones Passover Haggadah features colorful and engaging cartoon illustrations and a variety of haggadah-themed comic strips.

The layout of the text is free-flowing and easy on the eyes, with matching Hebrew and English phrases juxtaposed for easy cross-reference. The English translation is engaging and reader-friendly; it also reflects modern sensibilities. For example, the “four sons” are “four children” – an increasingly-popular translation that is equally supported by the original Hebrew text. The “rasha” (“evil” child), however, is rendered as “contrary,” a translation that is, shall we say, generous to rasha’im. This generosity is not glossed over; the change in sensibilities is acknowledged by an accompanying comic strip. A little boy tells a little girl that “Grandpa says that back in ‘his day’ it wasn’t the four ‘children,’ it was the four ‘sons’…and the second one was ‘wicked’….” (We won’t give away the punchline here!)

There are bound to be any number of people around the Seder table for whom The Dry Bones Passover Haggadah would be perfect – including, but not limited to, children, people not thoroughly proficient in Hebrew, and family members who may have shorter attention spans. But these aren’t the only ones likely to enjoy it. Even those who thrive on annual stacks of profound new haggadot will enjoy Kirschen’s humorous observations and asides. As with his newspaper feature, these comic strips may tease the Jewish people for our foibles but they are always loving and respectful of Jewish tradition. As far as haggadot go, this one has all the fundamentals. It may not have as much profundity as some others but it definitely has much more fun.