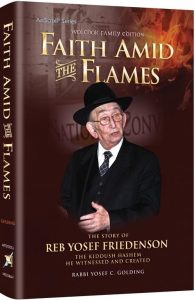 Faith Amid the Flames tells the survival story of the Polish-born Reb Yosef Friedenson, as well as his subsequent life in the United States, where he became best known as the editor of the Yiddish-language Dos Yiddishe Vort newspaper.

Reb Friedenson died in 2013, and Rabbi Yosef Golding, his son-in-law, compiled the biography from the rabbi’s decades of articles, speeches and oral biographies. Hence, the book appears in the first-person, as if written by Reb Friedenson, who related his miraculous survival from a series of ghettoes, death camps and death marches.

“I myself cannot believe the story of my miraculous survival,” he said. “After so many years of being among Yidden, and after a year and a half of being in the constant pressure of Torah giants, I had to turn into what appeared to be a full-fledged non-Jew. I took the name Joseph Tolkatcz. And, believe it or not, I was even mistaken once for a priest.”

In the States, he resumed his editorship of Dos Yiddishe Vort, that had begun in a post-war DP camp and eventually came under the aegis of Agudath Israel of America.

Reb Friedenson, in one article, shared his thoughts on the significance of Tishah B’Av: “Even while mourning, our sights are invariably set on the future . . . Even Tishah B’Av is followed by Shabbos Nachamu, which is the symbol of the indestructibility of our people . . . Our sense of Jewishness does not feed exclusively on the shared suffering of the Holocaust.”