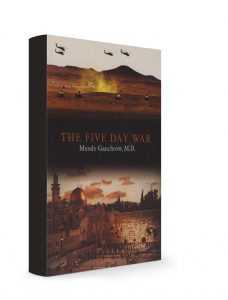 Dr. Mendy Ganchrow’s The Five Day War has the makings of a thriller.

In this imaginative, fast-paced novel, protagonist Dr. Rob Savarin is poised for a successful professional future as a qualified colo-rectal surgeon. He also has a rich inner life: he daydreams about doing something for the Jews, like becoming a Mossad agent. After all, his two heroes are Walter Mitty and James Bond. Wildly enough, Savarin’s dream comes true. A headhunting firm engaged by the Kingdom of Saudi Arabia reaches out to Savarin because his professional credentials are impeccable. This is coupled with the fact that he is not yet in private practice. Would he consider working for the Saudi Royal Air Force for three years?

Dr. Ganchrow, who served as president of the OU from 1994 to 2000, makes it clear that there is a Divine hand orchestrating these circumstances. Savarin’s biological father has an identifiably Jewish name. After Savarin’s parents’ acrimonious divorce, his mother remarried a non-Jewish man who gave Rob his non-Jewish-sounding surname “Savarin.” Providence is similarly responsible for other events in the book as Savarin “happens” to be in the right places at the right times, especially as he ministers to the health needs of the Saudi defense minister. Savarin thus becomes a source of situation-changing information valued by the Mossad, which helps the State of Israel and its unexpected Sunni allies in their fight against a nuclear Iran.

While reading this suspenseful novel, one cannot help but wonder where Dr. Ganchrow begins and Rob Savarin ends. They share much in common. Both graduated from Chicago Medical School. Both are colo-rectal surgeons. The Five Dar War’s protagonist is on the cusp of professional success. In addition to his private practice, Dr. Ganchrow served as chief of surgery at a Rockland County, New York hospital. And similar to Savarin, Dr. Ganchrow did actually receive a cold-call invitation from the Saudi Kingdom to serve as a specialty surgeon in one of their Royal Air Force hospitals. Both are religiously observant Orthodox Jews who are devoted to Israel. Both want to dedicate themselves to work on behalf of the Jewish people. Dr. Ganchrow’s vast experience in pro-Israel activism and his deep understanding of the Arab-Israeli conflict is evident throughout the book.

In addition to his lengthy and celebrated professional career, Dr. Ganchrow has been involved in Jewish communal life for decades. During the Vietnam War, he served as a US Army combat surgeon and volunteer chaplain. He achieved the rank of major and was awarded the Army Commendation Medal. While serving as a chaplain, Dr. Ganchrow conducted Shabbat and yom tov services and supervised a Pesach Seder for nearly 500 Jewish soldiers. While serving as president of the OU, he founded the OU’s Institute for Public Affairs, the forerunner of the OU Advocacy Center. Dr. Ganchrow has walked the halls of many governments around the world advocating on behalf of Israel and the Jewish people. All of these experiences are evident in this book.

Dr. Ganchrow published four previous books, including his autobiography, Journey Through the Minefields: An Orthodox Surgeon’s Odyssey (2004) and three anthologies on Jewish celebrations. The Five Day War is Dr. Ganchrow’s first foray into fiction writing. We hope he will continue to bring his expert understanding of the US-Israel relationship and the complex realities of the Middle East to the broader public via his writings.

Leah Lightman is a freelance writer living in Lawrence, New York with her family.