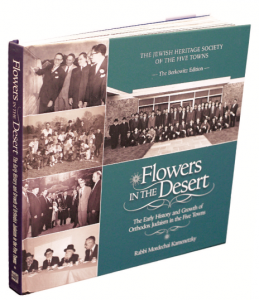 Rabbi Mordechai Kamenetzky, author of Flowers in the Desert: The Early History and Growth of Orthodox Judaism in the Five Towns, has done a masterful job of telling the story of the beginnings of the Orthodox Jewish community in New York’s Five Towns. In 252 pages of engrossing history, spiced with human-interest anecdotes and an incredible collection of photos, Rabbi Kamenetzky paints a panoramic view of the growth of Orthodox Jewish life in the Five Towns from 1956 into the 1970s.

This beautifully designed coffee-table book describes the hard work of the pioneers and founders of the synagogues, schools and communal services in a neighborhood that today has become one of the premier Orthodox Jewish communities in the greater New York metropolitan area, and by extension, in the United States.

Today the Five Towns boasts many Orthodox synagogues, schools of all genres and for all ages, a vibrant vaad hakashrut, an eruv, mikva’ot, shops, a vaad hatzedakah, Hatzalah, chevra kadisha and so much more. Little do most of the current residents realize that just sixty-five years ago, almost none of this infrastructure existed.

Many people deserve credit for helping create this community. But there is one visionary who led the pioneers in the step-by-step process of creating the synagogues and schools and the communal services that exist today. That individual was the late Rabbi Binyamin Kamenetzky, zt”l, the author’s father.

Rabbi Binyamin Kamenetzky was born in 1923 in Slabodka, a suburb of Kovno, one of the main centers of intellectual Lithuanian Jewish life. His father, the great Torah scholar Rabbi Yaakov Kamenetsky, zt”l, had studied in the prestigious Kovno Kollel. Rabbi Yaakov later became the rav in a Lithuanian town called Tzitavyan. In 1938, he had the foresight to see the danger that lay ahead; less than a year before WWII broke out, he moved with his family to Canada and eventually to the United States.

In the US, Rabbi Binyamin attended Chofetz Chaim Yeshiva and Ner Yisroel in Baltimore, Maryland, where he was ordained. He married Tzirel Spiegel, the daughter of the Ostrov-Kalushiner Rebbe and began his career in Jewish education as a second-grade rebbe in Yeshiva Toras Chaim in Brooklyn.

It was by force of Rabbi Kamenetzky’s warm personality and love for every Jew that he won over so many partners in the greater community.

The Ribbono Shel Olam had big plans for him. The book weaves one “coincidental” story after another as to how Rabbi Kamenetzky followed the markers on the trail that Hashem laid out for him, which led him to the Five Towns in 1956. There he served as the first rabbi of the Young Israel of Woodmere and helped establish the Young Israel of Lawrence and Cedarhurst.

The book tells the story of each of the Orthodox shuls that served as centers of religious life in the Five Towns before 1980. Rabbi Dr. Gilbert Klaperman, the long-serving rabbi at Congregation Beth Sholom in Lawrence, was already in the community when Rabbi Kamenetzky arrived. [Rabbi Joseph Ber Soloveitchik had encouraged Rabbi Klaperman to take the position.] Beth Sholom, whose story is told in detail, created the foundation upon which Rabbi Kamenetzky could build.

After serving for a short period as the rabbi at the Young Israel of Woodmere, Rabbi Kamenetzky was succeeded by the British-born and Mirrer Yeshiva-educated Rabbi Shaya Lebor. The shul grew under his leadership and the lay people he led played major roles in all of the schools and community institutions such as the eruv, mikvah and vaad hakashrut.

Rabbi Kamenetzky assisted in bringing a European Torah scholar, Rabbi Nuchim Kornmehl, to serve as the first rabbi of the Young Israel of Lawrence and Cedarhurst. Located between Beth Sholom and the Young Israel of Woodmere, this congregation served as an important addition to the community, since it enabled the growth of a vibrant Orthodox community stretching from Lawrence to Cedarhurst to Woodmere.

And although this is not covered in detail in the book (because it occurred after the time period addressed in the book), Rabbi Kamenetzky also established Congregation Anshei Chesed in Hewlett under the leadership of his son-in-law, Rabbi Simcha Lefkowitz.

Hence, four of the five towns now had thriving synagogues and the potential for a demographic explosion was present. Furthermore, Rabbi Kamenetzky brought his brother-in-law, Rabbi Dovid Spiegel, to the area to establish the first Chassidishe shtiebel in Cedarhurst. The Rebbe added a special heimishe flavor to Orthodox life in the Five Towns.

As the Jewish community of the Five Towns entered the ninth decade of the twentieth century, its members now had an exciting array of Orthodox shuls of all types. But Rabbi Kamenetzky did not stop there. He was instrumental in bringing Yeshiva Toras Chaim (subsequently called Yeshiva of South Shore) from Brooklyn to the Five Towns as well. In addition to the boys school, he established a girls school which eventually became independent and is now known as Torah Academy for Girls (TAG) in Far Rockaway. Later, in a time frame not covered by the book, he established a boys high school and a yeshivah gedolah in the area.

Rabbi Mordechai Kamenetzky does not limit his story to his father’s work only. He has a full chapter on the co-ed Orthodox Hillel school in the Five Towns that eventually merged with Far Rockaway’s Hebrew Institute of Long Island (HILI) to create HAFTR, which still capably services part of the community’s Orthodox population today.

While Rabbi Kamenetzky came from the world of the Litvish yeshivot, he established warm relationships with non-Orthodox rabbis and lay people. In particular, Rabbi Morris Friedman of the Conservative Temple Hillel became a partner in many of Rabbi Kamenetzky’s endeavors. It was by force of Rabbi Kamenetzky’s warm personality and love for every Jew that he won over so many partners in the greater community.

Sections of the book provide the history of the South Shore mikvah. The mikvah project was inspired by the late Max Schreiber, an advocate of the observance of the laws of family purity in America. His nephew, Rabbi David Schreiber, led a group of lay people in seeing the project through from start to finish. Rabbi Kamenetzky played a role in raising funds from the greater community for this important communal institution.

The availability of kosher food and the plethora of kosher supermarkets are trademarks of the Five Towns today—however, this should not be taken for granted. In 1956 in addition to there being no mikvah, there was no serious vaad hakashrut. Much work needed to be done. An important part of community building is lay participation, partnership and leadership. The Five Towns benefited from these with the building of the mikvah and with the creation of a vibrant and active kashrut organization, which fostered an incredible array of kosher places in which to eat and to shop. The story of the Vaad HaKashrus of the Five Towns and Far Rockaway is related in mouth-watering detail.

First and foremost, Rabbi Kamenetzky was an educator. The book explains his role as an educator of his own daughters and sons, and the decisions that had to be made to teach them Yiddishkeit on the highest level in an area where there were few options. He moved to the community with a young wife who supported his work fully. But it was not only the education of his children that concerned him. He immersed himself in many initiatives to teach Torah to the sons and daughters of other Jewish community members.

The availability of kosher food and the plethora of kosher supermarkets are trademarks of the Five Towns—however, it should not be taken for granted.

Orthodox Jews constitute a diverse community, and those with different approaches to education need to have choices of different types of schools in which to educate their children. HILI and Hillel, and eventually HAFTR, presented excellence in religious and secular education. But they were co-ed. There were no all-boys or all-girls schools in the neighborhood. And in this aspect as well, Rabbi Kamenetzky was a visionary. The story of his effort and skill in bringing so many different Jews with diverse backgrounds to support a new type of single-gender Torah education in the Five Towns is told in great detail in the book. The story is not a fairy tale. There were many roadblocks which had to be overcome.

Rabbi Kamenetzky teaches us another important lesson in this book: You cannot build a Jewish community in America without help from the local non-Jewish community. Rabbi Kamenetzky understood this very well. He forged relationships with politicians on the local, state and national levels. His warm, charismatic and charming personality enabled him, through these political connections, to obtain support for so many essential needs of the community. And the politicians learned to respect the community and to understand that it is a two-way street. If you support the community, you will see appreciation on Election Day.

Normalcy is something that is also part of Rabbi Mordechai’s memories. Not only were schools established, but also a Jewish Little League Baseball team for Orthodox kids from families of differing hashkafot. Children from different backgrounds played together and became friends. One can see how the Kamenetzky children grew up with a unique open-mindedness.

Flowers in the Desert begins in Europe and ends in modern America. Historical anecdotes of life in Lithuania and in twentieth-century America draw the reader into the book. Inspiring stories are skillfully portrayed in each of the different sections. One delightful story involves Rabbi Spiegel in his student days and the legendary Rabbi Leibel Bistritzky of Manhattan’s Lower East Side. Six lay leaders are also highlighted toward the end of the book. The story of each of them is the story of each of us. In a sense, this is what helps make the book resonate with readers.

Rabbi Kamenetzky has written this book as a tribute to his father, Rabbi Binyamin Kamenetzky, zt”l and his mother Rebbetzin Tzirel, zt”l. The book fulfills its purpose but serves as more than just a history book. It is a volume filled with generosity of spirit and respect for Jews—Orthodox and non-Orthodox—and non-Jews alike. It is a story of vision, struggle and fulfillment. It is a personal story, a Jewish story, and a story of history, family life, American life, and the opportunity that America affords to one who has a dream, embarks on a journey and eventually fulfills his dream.

Rabbi Hershel Billet is rabbi of the Young Israel of Woodmere in New York.