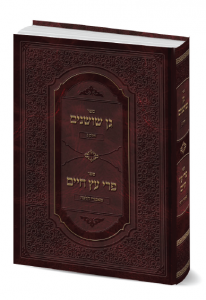 In his letter about Rabbi Menachem Genack, printed in Gan Shoshanim, Vol. 3, Rav Yosef Dov Soloveitchik describes him as an Ish HaEshkolot. Found in the mishnah and gemara (Sotah 47), this term refers to a multifaceted individual, one who excels in diverse areas and whose breadth of knowledge spans many fields. This description certainly applies to Rabbi Genack. The chief executive officer of OU Kosher and a rosh yeshivah at Yeshiva University’s Rabbi Isaac Elchanan Theological Seminary, Rabbi Genack, the author of Gan Shoshanim, is also known for his political connections and in-depth knowledge of American history.

But Rabbi Genack qualifies as an Ish HaEshkolot in other significant ways, which come across very clearly in his latest sefer; in it, he quotes talmidei chachamim from all segments of the frum world. Remarkably broad, he refers to the Rav, Rabbi Ahron Soloveichik and Rabbi Aharon Lichtenstein as well as to Rabbi Nisson Alpert, and l’hibadel l’chaim, Rabbi Hershel Schachter. At the same time, we read of conversations he has had with Rabbi Chaim Kanievsky, Rabbi Elya Ber Wachtfogel, Rabbi Avrohom Ausband, Rabbi Daniel Lander, Rabbi Sholom Spitz and Rabbi Mordechai Krausz.

In this intellectually engaging collection of essays, Rabbi Genack addresses subjects relating to Seder Moed, Shulchan Aruch, Orach Chaim and Talmudic topics. Rabbi Genack’s analysis is most often focused on the position of Rambam. He generally develops a chakirah—an intellectual query that most often presents two distinct ways to understand a particular point— and demonstrates how the Rambam sides with one of these approaches. He then proceeds to show the halachic outcomes (nafka minas) of the two approaches and often links the issue to a larger point. This focus on chakirah and Rambam is the hallmark of Brisker lomdut. But Rabbi Genack’s sefer epitomizes the Brisker derech in another way as well: he applies known Brisker concepts in novel ways. For example, he expands upon the concept of shirah, lyrical song or poetry, applying it to the mitzvah of sippur Yetziat Mitzrayim. He explains that the mitzvah is not just to tell the story but to do so in a lyrical manner. For this reason the author of the Haggadah focuses on verses taken from the mikra bikkurim, the bikkurim recitation that also contains a dimension of shirah, rather than on verses which directly discuss Yetziat Mitzrayim.

The essays in this work, all of which are in Hebrew, are brief and readable. They cover halachic topics one would expect from the CEO of OU Kosher, such as: May one grant hashgachah, kosher certification, to a company where cooking will take place on Shabbat, or would such a certification be “mesaye’a yedei ovrei aveirah—assisting those who perform aveirot”? What is the status of animals that traditionally were not eaten in Jewish communities? Can animals be considered kosher absent a clear mesorah? Rabbi Genack also provides a halachic analysis of chametz she’avar alav haPesach—chametz that was in the possession of a Jew on Pesach. He discusses the intriguing case of a non-Jewish factory owner who has a Jewish partner. The non-Jewish owner goes ahead and arranges for the sale of chametz. As is well known, non-Jews are halachically excluded from engaging as an agent, a shaliach. Can the sale conducted by an appointed rabbi in such a case be valid?

Addressing non-kashrut related matters as well, Rabbi Genack explores the scenario where one lights Chanukah candles on a Friday night—which happens to be the first night of Chanukah—but fails to recite Shehecheyanu at the time of lighting. Instead, he recites the blessing after the candles are already lit, although it is not yet Chanukah. Does he fulfill his obligation to recite Shehecheyanu, since the berachah was neither recited when he performed the mitzvah nor on the yom yov itself? After a thorough analysis, Rabbi Genack concludes that the individual has in fact fulfilled his obligation.

An added bonus in this volume is the inclusion of a section of divrei Torah authored by Rabbi Kenneth (Chaim Avraham) Schiowitz, Rabbi Genack’s son-in-law, who serves as the rabbi of Congregation Shaare Tefillah of Teaneck and chair of the Talmud Department at Ramaz Upper School. Known as a master educator, Rabbi Schiowitz wrote a number of Hebrew essays on assorted Talmudic topics. Of particular interest is the shiur Rabbi Schiowitz presents on Kiddush Hashem that was delivered by Rabbi Moshe Twersky, Hy”d, the dean of Torat Moshe Yeshiva who was murdered in the Har Nof terrorist attack three years ago. With the author’s crisp writing style and brilliant insights, this excellent sefer is sure to be appreciated by both accomplished talmidei chachamim and laypeople alike.

Rabbi Ezra Schwartz is rabbi of the Mt. Sinai Jewish Center in Manhattan.