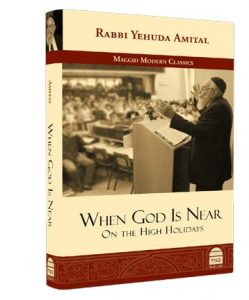 When God is Near: On the High Holidays
By Rabbi Yehuda Amital
Adapted and Edited by Rabbi Yoel
Amital, Translated by Karen Fish
Yeshivat Har Etzion/Maggid Books
Jerusalem, 2015 • 306 pages
Reviewed by Ari Kahn

When reading a book written by someone you know, and most especially books written by one’s own teacher or mentor, one can often hear his or her voice as one reads the printed words, and is transported back to the classroom or beit midrash. Reading When God Is Near: On the High Holidays by Rav Yehuda Amital, zt”l, the founder and rosh yeshivah of Yeshivat Har Etzion for four decades, provides such an experience for me.

Rav Amital spoke and taught almost exclusively in Hebrew, and during the time I spent at Yeshivat Har Etzion I don’t believe I ever heard him speak any other language. Nonetheless, despite the barriers of time, place and translation, while reading this volume of Rav Amital’s sichot (talks), I was able to hear his voice; not only the teaching voice Rav Amital used in the study hall, but his voice as shaliach tzibbur, leading his beloved yeshivah in prayer. In a certain sense, the latter may be the more important voice, for Rav Amital was, in the broadest sense of the term, a shaliach tzibbur, and it was this same role, this calling and sense of responsibility, that he strove to pass on to his students and followers.

While Rav Amital’s name may be familiar to the English-speaking public the world over, I suspect that his Torah is not as well known; perhaps this is one of the many unfortunate byproducts of the divide between Religious Zionism and its close relative in the Diaspora, Modern Orthodoxy. While these two communities face different challenges, the points of similarity between them make the work under discussion (and others like it) all the more important to the observant English-speaking community outside the Land of Israel. Admittedly, few American roshei yeshivah will dedicate a key lecture or lesson to those who are not present in the room, as Rav Amital did regarding talmidim who were absent due to active military service. However, the underlying orientation, the educational message, the challenge presented by Rav Amital’s sichot, should speak to every rosh yeshivah and student: to raise students who serve the larger community and are engaged with the world beyond the parochial confines of the beit midrash.

When God Is Near is comprised of lecture notes and transcriptions of short pre-selichot, Rosh Hashanah and Yom Kippur talks that Rav Amital delivered at Yeshivat Har Etzion. Each of these sichot shimmers with the holiness of the Days of Awe, while at the same time giving the reader a taste of Rav Amital’s personal Torah. As a whole, this book is about responsibility. It is about personal greatness. Its foci are man, God and change. At various junctures, the reader may get the sense that Rav Amital was addressing himself, or perhaps giving us a glimpse into his inner world. Rav Amital’s greatness as a teacher is apparent. In each sichah he attempts not merely to impart information, but to mold and inspire his students and to pass on to them his own passion for Torat Yisrael, Am Yisrael and Eretz Yisrael.

Rav Amital proves to be a sensitive reader of texts, whether the text in question is Biblical, rabbinic or liturgical—but that is only the point of departure for many of these sichot. His vivid imagination and ability to paint a picture for his audience are, quite literally, inspiring. Rav Amital explains the basis for these flights of imaginative fancy: in The Kuzari, Rabbi Yehuda Halevi encourages us to visualize the significant events of Jewish history, including the Revelation at Sinai and Akeidat Yitzchak (p. 171). Rav Amital rises brilliantly to this challenge, and throughout When God Is Near, he shares with us what he sees: deliberations between Biblical characters, scenes that he imagines taking place in Heaven and so much more. Similarly, his insights are often illustrated with scenes from his own past—the Europe of his childhood or the war years, his experiences as a lone survivor and his participation in the great drama of building a new country in a very old land.

In the book, the concept of teshuvah (repentance) is transformed from an individual concern into an issue of community responsibility. Unlike those who take great pride in the unprecedented numbers of Jews currently studying Torah, Rav Amital laments the unprecedented number of Jews who are distanced from Torah or who have rejected Torah outright. Despite having been born into a Chassidic Hungarian-Jewish family, Rav Amital fell under the influence of Rav Avraham Yitzchak HaKohen Kook from a very early age; remarkably, Rav Amital managed to acquire and hold on to Rav Kook’s writings throughout his years in Nazi labor camps. Rav Kook’s concept of teshuvah as a national goal, and not merely as a personal quest, was a major influence on Rav Amital, who would not allow himself to be satisfied with life ensconced in his yeshivah when secularism was ravaging the Jewish community just beyond the walls of the beit midrash. 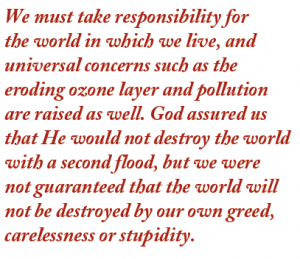 In this context, Rav Amital draws upon a daring teaching of the Chassidic master Rabbi Tzadok HaKohen of Lublin: if a person’s self-identification or identification by others is Jewish, this is sufficient reason to allow their conversion—even if his or her acceptance of mitzvot is lacking (p. 214). The collective Nation of Israel includes all those “to whom the name Israel is applied,” and the holiness of the Jewish People falls equally on those for whom the sobriquet “Jew” is their only connection to Judaism. Rav Amital stressed that the purifying power of Yom Kippur is available to these Jews as well, even though their knowledge and practice may be limited when compared to that of the yeshivah student.

Rav Amital’s message is clear: the privileged and entitled yeshivah student should feel a deep sense of responsibility for the larger community, and never feel superior to other Jews simply because circumstances provided him with a better Jewish education. Our introspection on Yom Kippur, then, must encompass the collective, with all its disparate elements, and we must pause and consider whether or not we have met our responsibility to the Nation of Israel. Additionally, we are called upon to take stock of our behavior as citizens of the even-larger collective: human beings. We must take responsibility for the world in which we live, and universal concerns such as the eroding ozone layer and pollution are raised as well. God assured us that He would not destroy the world with a second flood, but we were not guaranteed that the world will not be destroyed by our own greed, carelessness or stupidity (p. 149).

For the most part, the chapters of When God Is Near are undated, an unfortunate editorial oversight in a work so firmly rooted in the author’s personal vision. For example, the many discussions of Akeidat Yitzchak leave the reader in need of a chronological anchor. Rav Amital wonders aloud about Avraham’s emotions, thoughts and words as he made his way toward the holy mountain, his beloved son at his side. What personal akeidah of the author, we wonder, haunts each of these sichot? Is it the loss of Rav Amital’s entire extended family or of European Jewry as a whole? Is it the loss of his beloved students, killed while heroically defending the Land of Israel and its people that colors his analysis of the Akeidah? In one particular essay, Rav Amital contrasts the willingness of the father to sacrifice his son and the willingness of the son to be sacrificed with the “shaheed” (suicide terrorist). He reports searching through midrashic literature, to no avail; he could not find even one midrash in which either Avraham or Yitzchak are assured of a share in the World to Come after the Akeidah. Rav Amital goes on to express theological disappointment with those who believe in an abstract, non-corporeal God on the one hand, but whose vision of Heaven is obsessively tangible, “a place where they can realize their wildest and ugliest fantasies” (p. 157). Had this essay been placed in historical or political context, the message would have been far more poignant.

I admit that I am unaccustomed to reading Rav Amital’s words in English (although this is not the first volume of his teachings that has been translated). At times the translation in When God Is Near is a bit formal. Often, a phrase or verse that is used as the starting point for an essay would be more easily understood in the original Hebrew. Though there are occasional transliterations, they are too few and far between. In fact, it would have been far more helpful to quote Biblical verses and quotations from the liturgy in Hebrew; even for the average English-speaker, these basic texts are far more familiar in the original.

Despite these minor complaints, this is an important book. Rav Amital was a great teacher and the leader of a large and important community. He charged his students to take responsibility. He taught them to be independent, he groomed them to lead and he called upon them to be holy and to sanctify God’s Name—and never to desecrate it. Unfortunately, Rav Amital’s voice is largely unheard in many of the communities that have the most to gain from his teachings. Those who are unfamiliar with his work would do well to learn his Torah, hear and heed his unique voice and accept his challenge: dare to be great.

Rabbi Ari Kahn is director of Foreign Student Programs at Bar-Ilan University in Israel, where he also is a senior lecturer in Jewish studies. He is also a senior educator at MATAN. A renowned speaker, Rabbi Kahn has lectured worldwide and has authored many articles on the weekly parashah and holidays, as well as Echoes of Eden, a five-volume series on Chumash published by OU Press and Gefen Publishing.