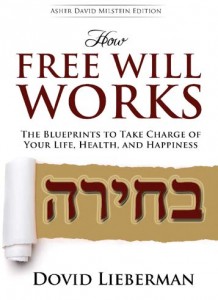 Isaac Bashevis Singer, the Nobel prize-winning Yiddish author, was once famously asked, “Do you believe in free will?” He wryly replied, “Of course! Do I have a choice?”

In spite of the seeming contradiction, Judaism has unequivocally affirmed that we have no choice but to believe that we are free to act in accord with our own wishes, to personally decide upon the meaning of our lives and our purpose, to chart our own destinies—and, what’s more, to determine our place in the World to Come based on our free willed resolutions here on Earth. As Maimonides put it in his Mishneh Torah, Laws of Repentance:

If God decreed that a person should be righteous or wicked, or if there was some force inherent in his nature which irresistibly drew him to a particular course . . . how could God have commanded us through the prophets, “Do this and do not do that, improve your ways and do not follow your wicked impulses,” when from the beginning of his existence, a person’s destiny had already been decreed?. . . What room would there be for the whole of the Torah? By what right or justice could God punish the wicked or reward the righteous? “Shall not the judge of all the earth act justly?” [Genesis 18:25]

In his just published new work, How Free Will Works: The Blueprints To Take Charge Of Your Life, Health, And Happiness, Dovid Lieberman adds his insights to a problem that has perplexed the greatest minds throughout the generations. Remarkably enough, he is able to bring valuable ideas to the discussion that deserve wide readership, serious thought and, in a number of areas, practical application.

As Lieberman makes clear—strangely enough, to my mind, in an easily overlooked footnote—“Proving the existence of free will is not this book’s objective . . . The Rambam summarizes its obvious and necessary place in creation.” For a believer, the truth of free will must be a starting point for faith. Lieberman does spend some time crystallizing possible ways in which, based on the most current scientific thought, Divine omniscience does not preclude personal choice. He quotes Albert Einstein’s famous dictum that “the distinction between the past, present and future is only a stubbornly persistent illusion.” Incorporating ideas from the field of quantum physics, he introduces us to the findings of Dr. John Wheeler, one of the world’s leading theoretical physicists, who demonstrated that an observation in the present can retroactively cause the emergence into reality of an event that occurred in the past—regardless of whether the outcome should logically have been determined long ago.

With regard to the seemingly preordained determinism resulting from our heredity and/or environment, Lieberman makes the important point that modern findings prove what our sages said long ago: Circumstances do not relate to life satisfaction, but subjective feelings do—and subjective feelings are a direct reflection of our choices, not conditions. Quoting research recently published out of Harvard University, he points out that “only 10 percent of our long-term happiness is predicted by the external world; 90 percent of our long-term happiness is dependent on how our brain processes the external world.” This view makes our lives a story scripted by our own pens and limited only by our own character and self-chosen dreams.

The publisher’s blurb on the flyleaf emphasizes how this book “sheds fascinating light on the cosmic network of interlacing forces that operate in creation—such as Divine Providence, mazal and prayer—and reveals the power and parameters assigned to each.” But truth be told, that is not what I found to be the most effective or illuminating aspect of the book.

One of the problems publishers face is how best to categorize a work: where does this book best belong on the shelves? Should it be found in the section of theology, philosophy or Judaica? My choice would be the self-help section. Rather than stressing the title itself, How Free Will Works, I personally found the subtitle more revealing: The Blueprints To Take Charge Of Your Life, Health, And Happiness.

Lieberman’s scholarship is extraordinary, both in Jewish sources and with regard to contemporary findings in the fields of psychology and sociology. From these areas of expertise he espouses a philosophy rooted primarily in the need for self-fulfillment.

We each stand on a never-ending ladder whose starting point is irrelevant. We might be capable of climbing easily but choose to be complacent and climb only a few rungs at our leisure. Genuine progress—and therefore self-esteem and emotional health—is assessed only through looking at our efforts in relation to our ability. Pioneering psychologist Abraham Maslow succinctly summarizes this point: “If you plan on being anything less than you are capable of being, you will probably be unhappy all the days of your life.”

As he does throughout the book, Lieberman deftly illustrates the point by way of a profound midrashic teaching. The severity of Jewish slavery in Egypt was exemplified by the fact that the Israelites were forced to build entire structures on a foundation of sand, structures that promptly collapsed. The most profound pain is to recognize that one’s efforts have no purpose. That is why it becomes so urgent for us to choose a life’s purpose. “The surest path to misery is to continue to put up with all the things that do not work in our lives but are not quite bad enough to make us feel that we must change them. Human beings can become used to almost anything. That’s both the good news and the bad.”

Lieberman does not preach. He offers concrete suggestions for willfully reshaping our concept of self and altering our behavior—ways to enable us to choose what is in our best interest—by way of Talmudic dictums as validated by current research. For example, when the Mishnah recommends that we run to perform even a minor mitzvah because “one mitzvah leads to another mitzvah,” Lieberman offers a fascinating study in which researchers asked homeowners if they would allow the inspectors to place a large “Drive Carefully” sign in their front yards. Only 17 percent gave permission. When other residents were approached with the request to put up a smaller, three-inch “Be A Safe Driver” window sign, nearly all immediately agreed. Just a few weeks later, when they were subsequently approached and asked to place the gigantic sign on their front lawns, this latter group overwhelmingly agreed. Simply put, because they had consented to the smaller request and reshaped their self-perception to include the definition that they were serious about road safety, it was not difficult at all to get them to accede to the larger request confirming their previous internal commitment to the cause. We can learn to choose well if we understand the proper mechanism to encourage correct responses.

The most profound pain is to recognize that one’s efforts have no purpose. That is why it becomes so urgent for us to choose a life’s purpose.

Reading the many examples offered to help us make more morally rewarding decisions, we come away with the conviction that not only do we in fact have the ability to choose the direction of our lives, but that exercising that Divine gift of freedom—the ability that perhaps most identifies us as being Godlike—can be the greatest determinant of our spiritual, emotional and physical well-being. Not a small return for reading an enlightening book.

Rabbi Benjamin Blech is an internationally recognized educator, religious leader, author and lecturer. He is a professor of Talmud at Yeshiva University, is a regular contributor on Aish.com, and is a frequent lecturer in Jewish communities around the world. He is the author of fifteen best-selling books; the latest book, The Sistine Chapel: Michelangelo’s Forbidden Messages in the Heart of the Vatican (New York, 2009), is now available in twenty-five countries and TV and movie rights are being negotiated. Rabbi Blech lives in New York.