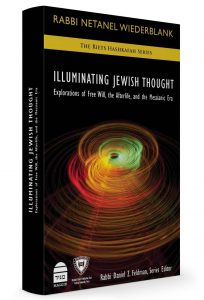 Rarely does a book embody the essence of the author’s persona as much as Rabbi Netanel Wiederblank’s new sefer, Illuminating Jewish Thought: Explorations of Free Will, the Afterlife, and the Messianic Era. This is great news for anyone who craves vast knowledge through a prism of clarity and humility.

Rabbi Wiederblank, only a few years my senior, was already a cornerstone of Yeshiva University’s beit midrash during my years studying at the Rabbi Isaac Elchanan Theological Seminary (RIETS). He was someone you went to if you were interested in an in-depth analysis or obscure sources on any given topic of Gemara, halachah or hashkafah. He has the rare blend of being approachable, comprehensive and comprehensible.

In an ever-continuing effort by RIETS to improve and perfect its semichah program, Rabbi Wiederblank was asked to deliver a Friday morning series on Jewish thought for semichah students. The current volume of Illuminating Jewish Thought, which focuses on free will, the afterlife and the Messianic era, is the first of three books to be generated from this set of shiurim.

Not many people could strike the delicate balance of presenting such weighty topics in a clear, yet not overbearing, fashion. This is not a whitewashed, watered-down, simplistic or monolithic presentation. Rather, it is a nuanced, in-depth look at a diversity of viewpoints, with a refreshing range of authors quoted. Besides the usual Medieval titans of Jewish philosophy, such as Rabbi Saadia Gaon, Rambam, Ramban, Ralbag, Rabbi Yehuda Halevi and Rabbi Yosef Albo, among others, there is also a host of later thinkers from all different categories of thought, including Maharal, Ramchal, Rabbi Mordechai Yosef Leiner (the Izbitzer), the Tanya, Rabbi Tzadok, Rabbi Avraham Yitzchak HaKohen Kook, Rabbi Eliyahu Eliezer Dessler, Rabbi Joseph B. Soloveitchik and more. After reading the spectrum of opinions with analysis, one walks away comforted that there may not be conclusive, cookie-cutter answers to these complex questions.

Illuminating Jewish Thought is geared for educators and laypeople alike, although it isn’t exactly bedtime reading. The book reads like a shiur or guided study session, with primary sources quoted and translated in full. The goal is for the reader to grapple with the text, rather than be told what the text says. This serves as the book’s strength as well as its potential weakness, depending on the nature of the reader. Readers who get excited about ideas and enjoy grappling with fascinating subject matter will love the fact that Rabbi Wiederblank goes off on intriguing tangents (one particular excursus takes up forty pages!); anticipates most questions one may have on the topic; and addresses them with numerous sources. However, if you are looking for a quick rundown of opinions, this book is not for you. Perhaps a second version of the book with paraphrases instead of full sources, summaries of the main concepts, and use of footnotes for the more tangential elements would be a helpful companion piece either for review or for those who want the core ideas but aren’t interested in studying it in depth.

Although Rabbi Wiederblank dabbles with academia by occasionally quoting historians, philosophers, psychologists and scientists, the book is not meant as an academic treatment of any particular subject. As he points out in the preface, the sources are generally lumped together by topic in an ahistorical manner and are not analyzed based on the historical or broader philosophical approach of the given commentators. While such an endeavor was clearly not within the purview of the book, I sometimes found myself wanting a second level of analysis where such distinctions were taken into account.

Some of the topics addressed in the free will section that may pique your interest include how to reconcile free will with Divine foreknowledge (seven answers are presented), understanding the problem of evil, the role of nature and nurture in decision-making, whether people can control and change anything about themselves, and Pharaoh’s seeming lack of free will (another seven answers).

In presenting the concepts of the afterlife, Rabbi Wiederblank first deals with the issue of the proper motivation one should have while performing mitzvot, and how the physical reward and punishment mentioned in the Torah don’t seem to jibe at first look with the spiritual rewards we conjure up when thinking about the World to Come. He then addresses the fundamental dispute between Rambam and Ramban as to how to understand Olam Haba, how they differ in their understanding of the role of body and soul and the ramifications for techiyat hametim. The section finishes off with an explanation of the concepts of Gan Eden and Gehinnom, including an elucidation as to the usage of these concepts in recent works to help mold character.

The final section of the book explores the concept of Mashiach, starting with sources in Tanach. It then goes on to explain the importance of believing in Mashiach, as well as practical questions of how to identify Mashiach and the problem of false Messiahs. Debates as to what will happen during the times of Mashiach are addressed as well, including whether there will be any fundamental shifts in human nature or the natural order and whether sacrifices will be brought. Finally, sources as to when Mashiach will arrive are analyzed, including the significance of the year 6,000 and the concepts of Mashiach ben Yosef, Gog U’Magog and the role of the State of Israel in the redemptive process.

I highly recommend this book to anyone who is interested in mining the vast literature of Jewish sources on topics that cut to the core of who we are as humans and what the Jewish vision for the ultimate future looks like. It can be used for self-study, book clubs, prompts for deep discussions at the Shabbat table, or even as a template to deliver classes. With a plethora of material on multiple thought-provoking topics, Illuminating Jewish Thought is sure to be an important addition to any library.

Rabbi Dr. Mordechai Schiffman is the assistant rabbi at Kingsway Jewish Center and a licensed psychologist practicing in Brooklyn and Manhattan. His writings on the intersection of Torah and psychology can be found at PsychedForTorah.com.