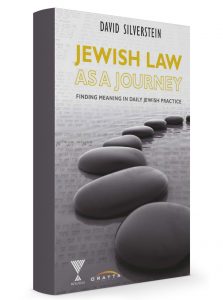 Rabbi David Silverstein’s new book, Jewish Law as a Journey: Finding Meaning in Daily Jewish Practice, has an admirable goal—to help make the observance of everyday halachot meaningful and to encourage the reader to use the mitzvot as an opportunity for spiritual growth and connection. An outgrowth of the author’s course on the philosophy of Jewish law at Orayta, a yeshivah in Jerusalem, the book explores religious practices including putting on tefillin, engaging in prayer and washing one’s hands before eating bread, along with more transcendent mitzvot such as ethical living and loving God. For all of the mitzvot he covers, Rabbi Silverstein, the sgan (assistant) rosh yeshivah at Orayta, offers textual background as well as a variety of approaches regarding the rationale.

The author’s premise is that “in its ideal vision, Jewish law demands that a person understand the rationale behind the mitzvot, and therefore be spiritually transformed by the divine messages imbedded in mitzvah observance.” The term “rationale,” which is central to Rabbi Silverstein’s approach, can be used to denote the motivation leading someone to a particular course of action; it can also be used to describe a rational basis which is inferred or constructed.

The same ambiguity applies to the term “ta’amei hamitzvot,” which the author translates as “the reasons for the mitzvot” but could also be translated as the “taste” or the “emphasis” of the mitzvot. Rabbi Silverstein clearly uses “rationale” and “ta’amei hamitzvot” to imply the meaning discovered within the commandments as opposed to that which justifies observing them.

He discusses the “larger religious messages inherent in traditional Jewish observance” and “an increased focus on the search for meaning.” Likewise, he makes it clear that “the reasons themselves are not why we observe the law.”

The author does not imply that there is a distinct, discernible objective which God intended to achieve with each mitzvah. Rather, he aims to show how each particular ritual, as well as mitzvah observance in general, is ideally suited to inculcate and cultivate certain spiritual values, ideals and states of consciousness.

The author does not shrink from pointing out the dangers of overemphasizing meaning; “Overemphasis on meaning can generate a halakhic model that is self-centered and ultimately rooted in the ego,” he writes. “A commitment to halakha that is exclusively rooted in meaning fails to affirm the central roles of trust and confidence in developing a meaningful relationship to G-d.”

Written for an Orthodox English-speaking audience, the book is thoroughly documented with many footnotes, and includes many insights from well-known contemporary figures, including Rabbi Dr. Yakov Nagen, Rabbi Eliezer Melamed and Rabbi Lord Jonathan Sacks.

One point that deserves mention is the almost complete lack of Chassidic sources. In the book’s nearly 300 pages, I was able to find only five instances where an explanation was a based on a Chassidic source. This is surprising in light of the fact that the early Chassidic rebbes particularly emphasized the inner aspect of Torah.

In its ideal vision, Jewish law demands that a person understand the rationale behind the mitzvot, and therefore be spiritually transformed by the divine messages imbedded in mitzvah observance.

In the chapter on the requirement to wear a kippah, the author opens with the traditional turban worn by the High Priest and the Malbim’s explanation that it was meant to induce feelings of humility. This is followed by the Talmudic story centering on Rabbi Nachman bar Yitzchak, whose mother made sure his head was always covered in his youth to ensure that he retained the fear of Heaven; the Talmudic story notes that when the boy’s head was uncovered, his baser instincts began to take control of him.

Rabbi Silverstein states that by the time of the Rishonim, head coverings for men seem to have become universally mandatory in Jewish communities. He views this as the period when head covering for men shifts from being a practice rooted in piety to one rooted in religious identification. In this regard, he cites the Terumat HaDeshen, who emphasizes the role of head covering as a symbol of religious identification, and Rabbi Israel of Bruna who justifies placing a ban on those who habitually go about bareheaded.

The author goes on to cite Rabbi Moshe Feinstein, who discusses the question of whether or not one should wear a kippah and identify as a Jew even while transgressing; Rabbi Feinstein concludes that as long as one is not engaged in an act of absolute chillul Hashem, a kippah should be worn even in compromising situations. He then quotes Rabbi Ovadia Yosef who states that even in a community where all are known to be Jews, such as in modern Israel, a kippah must still be worn as a sign that one is committed to keeping mitzvot.

The author also explores the meaning behind praying with a minyan, a discussion he opens with the Talmudic story of Rabbi Akiva, who would say brief and subdued prayers with the congregation and long and histrionic ones by himself. The story demonstrates that public prayer does carry a certain cost in terms of personal expression, yet nevertheless remains paramount. He cites Rabbi Feinstein’s ruling that praying with a minyan is preferable even if it comes at the cost of learning Torah. To stress the importance of a minyan, Rabbi Silverstein cites the Talmudic passage in which Rabbi Natan asserts that “God does not despise the prayers of the congregation;” he mentions the benefit of having Jews of varying spiritual levels join together for prayer. Then quoting the Chofetz Chaim and the Kuzari, he introduces the idea of “spiritual teamwork,” the notion that public prayer is not just a compilation or an intensification of private prayers, but a unique collective endeavor.

In light of the story in Berachot which refers to one who neglects participating in a minyan as a “bad neighbor,” Rabbi Silverstein suggests that such conduct cultivates a self-centered posture. He goes on to quote Rabbi Avraham Yitzchak HaKohen Kook, who emphasizes the content of the prayers: lone prayer tends to focus on the needs of the individual and neglects praying for the needs of the community. Thus, Rabbi Silverstein asserts that public prayer compels us to be constantly aware of the presence and needs of others.

After briefly summarizing the halachic views regarding the obligation of public prayer, the chapter then shifts to the unique importance of praying in a synagogue. The author mentions the ruling of Rabbeinu Yonah that even private prayers should preferably be recited in shul.

Explaining why he included men-only mitzvot in his book—such as wearing a kippah and tzitzit and praying in a minyan—he writes: “Some of these rituals are traditionally performed only by men, but I decided to include them nonetheless since the values they underscore are relevant to all Jews.” This explanation could equally justify including some women-only or women-oriented mitzvot such as candlelighting or reciting the blessing She’asani Kirtzono. Including mitzvot that shed light on the distinct spiritual ideals of men and women would have been a valuable addition.

Jewish Law as a Journey is an excellent resource for the committed Jew to obtain thoughtful, well-documented insights into how we can infuse our everyday mitzvah practices with greater consciousness of their larger spiritual meaning and the realization of the Torah’s spiritual and ethical ideals.

Rabbi Asher Meir is the author of Meaning in Mitzvot (Jerusalem, 2005), which delves into the deeper meaning of our daily halachic practices and The Jewish Ethicist (New Jersey, 2003) which discusses ethical dilemmas from a halachic perspective. He currently works as a policy economist at the Kohelet Policy Forum.