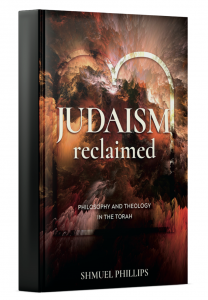 Judaism Reclaimed is a masterful compendium of philosophical and theological discussions, each based on some verse or incident in the weekly Torah portion. The author of these analyses, Rabbi Shmuel Phillips, hails from the United Kingdom and currently resides in Israel. He spent two decades studying in yeshivah and kollel and earned a law degree from the University of London.

When I started reading Judaism Reclaimed, I was struck by several nitpicky thoughts as to what I might have done differently. For example, why was it necessary to organize the material by the weekly sedrah? As a general rule, I eschew tying articles to the parashat hashavuah in an attempt to keep them evergreen. Why, I wondered, would Rabbi Phillips limit potential readership on such important topics to particular weeks? As I got further into the work, however, I came around to the author’s way of thinking.

Yes, each installment ties clearly into some aspect or other of the weekly Torah portion. For example, the curse that Noach placed upon one of his descendants is used as a springboard to examine the cultural traits of various nations as seen through the philosophy of Rabbi Samson Raphael Hirsch. The political hierarchies that are the subject of Parashat Shoftim become an impetus to examine, through the analysis of the Netziv, what leadership model the Torah might or might not consider ideal. The connection of each chapter to a sedrah, however, doesn’t make it feel like parashah study; it does provide a framework to guide readers through the sefer on a particular schedule, should readers opt for such an approach. It’s a true win-win.

Another aspect about which I was uncertain was that several chapters serve to critique other works, such as two chapters dedicated to Professor Marc Shapiro’s controversial The Limits of Orthodox Theology (Liverpool, England, 2011). Why, I questioned, would readers unfamiliar with these works be interested in essays critiquing them? Once again, my skepticism was assuaged. When Rabbi Phillips has occasion to analyze another work, he presents its points clearly and fairly, and its relevance in Judaism Reclaimed goes beyond a mere book review. For example, Rabbi Phillips’ critique of Rabbi Binyamin Lau’s The Sages: Character, Context & Creativity, Vol. 1 (Jerusalem, Israel, 2010) doesn’t only address the origins of our hermeneutical rules, it represents the culmination of ideas that wend their way through several discrete essays. Each is complete in its own right, but the interplay of topics through the various chapters is all the more fulfilling.

Among the many personalities whose positions on various theological matters are examined throughout this hefty tome, one will find the likes of Rambam, Ramban, Ran, Maharal, Rabbi Hirsch, Rabbi Joseph B. Soloveitchik and many others. As a staunch rationalist, I am gratified by the attention paid to the Rambam and his approach, over a number of other authorities whose more mystical approaches the author might have selected. Aware that some readers might have preferred the other approach, Rabbi Phillips addresses his decision in the introduction. He cites Rabbi Shalom Mordechai Schwadron on the subject of Israel’s comparison to a dove:

All other birds rest on a rock or a tree when they tire, but when the dove tires, she pushes off the ground with one wing and flies with the other.

Our two wings, Rabbi Schwadron informs us, through Rabbi Phillips, are the rationalist/intellectual approach and the spiritual/mystical approach. Both wings are necessary to fly, and when one fails us, we rely on the other. This Rabbi Phillips accomplishes with great grace.

The scope of topics addressed is as broad as the palette of authorities into which the author dips his pen. Such fundamental concepts as chosen nationhood, ancestral merit, Divine Providence and the Oral Law are treated with surprising depth given the relative brevity of each of the seventy (!) chapters. Readers may be aware that to count the Jews would result in a plague but perhaps not why that should be; this is clarified by looking through the prism of the Malbim. The concept of yeridat hadorot (the decline of generations) is examined through the lens of the Meshech Chochmah and related to the tochachah in Parashat Behar-Bechukotai. The final chapters of the book tackle such weighty issues as the nature of punishment in Gehenom and of the ultimate revival of the dead.

Among the many personalities whose positions on various theological matters are examined throughout this hefty tome, one will find the likes of Rambam, Ramban . . . Rabbi Joseph B. Soloveitchik and many others.

Discussions are not limited to the realm of the strictly philosophical; questions of contemporary import are likewise discussed. An analysis of how to proceed when science appears to contradict accepted Torah knowledge cites not only Rambam but also Rabbi Tzvi Hirsch Chajes, Rabbi Eliyahu Dessler and Rabbi Lord Jonathan Sacks, among others. (Additional sources in the footnotes include not only Rabbi Yisroel Belsky, but the diametrically opposed writers Rabbi Moshe Meiselman and Rabbi Natan Slifkin.) Rabbi Phillips’ personal position on this matter is the well-reasoned (and far too rare) idea that “science and religion can never (truly) clash” because the former “examines the physical world . . . and develops theories as to how it works,” while the latter “offers meaning as to why the universe exists and operates.”

Let’s examine a sample question from Parashat Ki Tisa. The Talmud in Berachot (32a), discussing the place name “Di Zahav,” posits that Moshe “blamed” God for the sin of the Golden Calf as a natural consequence of the gold that He lavished upon the Israelites. (According to the Talmud, God conceded to Moshe’s charge, citing Hoshe’a 2:10.) Now consider that the Ramban (Bereishit 22:1) makes explicit the idea that God does not give a person a challenge that he is not capable of overcoming. This presents us with something of a dilemma: If the entire nation possesses the ability to overcome the temptation presented by the excessive gold, then it wouldn’t be much of a challenge for the more spiritually advanced members. Conversely, if the test challenges those more developed members, how could the rank-and-file Jews possibly be expected to pass? What ensues is a discussion of the relative merits of inclusivity vs. exclusivity and its relevance in different educational models, i.e., the Lithuanian model (which catered to the highest-level students to the potential detriment of the less gifted) and the Frankfurt model (in which most students could succeed but the most gifted might not have been raised to their highest potential). Rabbi Phillips cites Rabbi Shimon Schwab that both models have precedent dating back to the Tannaim.

Of course, with so many topics and so many approaches, not every section can be the reader’s favorite. I, for one, did not find the chapter “Gender Roles and Women Judges” (Parashat Tazria-Metzora) the most compelling in the book. This wasn’t because I found it too strict for modern tastes, nor too lenient for traditional tastes; I just didn’t happen to find the road from point A to point B as persuasive as I did the journeys undertaken in most other chapters. Nevertheless, I found an oblique reference to gender issues in a footnote on Parashat Mattot-Masei1 perhaps more compelling than the author intended—so much so that I intend to cite Rabbi Phillips’ incidental observation in future discussions of the topic.2 (Oddly enough, the footnote ties into an earlier essay on Parashat Emor, “Intellect over Emotion in the Service of God,” rather than to the aforementioned chapter on gender roles.)

I return to Rabbi Phillips’ introduction in which he writes:

It would be arrogant to imagine that I have fully resolved any of the profound and complex questions which will be discussed in the upcoming pages, many of which are deserving of a whole book in their own right.

This is no false modesty on the author’s part. Each of the topics he addresses is not only bigger than a mere chapter or two, it’s bigger than us. If Rambam, Ramban, Maharal and their contemporaries did not already lay any of these questions to rest, it would be unreasonable for readers to place such responsibility on Rabbi Phillips’ shoulders. But Rabbi Phillips has done an exceptional job in curating the classics of Jewish thought, as well as a few outsiders like Einstein and Orwell, and consolidating their varied views into dozens of insightful and illuminating articles that can be embraced and appreciated by scholars and lay readers alike.

1. Referring to the emotion that must have been experienced by the Yisraelim when obligated to cease offering on bamot in favor of the Kohanim performing the service exclusively, Rabbi Phillips notes, “This feeling of detachment and displacement . . . may be said to echo some of the contemporary discussions regarding the role of women in public tefillah.” His note goes on to refer us to a chapter on “subjective fulfillment in Judaism” and a Biblical verse that underscores the connection between Temple sacrifices and prayer.

2. The idea that “some mitzvot are for men, some are for women; some are for Kohanim, some are for Yisraelim” is hardly novel, but the added observation that non-Kohanim at some point had to withdraw from an important part of the service is, to this writer, a new wrinkle.