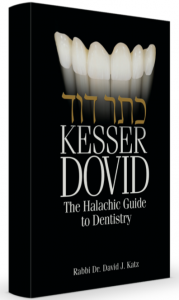 When I left yeshivah and began dental school almost thirty years ago, several of my friends remarked that I had chosen a “good” field because there are not too many halachic issues to contend with in dentistry. Within the first few days I realized that this was simply not the case. I began compiling a list of halachic questions that came up and I spoke with my rav on a regular basis to determine how to proceed. At that time, there were almost no broadly available resources on dentistry and halachah. Occasionally, I would come across a few articles dealing with issues such as what constitutes a chatzitzah (a barrier when immersing in the mikvah) or how to handle dentures on Pesach. One article I recall addressed emergency dental treatment on Shabbat. When it came to she’eilot involving insurance, patient financing, et cetera, we had to extrapolate from the broader literature on medical halachah. In the early 1990s, the Association of Orthodox Jewish Scientists organized two yemei iyun in which the topic of halachah and dentistry was covered; nevertheless, in general each dentist was on his own, not only to ask she’eilot, but also to determine when she’eilot needed to be asked. Frum patients were also in the dark, as many were not aware of the halachic issues that arose in the course of their treatment.

With the recent publication of Rabbi Dr. David J. Katz’s sefer entitled Kesser Dovid: The Halachic Guide to Dentistry, the situation has been greatly remedied. In this work of nearly 500 pages, Dr. Katz analyzes many of the issues facing dentists and their patients. Each section begins with a short introduction and historical background of the subject under discussion. The author traces each topic from the relevant Talmudic sources through the classical Rishonim and Acharonim and concludes with the halachic opinions of the major contemporary posekim. Dr. Katz clearly demonstrates his deep understanding of the gamut of dentistry. Every dental procedure is elucidated, making the sefer understandable for readers without a medical background. As an example, one chapter deals with the permissibility of undergoing elective or purely cosmetic procedures. The gemara in Bava Kama records a debate about whether self-wounding is a Biblical or rabbinic prohibition, and the halachah is codified in the Shulchan Aruch. Clearly, wounding for the purpose of healing (e.g., surgery) is permitted, but what about procedures that are not explicitly required? Is a procedure for cosmetic purposes considered “refuah” or not? And if not, if a patient gives consent, is that considered as if he wounded himself? The author raises this as well as several other concerns. Many posekim are of the opinion that if the real or perceived aesthetic lack is potentially psychologically detrimental, then certain interventions are allowed. In light of this ruling, Dr. Katz analyzes procedures such as veneering teeth, gingival contouring and Botox use. The book concludes with a chapter on dental and oral health issues found in Tanach and in rabbinic literature.

Although the standard caveat about not determining halachah based on non-primary sources applies here as well, the book serves as an invaluable resource in understanding the issues that could arise in the field of dentistry. This book will be greatly appreciated not only by dentists and rabbis but by those with an interest in the interface of medicine and halachah. It is my sincere hope that this book will be the first of many by Dr. Katz and that it will inspire others to compose more works of this nature.

Dr. Stuart Abrahams is the dental director at a New York City-based health fund. He received semichah from Rav Yaakov Rosenthal, zt”l, in 2004.