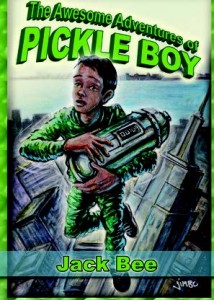 The Awesome Adventures of Pickle Boy is a rousing action adventure plucked straight out of the hyper-fueled fantasy world of middle school boys.

Danny Green is an average eleven-year-old boy living with his average family in New York City when, quite by accident, he discovers a hidden cache of pickle juice in his basement and drinks it. Danny is immediately transformed into an action hero with supernatural abilities and a desire to right the wrongs he sees in the world. But Danny is still just a kid and he’s up against some serious villains. The Mafia, street gangs and Al-Qaeda terrorists are just a few of the bad guys Danny faces as he tries to navigate the very real perils of a dangerous world.

Pickle Boy is not an overtly Jewish book—aside from the character’s implied ethnicity, there is no actual Jewish content—but it is an old-fashioned adventure, the kind we don’t often see in the secular market. The characters are pre-teen boys who are not grappling with any of the dating and relationship issues that are so prevalent in today’s young adult literature. In this sense, the book is a kosher alternative for tweens. There is, however, quite a bit of violence—knifings, shootings and nuclear bombs, to name just a few—and parents will need to judge whether this would be frightening or exhilarating for their own children.

With the book market for pre-teens flooded with “relationship” books, including many offerings that normalize same-sex relationships among teenagers, finding a book that is primarily plot-driven can be a real relief for parents struggling to find suitable literature.

As an aside, I wish there were some more “showing” and a little less “telling” in this very imaginative book. We could stand to learn more about Danny from his actions rather than by descriptive narrative. Still, Pickle Boy is a fun and exciting read and the cliffhanger will certainly leave kids clamoring for more.

Yael Zoldan is a freelance writer and author of Jewish children’s books. 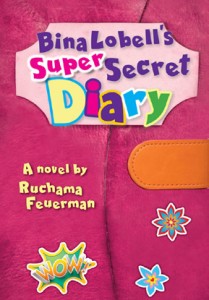 Bina Lobell’s Super Secret Diary is a charming book, written by well-known author Ruchama Feuerman, from the perspective of a nine-year-old girl, Bina Lobell. The diary format gives readers a firsthand look into the thoughts and feeling of this inquisitive and insightful young girl. Furthermore, the creative book design—complete with a magnetic closure to resemble a diary, lined pages, purple text and occasional drawings—will delight young readers.

Although written from a child’s perspective, with juvenile grammar and language (Montessori is spelled as “Monty Sorry”), the reader is exposed to the very real everyday situations and challenges that children commonly face, including a dysfunctional friendship, sibling rivalry, social insecurities and food allergies. Children will relate to Bina’s efforts to understand what Hashem wants of her, and to her guilt when she slips in losing her temper. Her amusing observations of her classmates, her teacher’s wardrobe and bumpy ponytails will elicit smiles.

The main plot of the story, which is unfortunately all too familiar for many, revolves around Bina’s friendships, or lack thereof. As a student in a Montessori school of only five children, she feels limited in her social options. Her best friend takes advantage of her, and as an observer to Bina’s story, we can see how she is being bullied. One can’t help but empathize with her as she contemplates starting a friend gemach and pours out her heart to Hashem to give her a friend.

As a mother of children with food allergies, I appreciated the way Feuerman weaved in Bina’s peanut allergy and anaphylactic reaction, raising awareness of allergies while not being preachy. Bina’s feelings of insecurity and thoughts about dealing with her allergy will help children understand what their classmates with food allergies may be experiencing.

We Jewish mothers are constantly seeking quality reading material for our children that will expose them to new experiences, but not compromise our values. Bina Lobell’s Super Secret Diary is a kosher novel with Orthodox values. As a thoughtful gesture, there is a glossary of Hebrew words used in the book for those who may be unfamiliar with some of the terms. While the writing is deliberately juvenile, and I would recommend this book for the eight to ten-year-old age group, my twelve-year-old daughter thoroughly enjoyed it and reported it to be a popular book in her sixth grade class. We hope to see more children’s and tween books by this author!

Leah Milstein is a project manager for a software company who enjoys reading and writing. Leah lives in Brooklyn and is a mother of six children, most of whom love books.