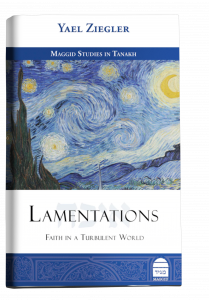 The avid Tanach student who wishes to peruse and plumb Megillat Eichah—the Book of Lamentations—is presented with a relatively uncommon set of challenges. Eichah is a book of poetry. But having a handle on the nuances of Biblical poetry does not guarantee immediate recognition of—and appreciation for—the exquisite and intricate language and style of this collection of kinot. The unusual meter, frequent and sometimes unannounced shifts from speaker to speaker, and the rich lexicon, it may be argued, place the book as second only to Job (Iyov) in its inscrutability. Compounding the challenge for both student and teacher are two interconnected considerations.

The proximate topic of Eichah is a series of traumatic waves of loss, made up of siege, famine, conquest and exile. All of these are distant from our consciousness and current reality, thank G-d. Eichah shares this organic distance from contemporary readers with many other books of Tanach. The added feature that raises the challenge is the fact that the public reading of Eichah takes place on Tishah B’Av. People don’t generally relish preparing for this sad period, and, in contrast to the rabbinic admonition to begin studying the laws of a holiday in advance, we often leave such study for the last minute or relegate it to intricate halachic discussions about the nature of laundry in our day, the potential permission for swimming instruction and the like. When that day finally arrives and we are faced with a limited available curriculum, of which Eichah is a prominent standout, we are too tired and hungry to be able to properly focus on the text as is warranted. As such, most people’s conversance with Eichah is occasional and passing and their familiarity is with famous passages such as shifchi kamayim libeich, al eileh ani bochiah and, most famously, Hashiveinu Hashem eilecha venashuvah chadeish yameinu k’kedem. Eichah is not generally taught in schools, even those that offer a course in Megillot (which often focuses on Esther and Ruth). For many (even avid) Tanach students, Eichah has remained a rolled-up megillah, to be dusted off and taken out once a year with the fervent hope that this will be the last year it will be read in that evocative chant.

Dr. Yael Ziegler, a master teacher and popular speaker, has, with this weighty tome, changed that. Already having achieved critical acclaim with her Maggid Studies in Tanakh commentary on Ruth (2015), Ziegler has taken this challenging text and made it more accessible while at the same time heightening the difficulties, both textual as well as experiential, presented to us in Megillat Eichah.

The author of commentary on any book of Tanach is confronted by a dyad of scope and focus—there is a seemingly infinite range of disciplines awaiting the student, and the writer must choose a point of focus. The treasures vary, from the cartography and military strategy of Yehoshua to the philosophy of theodicy of Iyov and the apocalyptic imagery of Daniel. Each book has its unique niche in exegetical history, and Eichah is no exception. A writer could present Eichah from the vantage point of archaeology or statecraft; the religious broodings of the kinot; or the midrashic literature, using this First Commonwealth elegy to inspire and inform the destruction of the Second Commonwealth, centuries later. Ziegler tries to do most of this, but wisely maintains a focal point, one which easily resonates with her readership. While giving a nod to the Midrash (in a final brief chapter) and providing the necessary historical background, she maintains a clear focus on the literary presentation and the pursuant emotional impact on the elegiast’s audience.

After a brief introduction to the megillah, Ziegler presents the text of each chapter, verse by verse, with a user-friendly translation, followed by insightful literary observations and numerous comments from both modern as well as traditional exegetes. She utilizes literary theory and structure to breathe life into the text and to extrapolate additional, even hidden, meanings of the verses, then fine-tunes the vitality of the text, making its emotional voice ever sweeter and sadder.

Each perek (Biblical chapter) of Eichah is treated in its own book chapter, followed by one or two brief excurses on points highlighted in the commentary. To give a brief taste of Ziegler’s work, I’ll share one comment from each of the perakim of the megillah; for clarity, I will refer to the chapters of the megillah as perakim (singular perek) as distinct from “chapters,” referring to the chapters of the book.

In the chapter detailing the first perek, Ziegler addresses the ambiguous phrasing of verse 10: “. . . and she saw nations enter her Temple, about which You commanded [members] of your congregation may not enter.” She notes the exegetical difficulty in identifying who was commanded not to enter the Temple. She first surveys the standard interpretations (that it references foreigners who were excluded from marrying into the Jewish nation, e.g. Ammonites and Moabites), but points out that there is nothing in the text to recommend that the referents are foreigners. Ziegler then offers her own innovative and insightful interpretation, indicated by her translation above:

While the rabbinic interpretation focuses on the identity of the nations who entered the Sanctuary, the translation that I propose above focuses on the very act of entering the Sanctuary. The holiness of the Temple disqualifies even members of G-d’s holy congregation from entering (p. 116).

The second perek, which she titles “Destruction and Anger” (the author dubs each of the five perakim with a unique and dramatic title—the first is “A Desolate City”), includes a line filled with pathos: “. . . and He made the rampart and the wall mourn, together they were miserable” (2:8). She amplifies the metaphoric personification of Jerusalem and notes the imposition of mourning on the walls, indicating their failure to function properly and defend the city. She then notes how this passage references Psalm 122, a psalm that praises the city:

The author’s keen intertextual eye catches and notes for us how the elegiast pulls a popular praise for the city and turns it inside out to heighten the sense of loss and dispersion brought on by the destruction.

For many (even avid) Tanach students, Eichah has remained a rolled-up megillah, to be dusted off and taken out once a year with the fervent hope that this will be the last year it will be read.

The autobiographical third perek (“The Suffering of the Individual”) follows the abecedarian acrostic model of the first two. Yet it veers from the single, long (and imbalanced) verse form of the first two chapters and instead presents three single-stich verses for each letter. Ziegler quickly observes the form but then turns our attention to the broader structure of the perek.

In parsing the three ayin verses, she observes that the first and third begin with “einai—my eyes,” the eyes of the suffering author; the middle verse focuses on G-d’s sight. As she puts it: “In a bid to enlist G-d to look at him, the gever (the anonymous author of this elegy, presumed to be Yirmiyahu) encircles G-d with his tears.” Not only are we impressed by the observation, we are subsequently moved by the emotional charm of the sufferer’s strategy. Ziegler goes on to liken this move to that of Choni (Ta’anit 3:7) who drew his famous circle and “forced” G-d’s hand, as it were, to respond favorably to his prayer for rain (p. 316).

The fourth perek, which is titled “A Chapter of Numb Pain” and which continues where the second perek left off, is terser than the first two, and its descriptions of the ravages of the siege of Jerusalem are far more explicit and horrific than those of the previous perakim.

Verse 16 has several linguistic twists: “The L-rd’s face scattered them, He did not continue to look at them; the faces of priests, they did not lift up, and to the elders, they did not show favor.”

After noting that “G-d’s face” may mean “Divine attention,” which is often followed by severe punishment (G-d therefore spares the people after the sin of the Golden Calf by not making His presence manifest among them), Ziegler then notes the “intriguing references to the elusive priestly blessing [which] crop up in our verse. In a linguistic reversal of the final sentence of the priestly blessing (“The L-rd shall lift up His face”), the verse declares that no one ‘lifts up’ the priests’ faces. Instead of G-d conferring favor upon His nation, the verse maintains that no one shows favor to the elders” (p. 396).

It is this sensitive ear to linguistic associations, connections and reversals that helps the author bring the spirit and sense of historical interconnectedness throughout Eichah to life.

The final perek of Eichah is itself something of a mystery. It maintains the 22-verse model, but abandons the acrostic (or so it seems); in addition, the verses, which are significantly shorter than the previous chapter, also reflect a later reality, a generation or two after the destruction. The author aptly titles the chapter “A Communal Petition and Lament” and notes that after all of the terror and anger at the siege, the defilement of the city and the loss of its splendor, the final chapter, with the perspective of distance, identifies the truest and deepest cause of the pain: “For this our hearts were miserable, over these our eyes darkened. Over the destruction of Mount Zion, foxes prowl on it” (5:17-18). It is, above all, the destruction of the Temple Mount and the Mikdash that was at the root of the pain and that ultimately became the focal point of our perennial mourning. Ziegler leaves us with the same hope implicit in this refocusing:

These events, though grievous, do not come without warning. The covenant of Leviticus 26 explicitly lays out punishments should the people violate G-d’s statutes . . . The destruction of Jerusalem and her Temple occurs for a reason, as part of an ongoing relationship with G-d. Had the community kept to its commitments, the calamity could have been avoided. This perspective allows for a solution— after ascertaining the behavior that led to the catastrophe, the nation can repair its conduct and begin the process of reconstruction (p. 457).

This is but a brief glimpse at a wonderful book that should refocus our appreciation for Megillat Eichah, challenge us to study it in depth in advance of Tishah B’Av and enable us to experience more fully the emotional impact that the original elegiast, Yirmiyahu, intended to convey through these five powerful perakim.

Rav Yitzchak Etshalom is rosh beit midrash at Shalhevet High School and chair of the Bible Department at YULA High School for Boys in Los Angeles.

0 0 votes
Article Rating
This article was featured in the Summer 2022 issue of Jewish Action.