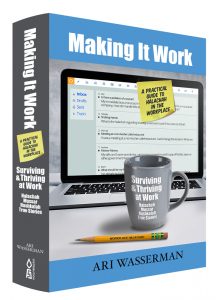 When I saw the cover of Making It Work: A Practical Guide to Halacha in the Workplace, I admit feeling pessimistic. The cover highlights three questions the book addresses:

– What is the halachah regarding shaking a woman’s hand if she extends it first?
– I have a meeting at a non-kosher restaurant and can’t change the location . . .
– Can ma’aser money be used to pay off debts, taxes or other government fees?

I groaned. One Even HaEzer (Jewish law on marriage, divorce and intimacy) question and two Yoreh Deah (diversified area of Jewish law) questions. What about questions pertaining to Choshen Mishpat (laws about finance, torts, legal procedure and loans and interest), which presumably should be the main topic in such a book? Even more importantly, what about the values that should compel an eved Hashem to go beyond the letter of the law in the context of the workplace?

Despite my reservations, however, the book does not disappoint. Indeed, the first inkling that we are in for a gratifying experience is to be found in a glowing approbation by Rabbi Shmuel Kamenetsky, shlita:

In particular, I enjoyed what you wrote concerning honesty in business and dina d’malchusa dina. Chazal’s words in Shabbos (31a) are well known: the first question one is asked on the Yom HaDin is, “Did you deal honestly in business?”

Rabbi Ari Wasserman—a respected attorney specializing in corporate contracts and mergers—peppers his book with interesting anecdotes. Rabbi Wasserman, who is also the author of the five-volume Hegyonei Haparashah, a collection of essays on topics in halachah based on the weekly parashah, begins the first chapter with a story, and concludes with a synopsis that encapsulates one of the fundamental themes of the book: the critical importance of making a kiddush Hashem.

When we venture out into the world, we do so with a built-in identity as religious Jews. Our behavior will always be subject to an extra degree of scrutiny, and will reflect on all Jews . . . We will either be respected specifically as observant Jews (a kiddush Hashem), or disliked, also specifically as observant Jews (a chillul Hashem, G-d forbid). “Neutral” will not be one of the choices. These are high stakes, requiring an ongoing, conscious effort on our part to make a kiddush Hashem.

A wonderful contribution is the section on “Staying Connected: Davening and Learning.” As Making It Work is a work of both halacha and hashkafa, it is appropriate that chapters such as “Making Time to Learn” and “Maintaining Motivation to Learn” impart both inspiration and practical advice. The book states:

It is no wonder that Daf Yomi has been so successful in inducing so many of us to actually spend an hour or two every day learning gemara. Daf Yomi’s attraction is that it is based on definitive, concrete milestones that lead to a definitive, concrete objective—to finish Shas. To get to that goal, one must obviously finish the masechta, and to finish each masechta, one must obviously do whatever it takes to get through today’s daf.1

Our schools and yeshivot excel at teaching halachah and hashkafah—but they do not necessarily impart the concept of “values” to their students—values such as authenticity, balance, fairness, justice, kindness, peace and trustworthiness. . .

While there are many such laudable and impressive chapters in this book, unfortunately, the book does not address a certain segment of the Orthodox Jewish population: working women. With so many observant women currently in the workplace, it is a pity that they are clearly, at best, a secondary target audience. Yet observant women certainly could use some chizuk and concrete suggestions for maintaining yirat Shamayim while navigating the business world. Some women are not aware of certain basic halachot that can be spiritually beneficial as well. I recall mentioning at a conference for professional women a few years ago that women are halachically obligated to daven Minchah. Many of the women present—some of whom attended the finest Jewish high schools and seminaries—were shocked to hear that this is the halachic “baseline.” Now, there are various heterim (leniencies) upon which many women rely to not daven Minchah. But, as I explained at the conference, davening Minchah is a great source of chizuk in the middle of one’s workday. Rabbi Wasserman (Making It Work, pp. 179-180) even relates a story about how his wife was hardpressed to daven daily Minchah while on a work-related excursion. Yet nowhere does he clarify whether or not a woman must daven Minchah altogether! I hope that in a future edition the author will choose to focus on the avodat Hashem of working women as well as men.

One of the work’s few flaws is that the author cites posekim and ba’alei machashavah who may be regarded as questionable morei derech for the book’s target audience. An example of a questionable stringency that Rabbi Wasserman cites is a ruling by Rabbi Menashe Klein, zt”l, based on an aggadah in the Tanna d’Bei Eliyahu (Chap. 8), that severely limits eating with gentiles in ways the vast majority of posekim permit. Obviously such a ruling has far-reaching implications for social gatherings at work and work-related conferences. In such areas, Rabbi Klein is not a “mainstream” authority for most of Making It Work’s readers.2

But these are relatively minor shortcomings in this work. One of the most important themes addressed in the book is the major challenge facing the average yeshivah alumnus who enters the workplace. A chavruta of mine—who is also a successful entrepreneur—expressed this challenge as follows: Someone who has learned in yeshivot for many years may enter the world of business and commerce and unfortunately become a naval b’reshut haTorah—“a coarse and base person with the Torah’s permission.” This concept is elucidated in a famous Ramban at the beginning of Parashat Kedoshim, where he gives various examples of one who fits this description. In our context, a naval b’reshut haTorah is one who deploys halachah and hashkafah in ways that rationalize dishonesty, poor treatment of colleagues and employees, and cutting corners—while ostensibly upholding the letter of Jewish law.

As my chavruta put it, our schools and yeshivot excel at teaching halachah and hashkafah—but they do not necessarily impart the concept of “values” to their students.3 A ben or bat Torah in the workplace is well served by considering his or her values—and making them lodestars of his or her work lives. Values such as authenticity, balance, fairness, justice, kindness, peace, service, trustworthiness and wisdom are all compatible with—and often demanded by—ratzon Hashem and the Torah. But we are not trained to think in terms of such values.4

With so many observant women currently in the workplace, it is a pity that they are clearly, at best, a secondary target audience.

The failure to think in terms of values has far-reaching implications. Several years ago, I wanted to publish a piece on racism in the Orthodox community in a certain Orthodox Jewish publication. A member of the publication’s editorial board vetoed the idea. He explained that he himself categorically rejects and abhors any form of racism in our community. However, he does not believe that these attitudes can be eradicated by writing about them. He therefore preferred not to “wash our dirty linen in public” by raising the issue altogether. He went on to say that for this reason he also discourages the publication of articles on honesty in matters of Choshen Mishpat. He reiterated that he categorically rejects manifestations of dishonesty and impropriety in our community. But, he continued, while any such conduct is utterly wrong, he understands its antecedents in the unjust financial policies imposed on the Jews by non-Jewish governments and institutions in pre-war Europe. Therefore, he opined, it is almost impossible to eradicate such failings, and in this area too, it is better to not wash our dirty linen in public.

Over and over again, Making It Work stresses the most fundamental value of all: kiddush Hashem (and the avoidance of chillul Hashem). Essentially, the entire book—including chapters on shaking hands with members of the opposite gender, commuting by public transportation, personal use of office supplies, taxes and dina d’malchuta dina (twenty-four chapters in all)—is an elucidation and elaboration of that value. Which is why it is so gratifying to find in the very first chapter of the book (pp. 29-30) the passage from the Talmud Yerushalmi (Bava Metzia 2:5) that may be the most important gemara in the entirety of the two Talmuds. In Rabbi Wasserman’s paraphrasing:

The Tanna Rabbi Shimon ben Shetach dealt in flax. Seeking to ease his workload, his students purchased a donkey for him from a non-Jew. When the donkey was delivered, Rabbi Shimon ben Shetach discovered a very valuable pearl attached to its ear. The proceeds of its sale would have allowed him to give up the flax business altogether. From a halachic standpoint, he was not obligated to return the pearl to the donkey’s former owner, but he chose to give it back for one reason: the potential for a kiddush Hashem. The non-Jew gratefully accepted the pearl, saying, “Blessed is the God of the Jews!” Rabbi Shimon ben Shetach’s exceptional honesty was credited not only to himself, but, above all, to the “God of the Jews.”5

As Rabbi Kamenetsky concludes his haskamah: “With this essential work, Rabbi Wasserman . . . will have the zechus of being among those who bring merit to the community, whose righteousness endures forever.”

Notes
1. Making It Work, p. 137. I asked a close friend, Mr. Berger, what he is currently learning, and he told me that he is now systematically pursuing the completion of Shas Mishnayot, with numerous reviews built into the system. This is an alternative system that facilitates regular and substantive learning (see a moving story about such a system in Making It Work, pp. 136-137).
2. Rabbi Klein’s interpretation of the Tanna d’Bei Eliyahu is questionable in and of itself, as the case in point was of King Chizkiyahu hosting non-Jews at his table. There are many distinctions that can be made between the circumstances in that case and scenarios that may be faced in today’s business world.
3. A relatively short list of fifty sample values can be found at http://jamesclear.com/core-values. A more extensive list of 400 values is at http://www.stevepavlina.com/blog/2004/11/list-of-values/.
4. A good summary of the core Jewish values is given by the prophet Michah (6:8): “Asot mishpat, ahavat chesed, v’hatznei’a lechet im Elokecha—do justice, love mercy, and walk humbly with your God.”
5. This is not a precise translation of the Yerushalmi, but captures the gist. I think it is worthwhile to provide here a more exact translation: Rabbi Shimon ben Shetach dealt in linen. His students said to him: “Rebbe, desist from this trade. We will buy you a donkey [to make an easier living as a donkey driver] and you will not have to toil so much.” They went and purchased a donkey from a bandit. The students subsequently found a precious stone dangling from it. They went back to Rabbi Shimon ben Shetach and said to him: “From now on you need not exert yourself.” He asked: “How so?” The students responded: “We purchased a donkey for you from a bandit and a precious stone was dangling from it.” Rabbi Shimon ben Shetach asked: “Did the donkey’s seller know that the stone was there?” They answered: “No.” He then said to them: “Go return it.” The students remonstrated with Rabbi Shimon ben Shetach: “Although theft from an idolater is prohibited, is one not permitted to keep an object that an idolater has lost?” He responded: “What do you think, that Shimon ben Shetach is a barbarian? More than all the wealth of the world, Shimon ben Shetach desires to hear [the non-Jew say]: “Berich Eloko d’Yehudo’ei” (“Blessed is the God of the Jews”).

Rabbi Gavriel Bechhofer, a frequent contributor to Jewish Action, serves as a dayan on the Beth Din of America in Choshen Mishpat cases.