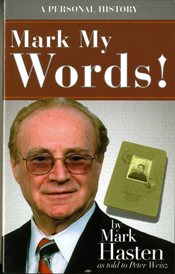 I was skeptical when I picked up the autobiography of Mark Hasten, Mark My Words! I had never heard of Hasten—proof, once again, that humility is alive and well. A person can achieve great things without making a big deal out of himself.

Not only was my initial skepticism about Hasten wrong, it was repeatedly wrong, for when I began the book I thought I had an easy handle on him. I thought I had encountered a survivor of World War II, and would read another book in what is by now a well-known and somewhat predictable genre: the Holocaust memoir.

It is certainly true that each survivor’s story is unique, and I never cease to be amazed by the fortitude, suffering and singular miracles manifest in each survivor’s tale. But, taken together, Holocaust memoirs project certain familiar guideposts. The beginning of Hasten’s memoir sets off in that direction and my skepticism said: OK, I’ll take one more World War II memoir for what it is.

How wrong I was.

Virtually each chapter in this book is a radical surprise. I mean, who would have jumped from an escape from the evil powers of World War II to the invention of Pringles? Or, going back even earlier, who would have jumped from World War II to the sinking of the Altalena? Or from a successful career in nursing homes to the abandonment thereof for a career in banking? On another level, who would have expected a jump from a struggling young couple too distracted by the exigencies of putting bread on the table to notice Yom Kippur to building Jewish day schools?

However you slice the life of Mark Hasten, it has touched all the major events of Jewish history in the last seventy years: Holocaust, Israel, fabulous economic growth, religious resurgence. It has touched a wide range of notable figures, from Menachem Begin to the Tosher Rebbe of Montreal to the governor of Indiana.

And these distinctions are not even what make the book great. That kudo is to be attributed to Hasten’s sober, dispassionate, lucid and utterly frank telling of his story and of the stories of the historic actors he has interfaced with. His objectivity spares no one, yet is kind. He has the ability to get inside a topic and see it from the protagonist’s perspective, and simultaneously to evaluate what he sees without blinking. He writes this way not only about others and events, but also about himself and those closest to him.

For example, we get a thorough analysis of the most controversial act at the time of Israel’s independence: the sinking of the Altalena. This was a ship that set sail from France to Palestine, laden with hard-to-gather weapons for the burgeoning Israeli battle with the Arabs for survival. The long and short of the story is that the ship (which arrived shortly after the State of Israel was declared) was sunk by agents of the new Israeli government, under orders from Ben-Gurion, carried out by Yitzhak Rabin.

The government apologists say the ship had to be sunk because it was commandeered by the forces of Menachem Begin, who was trying to sabotage the emergent Israeli government by insisting on an armed force of his own. The Irgun apologists say they had had no such intention, and that Ben-Gurion was insanely paranoid, to the point of endangering the new Israeli State by risking a civil war with Jews who merely wanted to offer weapons to soldiers (albeit ex-Irguniks) in the new Israeli army.

However you slice the life of Mark Hasten, it has touched all the major events of Jewish history in the last seventy years: Holocaust, Israel, fabulous economic growth, religious resurgence.

Hasten’s view tends closer to the latter, but he specifically disavows any special authority on the question by virtue of his having been on the Altalena himself. For years afterwards he researched the event. He spoke to the participants. Here is the conclusion that his rational, judicial temperament reached: Technical failures in communication between the vessel’s captain and Ben-Gurion’s people on the Tel Aviv shore signaled a major misreading by each party of the intentions of the other.

That rational temperament of Hasten—plus his incredibly dogged determination—led him to great creativity and many patents. Having left Israel, turned off by what he calls its socialist bent, he practically forced his way into an American university program in mechanical engineering, not even knowing English—not to mention not being able to afford the tuition.

Chapters in his book detail, in a very clear and accessible way, how he put his education to work in inventing the snack foods Bugles and Pringles.

Hasten moved on to nursing homes, a field he subsequently abandoned because he took his job seriously enough to be on call twenty-four hours a day, once even hiring a helicopter to rescue his residents during a storm that left them without electrical power. (On another occasion, he posed incognito as a dishwasher to pinpoint and eliminate operational inefficiencies in his nursing homes.)

He next moved into banking. Somehow, at each step of the way, he advanced his Jewish knowledge and commitment, aided by his wife, Ruth Anna, his children and the energetic Rabbi Ronald Gray, whom the Hastens brought to join them in Indianapolis.

The feeling one gets from this memoir is that Hasten has relished each of these stages, fully able to move to the next part of his life without regrets. One might think that a person who worked so hard to perfect his inventive skills as a mechanical engineer would regret leaving them behind by moving into business. However, Hasten found a way to build upon each of his skill sets as he took on a new challenge.

Indeed, one finishes this memoir stunned by the range of Hasten’s achievements but, even more, by the equanimity, the enthusiasm and the great capacity for objective analysis that generated each of them. Of special note is his objectivity in setting forth the potential problems in working closely with family (in his case, his brother Hart) in business.

Hasten worked locally and nationally, committed to his home city of Indianapolis—both to building a day school there and to serving on gubernatorial commissions to advance standards in his industry—and to Touro College, Herut and other national causes. In 2008, the OU awarded the Hastens its highest honor, the Lifetime Achievement Award.

Proof, once again, that Hitler’s greatest evil was not in denying the right to life, but in robbing the world of who knows how many contributions in countless fields. Mark Hasten is an exemplary model of what a survivor has accomplished. His book, in its enthusiasm and its dispassion, and in its brilliance at filling in context, is a joy to read.

Rabbi Hillel Goldberg, executive editor of the Intermountain Jewish News, is a contributing editor of Jewish Action and the author of the recently published Hallel Hakohen (Jerusalem, 2008), an unraveling of the elliptical commentary of the Vilna Gaon on the laws of mikvah.