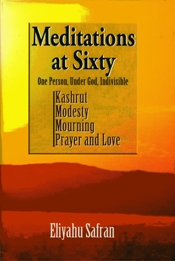 Rabbi Dr. Eliyahu Safran comes from a great tradition of distinguished sages who bequeathed to their posterity, and to all of us, a deeper awareness and appreciation of what it means to be a Jew. His grandfather, Rabbi Bezalel Zev Shafran, wrote She’eilot U’teshuvot RBAZ, which has a respected place in the world of responsa. Pirkei Iyun b’Toldot HaChinuch HaYehudi by his father, Rabbi Dr. Joseph Safran, whom I well remember from having attended some of his courses at Ferkauf Graduate School of Psychology, is a highly valued treatise on Jewish education.

Having reached the halfway mark to 120, Rabbi Safran felt it was time to follow the example of his forebears and leave a meaningful contemplative legacy to his own posterity (not that he has been literarily inactive until now). We are grateful for that even as we express the hope that this is just the beginning of his post-sixty meditations.

Meditations at Sixty is a collection of well-written and thought-out essays—more precisely meditations—on such diverse topics as kashrut, modesty, mourning, prayer, love and honesty and ethics, to name a few. There are many themes that permeate this interesting book. Perhaps the most all encompassing is that “Judaism does not consider the physical and spiritual to be at odds. Rather, they are dual expressions of the same brilliance of Creation, the expressions of a loving Creator [W]ho expects much from us and [W]ho has given us more” (p. xiii).

Rabbi Safran is an integrationist who sees the big picture, and paints that picture with the many colors of his learning and experience. This same point is made again in his meditation on kashrut, where he observes that “to be holy is to engage the physical, not to divorce ourselves from it. Kashrut is a fundamental and regular way of engaging the physical in a way that reminds us of the holy” (p. 26).

There is much to savor in Rabbi Safran’s essay on tzeniut, which is, in essence, a wide-ranging critique of the values that unfortunately reign supreme in our time. He culminates the essay with the profound plea to “Cloak the physical in order to allow the beauty of the soul to blossom. That is the beginning of genuine happiness and meaning” (p. 61).

In an almost uncanny anticipation of the ethical breaches that have exploded recently, he asserts in an essay on honesty and ethics in Jewish law that “The struggle towards honesty and the challenge of overcoming our human tendency for deception is what defines our struggle in this world. We must remember that even the smallest lie, the seemingly harmless falsehood enacted in the secrets places of our heart, is still forbidden” (p. 179).

The final presentation, a discourse on the dreidel, is a semi-mystical reflection on Jewish history in its spinning, dizzying vicissitudes, up to and including the reestablishment of the State of Israel. It is a fitting “top off” to the array of essays, in that Rabbi Safran shows that there is more—much more—to the dreidel than meets the eye, reflecting the deeper meaning of the various subjects he covers with scope and insight.

Rabbi Safran may have written Meditations at Sixty for his children, but he thankfully made it available to the larger community. The book is a cry from the heart, urging us to be holy, backed up by a comprehensive presentation of what being holy means—thereby making holiness not only understandable but also accessible. There are no illusions; the task is formidable, but, like all other challenges in our lives and in our history, it is achievable.

Rabbi Dr. Reuven P. Bulka is the rabbi of Congregation Machzikei Hadas in Ottawa, Canada, and chair of the Trillium Gift of Life Network.