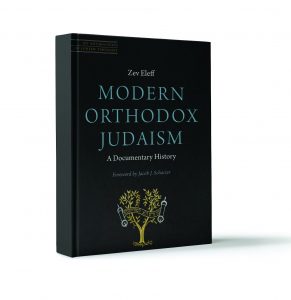 As a rabbi, one of my least favorite questions is: “So Rabbi, how ‘modern’ is he?”

It’s a question I am asked all too often, especially when consulted about a potential shidduch, and it’s a question that causes me to cringe.

Because the word “modern” in this query has nothing to do with a young man’s proficiency with technology, language or even his awareness of the world around him. Rather, the usage of the word “modern” is a reference to the level of a person’s personal halachic observance, and unwittingly creates an adverse reflection on the heart and soul of “Modern Orthodoxy”—its commitment to Torah values and halachic observance.

But what distinguishes “Modern Orthodoxy” from Orthodoxy? Is it a movement or is it merely “the other”—the Orthodoxy that is not open or closed, all-inclusive or all-exclusive?

It is for this reason that Dr. Zev Eleff’s recent contribution to the study of Modern Orthodoxy and its history entitled Modern Orthodox Judaism: A Documentary History is so critical. Not because it provides answers, but rather because it raises questions and creates a context for conversation. Through more than 150 documents covering nearly 200 years of American Jewish history, Dr. Eleff guides the reader through the controversies and the challenges, the issues and the debates that formed the American Jewish community that identifies itself as Modern Orthodox.

The book is divided into three parts, with carefully organized sections and subsections. Each document and section in this history is introduced with a brief essay by Dr. Eleff, in which he provides context and commentary. The documents come from a very wide range of sources, including advertisements, speeches, essays, newspapers, letters and proclamations.

Part I addresses the responses of Orthodoxy in early America to the emergence of a Reform Judaism that rejected the Oral Law, Talmud and Codes. From documents from the 1820s, we learn of the early battles in Charleston, home to the first established Reform community, and the struggles to maintain commitment to halachah. (For further information on this and other early struggles in American Judaism, consult Dr. Eleff’s other recent and outstanding book—the groundbreaking history of early American Judaism, Who Rules the Synagogue? Religious Authority and the Formation of American Judaism [New York, 2016].) This section concludes with the founding of the Jewish Theological Seminary, which was in many ways the Orthodox response to Reform Judaism. As Dr. Eleff notes, this response did not draw clear lines and therefore, kept alive the debate for another generation or two “of what could and could not count for Orthodox Judaism in the United States and opened a pathway for a new movement in American Judaism.”

Part II of Dr. Eleff’s book begins with “The Arrival of Eastern European Immigrants” at end of the nineteenth century and continues into the mid-twentieth century. During those years Orthodoxy in America began to become institutionalized with the founding of the Union of Orthodox Jewish Congregations of America (OU), the Young Israel Movement, Yeshiva College, Hebrew Theological College and Jewish day schools. It is in that era that Orthodoxy parted ways with the Conservative movement, and in two fascinating chapters in this section we find documents addressing two critical issues: “Mixed Seating and ‘Modern Orthodoxy’” and strong positions taken against various people and groups deemed to be outside of Orthodoxy—“Heresy Hunting.” In this latter section there is a translation of the document excommunicating then JTS professor and founder of the Reconstructionist movement, Mordechai Kaplan. However, it would have been interesting to have also included a document related to the attempts to merge JTS and Yeshiva University that were scuttled because of Kaplan’s role at JTS.

Featuring the thoughts and ideas of many of the towering figures who fought for the heart and soul of the nascent Modern Orthodox movement, this final section includes documents by Rabbi Samuel Belkin, Rabbi Oscar Z. Fasman, Rabbi Irving (Yitz) Greenberg, Rabbi Lamm, Rabbi Aharon Lichtenstein, Rabbi Emanuel Rackman and Rabbi Yosef Dov Soloveitchik, to name just a few. These were the people, together with many others, who built on the foundations of the first half of the twentieth century and oversaw the growth of YU, the explosion of kashrut and day schools, and the interface with Religious Zionism and American society.

Unlike the first two parts of this work, it is this third part which continues to be written. To Dr. Eleff’s credit, he includes documents authored as late as 2014 covering topics such as the painful rabbinic scandals that have wounded our community; the question of women’s roles in communal life; the emergence of “Open Orthodoxy” and the challenge that Professor Samuel Heilman has studied in depth of “Sliding to the Right.”

While this section, as was true of the previous two, is well researched and presents documents that need to be considered, it is this final third that leaves me wanting. Perhaps it is my personal penchant for optimism that is at play, but I would have also liked to see documents that celebrate our accomplishments, especially in the concluding pages that focus on the twenty-first century. Perhaps a document on the Rav’s introduction of serious Talmud study for women. What of the transformation of North American aliyah via Nefesh B’Nefesh? Or the 2013 Pew study’s findings regarding the economics of the Modern Orthodox community? What of the expanded role of YU and its Center for the Jewish Future? Or the appearance of Koren Publishers as a competitor to ArtScroll? What of the Modern Orthodox community and American politics—the crucial role of the OU Advocacy Center or even Senator Joseph Lieberman’s run for vice president? And the list of Modern Orthodoxy’s positive growth and achievement in the twenty-first century goes on.

Modern Orthodox Judaism: A Documentary History is an outstanding contribution to the study of our community. I commend Dr. Eleff for producing a work that is accessible, engaging, thought-provoking and a gateway to further investigation and inquiry. But even more, this is a book that brings honor to the word “Modern,” as it demonstrates how the Modern Orthodox community has played a critical role in the spreading of Torah while continuing the sacred struggle to help us become ever greater ovdei Hashem.

Rabbi Leonard Matanky is the rabbi of Congregation KINS of West Rogers Park in Chicago.