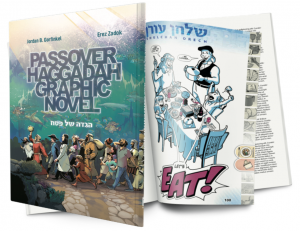 “A Passover Haggadah Graphic Novel?” I hear you ask. “How does that work?”

The answer, I’m happy to report, is “surprisingly well.”

This Haggadah is by no means the first attempt to translate traditional Judaica into the comics format, but previous efforts have been . . . let’s be generous and say “inconsistent.” Readers would largely be in no imminent danger of mistaking them for products from any of the major publishers. The Passover Haggadah Graphic Novel, however, is as professionally rendered as anything you might hope to find on the shelves of your local comic book store.

This may be because of creator Jordan B. Gorfinkel’s background. The cartoonist—also known as “Gorf”—not only innovated the weekly, Jewish-themed comic strip “Everything’s Relative” (JewishCartoon.com), he was a Batman editor at DC Comics and one of the creators of the superhero team Birds of Prey. The Haggadah was published by Koren in cooperation with Gorfinkel’s studio, Avalanche Comics Entertainment.

Artist Erez Zadok also has a background in comics, albeit in Israeli comics. He and Gorf previously collaborated on a comic book project with Butch Hartman, creator of such animated series as Fairly Odd Parents and Danny Phantom.

The final contributor, translator David Olivestone, earned his reputation as editor and translator of the NCSY Bencher, which is the standard by which all others are judged. (If Olivestone’s name is familiar, it should be noted that he is a member of Jewish Action’s editorial committee and a frequent contributor to these pages.) The Rambam writes how slavish adherence to the words of a text will yield a result that is corrupt. Rather, a translator must first understand and appreciate the meaning of a text before choosing appropriate words in another language. With his skill for translation, Olivestone has crafted an English Haggadah that is accessible to newcomers while honoring the nuances of the original text. (Witness, for example, the presence of an “astute child” and a “rebellious child” in lieu of the more traditional “wise son” and “wicked son.”)

The Haggadah is narrated by a family of anthropomorphic goats, which is kind of a bold choice when one considers their role in the korban Pesach. This happy family appears throughout the book to advise readers when to dip, pour, spill or perform other actions associated with the Seder.

Reading these pages can really bring the story to life, which is the ultimate point of reciting Maggid in the first place.

The text appears in three parts: the original text in Hebrew, a transliteration (based on Sephardic pronunciation) in English characters and a modern English translation. The translation, as noted, is particularly engaging, though traditionalists might balk at occasional phrases that may be intended to appeal to current sensitivities, such as the use of the feminine pronoun “her” for two of the aforementioned “four children.” (The original Hebrew is left as it has always been.)

Appealing to twenty-first century sensibilities, however, is a good thing and one that is especially apparent through the artwork. Far too many illustrated children’s or family books ignore the reality that there are plenty of non-white Jews in our communities. Sure, they’re a minority, but they’re not an anomaly and they deserve to be represented. The Seder participants and other characters in this graphic novel include not only Anglo Jews but Jews of many backgrounds, including African-American. I heartily applaud this decision.

The artwork is bold and engaging. It also spans the gamut of Jewish history, from before the Egyptian servitude through the Exodus, and from Talmudic times to the present. (There’s even a fanciful glimpse of a speculative “Messianic era,” though eagle-shaped flying cars, while an utterly awesome idea, may be a bit much to hope for.)

When it comes to the art, the main attraction is indisputably the Maggid section. For this part of the Haggadah, the Hebrew text and translation appear on the right-hand side of each two-page spread, with the corresponding English presented in the graphic novel format on the left-hand page. (This is especially appropriate given that Maggid comprises the “narrative” portion of the Haggadah.) Even for those of us who will perform the Seder in Hebrew, reading these pages can really bring the story to life, which is the ultimate point of reciting Maggid in the first place. 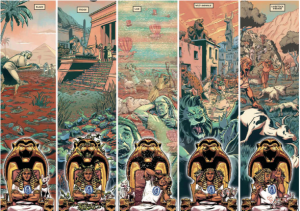 Illustration of the first five of the Ten Plagues

It is also advisable that readers take the time to really soak up the art or they might miss layers of nuance. For example, the art accompanying the section “Al Achat Kamah V’Chamah” (following “Dayeinu”) was clearly inspired by Norman Rockwell’s classic painting “The Gossips,” but it also represents a tour through Jewish history, from the Exodus through the present. Similarly, perusing such sections as the Ten Plagues reveals the creators’ familiarity with the Midrashic interpretations, though they didn’t feel the need to make such things explicit through the text. (Sometimes less is more.) The same is true with “Chad Gadya,” which not only reflects the traditional interpretation for the piyut but provides narrative closure for the framing sequence featuring our family of hircine hosts.

The idea of a Haggadah in graphic novel form may strike some as flippant, but this need not be the case. Talking, humanoid goats may not fit every family’s comfort level for the Seder, but Haggadot throughout history have boasted some pretty far-out illustrations, not the least of which is the famous fourteenth-century “Birds’ Head Haggadah.” It is said that Rabbi Levi Yitzchak of Berditchev would wish people a kosher Purim and a freilichen Pesach because people don’t always remember to keep Purim kosher, or that Pesach is meant to be joyous. Here is a way to make one’s Pesach Seder a little more creative and to bring a smile to participants’ faces—and while the medium is non-traditional, the content is by no means irreverent.

The authors of the Haggadah wrote, “V’chol hamarbeh l’saper b’Yetziat Mitzrayim, harei zeh meshubach—whoever elaborates on the Exodus from Egypt, behold, this is praiseworthy.” Who says that this can only be accomplished verbally? A picture being worth a thousand words, I see no reason why a graphic novel should not be able to stir one’s imagination and get one thinking about many aspects of the Exodus. Similarly, such a project can serve as a springboard for discussion among family members or other Seder guests. On Pesach, what could be more meshubach than that?

Rabbi Jack Abramowitz, MS Ed, is a writer and educator with decades of experience in outreach and informal education. As editor of the OU Torah web site, Rabbi Abramowitz has helped to make the study of Tanach, Mishnah and halachah more accessible to newcomers and seasoned learners alike. Rabbi Abramowitz is the author of The Nach Yomi Companion (volumes 1 and 2), The Shnayim Mikra Companion, The Taryag Companion, The Tzniyus Book and The God Book.