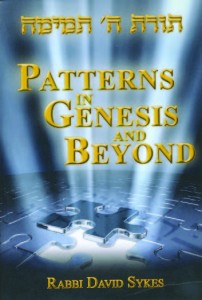 The field of literary analysis of Tanach has been substantially refined over the past four decades. New scholarly insights continue to illuminate the text and its messages. One person’s peshat is another person’s derash, and we can and always will debate the boundaries of what the text does or does not intend to say. The dimensions of peshat, derash, remez and sod come together in Rabbi David Sykes’ stimulating new work on Tanach.

As he states in his prefatory remarks, this book took him over forty years to complete. Much of this work refines and expands upon his doctoral dissertation completed at the Bernard Revel Graduate School of Yeshiva University in 1985, Patterns in Genesis, after which he taught Bible and other Judaic subjects at Yeshiva University.

Back in the 1970s when Rabbi Sykes embarked on this pursuit, the literary revolution was just taking off in the academic world. Several prominent scholars began to consider the Biblical text as a final product to be analyzed for meaning, rather than dissecting the text or speculating as to its origins. This mode of inquiry often dovetailed substantially (but not entirely) with what midrash and classical commentators had been doing for millennia. Consequently, there was more room for productive dialogue between the yeshivah and the academic world than there had been for generations. Orthodox scholars transformed and channeled this method of analysis into a specifically religious framework.1

Rabbi Sykes writes from a traditional perspective. His insights are surrounded by midrashim and our classical commentators, and he conveys a deep sense of reverence for the God-given Biblical text as well as for our great Biblical heroes. Because he does not distinguish between the different layers of interpretation, one might question the validity of many of Rabbi Sykes’ points, since it is often unclear that they are compelling from a peshat standpoint, even if many are plausible.2 Alternatively, one may view his book as an invitation to think about the dazzling spectrum of potential meaning latent in the Torah. This approach requires greater flexibility in drawing lines between peshat and other layers of interpretation. In this review, I will adopt the latter approach and briefly present several aspects of this work, with the hope of offering a small taste of the range of interpretation in Rabbi Sykes’ style and methodology.

Word Patterns
Rabbi Sykes is at his best when the patterns include compelling linguistic support, thereby demonstrating that two or more passages are in dialogue. For example, he traces the usage of tov and ra in Parashat Bereishit. After God’s creations are all tov, the Tree of Knowledge contains both tov and ra. This is the first occurrence of ra in the Torah, suggesting that evil is latent in creation. It is up to people to make the right choices.

Chava was tempted to eat from the Tree of Knowledge, wrongly perceiving its goodness to be like that of God’s creation. The Torah uses the same expression as when God beheld creation: “Vateire haishah ki tov haetz lma’achal” (3:6). Through this sin, Adam and Chava gained sexual awareness, realizing that sexuality could be used for negative purposes as well as for positive. By the end of the parashah, the Bnei Elokim see the Bnot Ha’adam as good and take them, just as Chava had done when she beheld the forbidden fruit: “Vayiru Bnei HaElokim et Bnot Ha’adam ki tovat heinah vayikchu lahem nashim mikol asher bacharu” (6:2). Chava became sexually aware through eating the fruit, and now the Bnei Elokim acted sinfully on that impulse, multiplying evil in the world. Disobedience to God brings curses instead of blessings (1-14).

Rabbi Sykes routinely perceives meaning in the names of people and places. For example, the ark landed on Mount Ararat after the Flood, signifying the undoing of the arur, curses, from the sins of Adam and Cain (33). Similarly, Rabbi Sykes identifies wordplays on Noach’s name throughout the Flood narrative. Following the Flood, the ark rested, vatanach hateivah (8:4); the dove initially found nowhere to land, v’lo matzah hayonah manoach (8:9); and God smelled Noach’s offering, vayarach Hashem et reiach hanichoach (8:21) (36).

Across Tanach
Rabbi Sykes frequently traces patterns in Genesis through later Biblical narratives. For example, he suggests that the narratives about Binyamin foreshadow the reign of King Shaul. Yaakov names his son Bin-Yamin, son of my right hand, symbolizing strength and intimating that his tribe will rise to greatness. However, Rachel names him Ben-Oni, son of my grief and strength, suggesting that this kingship will be tragic and short-lived. Binyamin also was born en route to Bethlehem, implying that Shaul’s kingship will be a stop on the way to Bethlehem, that is, David’s birthplace (254-256).

In an extended study, Rabbi Sykes explores the narratives of Lot and his descendants (145-176). Rabbi Sykes identifies a considerable number of contrasts between Avraham and Lot in the Torah. He also detects a series of parallels between Lot’s rescue from Sodom and the Israelites’ redemption from Egypt during the Exodus. He then explores parallels to the Ruth narrative, suggesting that Elimelech resembles Lot who was overly self-concerned, whereas Boaz reflects Avraham and his exemplary quality of chesed. This study is a fine example of how extensive the patterns might be within the Torah and beyond.

Character Development
Rabbi Sykes also exploits possible parallels to demonstrate how righteous and penitent characters can break out of negative patterns and transform them into blessings. For example, there is a negative dimension in Yaakov’s deceptive behavior toward Yitzchak.3 After Yaakov returned to his homeland and confronted Eisav and wrestled with an angel, he was renamed Yisrael, suggesting straightness (yashar). Rabbi Sykes maintains that there are allusions to Yaakov’s positive transformation in his purchase of land in Shechem. Yaakov bought a parcel of land, chelkat hasadeh (33:19), for 100 kesitah. Rabbi Sykes links this purchase to Yaakov’s deception of Yitzchak, where Yaakov expressed concern that he was smooth-skinned, ish chalak (27:11). The unusual form of currency, kesitah, might be a wordplay on the Aramaic kushtah, truth. Now that Yaakov has resolved the negativity of the deception, he is again “smooth” and is associated with truth (234).

In a different analysis, Rabbi Sykes adopts the reading of Ramban on Genesis 16 and criticizes Avraham and Sarah for their harsh treatment of Hagar (177-193). Ishmael would become a pere adam, a wild ass of a man, understood by Ramban as a barbaric individual whose descendants would persecute the descendants of Avraham and Sarah as punishment for their mistreatment of Hagar. 4 Rabbi Sykes suggests that Yosef’s being brought to Egypt as a slave specifically by Ishmaelites is an aspect of this punishment. Moreover, the angel ordered Hagar to return to her oppression under Sarah, v’hitani (16:9), and Yosef referred to his suffering in the land of his oppression as “b’eretz onyi” (41:52).

To summarize, patterns in the Torah sometimes can be perceived as foreshadowing later events in the Torah and the rest of Tanach. However, patterns throughout Tanach also teach that repentance and righteous behavior can break and transform earlier negative patterns into blessings. This message, demonstrated through Rabbi Sykes’ careful attention to the tiniest details, is an inspiring theme that runs throughout his work.

We have explored but a tiny sample of the wealth of ideas suggested by Rabbi Sykes. His book contains much material to inspire, excite and challenge. Readers can decide what is or is not compelling to them, but all will experience the multifaceted and eternally relevant glory of the Torah by reading this book.

1. See especially Rabbi Shalom Carmy, “A Room with a View, but a Room of Our Own,” in Modern Scholarship in the Study of Torah: Contributions and Limitations, ed. Shalom Carmy (Northvale, New Jersey, 1996), 1-38; Rabbi Aharon Lichtenstein, “Criticism and Kitvei ha-Kodesh,” in Rav Shalom Banayikh: Essays Presented to Rabbi Shalom Carmy by Friends and Students in Celebration of Forty Years of Teaching, ed. Hayyim Angel and Yitzchak Blau (Jersey City, New Jersey, 2012), 15-32; Yael Ziegler, “Methodology and Concluding Remarks,” at http://vbm-torah.org/archive/ruth/38ruth.htm.

2. Already concerned with defining scholarly standards of literary analysis in the 1980s, Moshe Garsiel prefaced his study on the Book of Samuel with a substantial chapter on methodology. See Garsiel, The First Book of Samuel: A Literary Study of Comparative Structures, Analogies and Parallels (Ramat Gan, Israel, 1985), 11-57.

4. For further discussion of the evaluation of the behavior of Sarah and Avraham in that episode, see Hayyim Angel, “Sarah’s Treatment of Hagar (Genesis 16): Morals, Messages, and Mesopotamia,” Jewish Bible Quarterly 41 (2013): 211-218, reprinted in Angel, Peshat Isn’t So Simple: Essays on Developing a Religious Methodology to Bible Study (New York, 2014), 213-222.

Rabbi Hayyim Angel is the national scholar of the Institute for Jewish Ideas and Ideals (jewishideas.org). He teaches advanced Tanach courses to undergraduates and rabbinical students at Yeshiva University, and lectures widely.