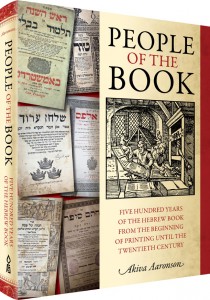 The Internet is only the latest, and probably not the last, of many information upheavals due to technology. An important change began over 500 years ago with the invention of the printing press. This new method for mass-producing books quickly altered the political and religious face of Europe. Jews, traditionally devoted to literacy and study, were early adopters of printing technology and suffered less upheaval than their Christian counterparts.

In a fascinating and richly illustrated new book, People of the Book: Five Hundreds Years of the Hebrew Book From the Beginning of Printing Until the Twentieth Century, Akiva Aaronson traces important Jewish developments along the path, from Rashi’s Torah commentary, the first dated Hebrew book (Italy, 1475), through the Survivors’ Talmud published in 1948.

In the mid-1400s, Johannes Gutenberg invented the mass production of books through the printing press. Metal letters—movable type—were assembled onto a page. Ink made from vegetable oil rather than water, which does not stick to metal, was applied to the typeset page. Paper, which had been recently invented, was placed into a press in which the typeset page covered with ink was pushed onto the paper. With this combination of inventions, the new technology of the printing press could produce books in large volume. While some lamented the loss of the art of handwritten books, their apprehension could not stop the spread of inexpensive, mass-produced books. In explaining all this and more, Aaronson includes delightful and enlightening illustrations of early printing presses and books.

Printing was developed in Germany, but Jews were excluded from the industry by the local guilds. However, when the technology made its way to Italy, Spain and Portugal, Hebrew printing exploded. The first fifty years of printing, from 1450 to 1500, are called the period of incunabula. During that time period, there were twenty-nine active Hebrew printing shops, nearly one-fifth of all known printers at the time. With a literate and learned population, the Jewish community enjoyed a high demand for affordable books.

Each printer had to carve out his own letters—what we call fonts today—but regional characteristics can be easily seen. Ashkenazic printers used more square letters and Sephardic printers used rounder letters, each following the practice of scribes. Hebrew vowels proved a unique challenge; additional metal type had to be included for each vowel. Numbering of pages appeared in the early 1500s—the first Hebrew book with page numbers was the 1509 Constantinople edition of Rambam’s Mishneh Torah.

The house of Soncino was one of the earliest and most important Hebrew printers, and its name still resonates today, over 500 years later. The first Hebrew book published by a member of the Soncino family was the Babylonian Talmud, Tractate Berachot, in 1483, likely the first printed volume of the Talmud. While the volume lacked page numbers, it contained Rashi’s commentary on the inner column of the page and Tosafot on the outer column. This format remains to this day.

Title page of Masechet Bechorot, published by the Agudath HaRabanim in the American Zone in Germany with the help of the US Army and the American Jewish Joint Distribution Committee, in 1948. Known as the “US Army Talmud” or the “Survivors Talmud.” Courtesy of Yeshiva University, Mendel Gottesman Library

In the short time between the invention of the printing press and the Jewish expulsion from Spain in 1492, Hebrew printers in Spain published many books, including the first printed Haggadah and both Rashi’s and Ramban’s Torah commentaries. In approximately 1491, Rabbi Yaakov Baruch ben Yehudah Landau’s Sefer HaAgur was published in Naples. This was the first Hebrew book published in its author’s lifetime.

In the first half of the 1500s, printing ended its pioneer phase and became an established industry. Trade developed, texts became standardized and printing flourished. In 1516, Soncinoís greatest competitor began publishing in Venice. Daniel Bomberg, a wealthy Christian, used the most accurate texts and the finest materials to print what quickly became the standard edition of basic Jewish texts. He published the first Tanach, the Hebrew Bible, with chapters and verses (and with the books of Shmuel and Divrei HaYamim each divided in two).

With the exception of prayerbooks, the Pesach Haggadah is the most published Jewish book, with about 5,000 editions having appeared since printing was invented.

His Mikra’ot Gedolot, the Rabbinic Bible, is still the basis for what is used today. And between 1520 and 1523, Bomberg published the first mass-produced, complete set of the Babylonian Talmud, which introduced pagination that continues to this day.

Aaronson continues telling the stories of great books and printers throughout the centuries. Sulzbach, Roedelheim and Vilna are only some of the important places where publishers made Jewish history. In the early 1700s, stereotyping was developed, in which plates were made of complete pages. This not only reduced the cost of printing, but also allowed for easier reprinting of subsequent editions since the plates could be stored. The Industrial Revolution in the mid-1800s brought with it mechanical iron presses that were faster and easier to use.

With the exception of prayerbooks, the Pesach Haggadah is the most published Jewish book, with about 5,000 editions having appeared since printing was invented. The earliest known printed Haggadah is from Spain, printed around 1482, with no vowels, commentary or illustrations. The first printed Haggadah with commentary was Rabbi Yitzchak Abarbanel’s Zevach Pesach, published in Constantinople in 1505, not long after the author’s death. The Prague Haggadah of 1526 was the first Haggadah printed in Northern or Eastern Europe. It includes vowels and more than sixty illustrations.

Aaronson tells the story of the sefer with enthusiasm and color. He discusses censorship, halachic controversies and more. His story takes us into the twentieth century with Feldheim and Shulsinger Brothers in New York and the Soncino Press of London, concluding his historical survey with the publications immediately after the Holocaust. Technology has since grown in leaps and bounds. Digital printing has become fairly common and Internet storage of books, including publication directly online, is growing. The history of the sefer continues.