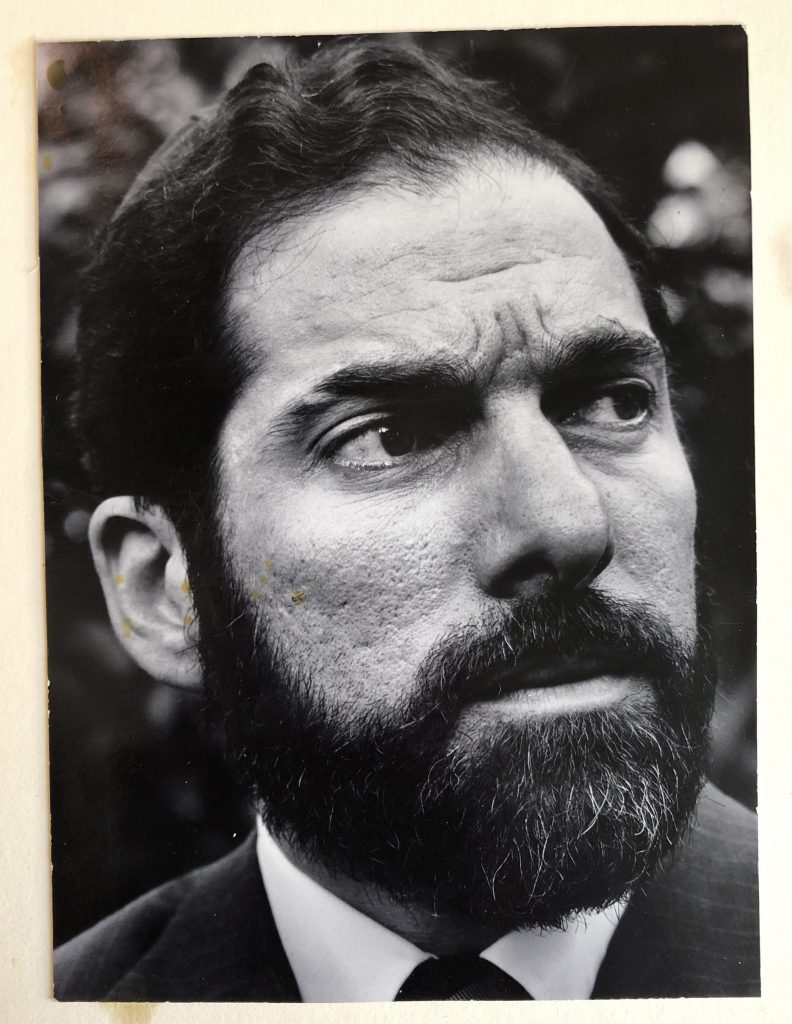 When the book Torah of the Mind, Torah of the Heart, by Rabbi Dr. Yitzhak Asher (Isadore) Twersky, zt”l, arrived in the mail, I tore open the package and, in my excitement, began to read voraciously. It is a collection of mostly brief divrei Torah on the weekly Torah readings for Sefer Bereishit and Shemot, and I devoured several pages before I realized that I had made a mistake. The Torah of Rav Twersky cannot be gulped down. It must be imbibed slowly. I started over again, reading one piece at a time, then thinking carefully about each one.

Rav Twersky was a complex and multifaceted individual. He was an heir of the great Chassidic dynasty of Chernobyl, serving as the Talner Rebbe of Boston until his death in 1997. At the same time, he was a Brisker lamdan, a worthy son-in-law of the renowned Rabbi Joseph B. Soloveitchik, zt”l. He was also an accomplished academic scholar, who held the Nathan Littauer Chair in Hebrew Literature and Jewish Philosophy at Harvard University. But the reason I was so excited to read this volume was personal. Rav Twersky was one of the first rabbinic figures of my youth, and his image and memory continue to influence my religious consciousness and spiritual life.

I feel similarly about the editor of this volume, Rabbi David Shapiro, who, in addition to being my high school principal and mentor, remains a dear friend and role model. Rabbi Shapiro is a devoted and thoughtful disciple and colleague of the Talner Rebbe, and this book is obviously a labor of love. Rabbi Shapiro’s intelligent and careful work has resulted in one particularly striking feature of this sefer, namely, that anyone who knew the Talner Rebbe and heard him speak will hear his voice and the cadence of his speech coming through the printed words of this volume. However, even for those who never met Rav Twersky, this sefer offers beautiful insights and fascinating interpretations, and more importantly, in the words of the Twersky family’s introduction to this volume, “reflects, and, to a significant degree, articulates a vision of an integrated religious life.” Indeed, it reflects the varied but integrated nature of the Rebbe himself.

Rav Twersky was one of the first rabbinic figures of my youth, and his image and memory continue to influence my religious consciousness and spiritual life.

While each Torah thought in this volume is meaningful and relevant to the parashah with which it deals, there are certain themes that one can trace throughout the sefer. The centrality of theology to the conduct and character of a Jew; the idea of sanctity; religious sensitivity; and the dichotomies of spiritual and mundane, emotion and intellect, belief and action, and insularity versus contributing to the greater society are just some of the themes which are explored over the course of the work. 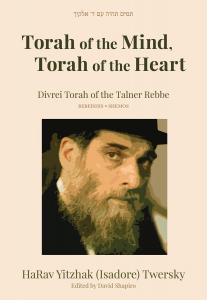 This volume contains three types of divrei Torah. In some pieces, the Rebbe simply highlights an important and often obscure interpretation that sheds light on an issue in the parashah, without extensive comment of his own. A beautiful example is from Parashat Ki Tisa regarding the veil worn by Moshe Rabbeinu to cover the ethereal light that radiated from his face. The Torah (Shemot 34:34) emphasizes that Moshe would only wear the veil when speaking to the Jewish people but would remove it when in God’s presence. To explain the significance of removing the veil before God, Rav Twersky cites a comment of Rabbi Zerachiyah HaLevi from his introduction to the Sefer HaMaor:

The heart of every wise-hearted person is filled with the desire to seek and investigate wisdom in order to understand and discern . . . between truth and falsehood. . . . sometimes this desire intensifies in his heart to the degree that he seems like one who breaches standards of modesty and ethical propriety by removing the veil of self-effacement from his face in order to probe the truth, as it says (Tehillim 119:46): “I speak about Your laws in the presence of royalty, and I am not self-effacing.” There is an allusion to this [concept] in the veil which Moshe removed from his face when he came to speak with his Master.

Those who spent time in yeshivah are familiar with the Ba’al HaMaor and have, on occasion, squinted our eyes to read the small letters of his commentary printed in the back of the Gemara, but few have taken the time to read his poetic introduction and fewer still may have noted the above comment and appreciated its exegetical and moral import. “Lo habayshan lamed—the bashful cannot learn” (Avot 2:6). Moshe Rabbeinu was the most humble man to ever live, but he did not allow his humility to compromise his search for the truth of Torah.

In a second type of presentation, Rav Twersky suggests a novel idea or interpretation, or teaches an important lesson. For example, in his comments to Parashat Yitro, the Rebbe puts forth an original interpretation of the Talmudic passage in Kiddushin 31a, which posits that as the nations of the world received the news of Matan Torah, first hearing only about the commandments to acknowledge God and to reject all other gods, they reacted with cynicism, saying, “He is seeking to promote His own honor.” It was only after hearing the commandment to honor one’s parents that “they conceded to the earlier statements.” Rav Twersky explains that the nations accepted the virtues of honoring one’s parents, not committing murder, et cetera, but believed at first that it is possible to sustain a purely secular morality. However, contends Rav Twersky, they ultimately came to recognize that “the only possible source of such an objective, normative morality is Hakadosh Baruch Hu. Thus, the commandments of kibbud av va’eim, and so on, served as the basis for their acceptance of Anochi and Lo Yihiyeh.” The Rebbe concludes, “Our divinely based Torah values constitute the only compelling response to the atheistic moral relativism of society.”

The Torah of Rav Twersky cannot be gulped down. It must be imbibed slowly.

Finally, in some pieces, Rav Twersky cites disparate ideas or interpretations without making explicit the relationship between them or the lessons that emerge from them. The reader must develop his own understanding of the meanings and implications of the sources. This is in part due to the fact that some of the pieces were reconstructed from incomplete notes, as Rabbi Shapiro acknowledges in the editor’s introduction. However, often the Rebbe is challenging us. One example is his analysis of Yaakov Avinu’s reaction upon awakening from his dream of the ladder in Parashat Vayeitzei. Rashi writes that after experiencing the prophecy, Yaakov became aware that he was in a holy place and was upset that he had chosen to sleep there. First Rav Twersky cites the Brisker Rav, who asks why Yaakov was upset. After all, Yaakov had achieved prophecy by sleeping there. Clearly, argues the Brisker Rav, Yaakov felt strongly that religious achievement is not a free-for-all. One may not desecrate hallowed ground in order to attain spiritual heights. Next, the Rebbe cites the Netziv, who understands Yaakov’s distress differently. Yaakov was upset that he had gone to sleep instead of using the opportunity to pray in such a holy place. Here the devar Torah ends, and we, the readers, are challenged to probe the relationship between the comments of the Brisker Rav and the Netziv.

There is a fascinating, almost inverse relationship between them. Whereas the Brisker Rav emphasizes that Yaakov was upset for inadvertently taking advantage of a spiritual opportunity, the Netziv underscores Yaakov’s distress at not taking proper advantage of a spiritual opportunity. Of course, these two interpretations are not really in contradiction, and perhaps we can restate the lesson to be learned by incorporating both interpretations. A religiously sensitive person must be constantly on the alert for opportunities for spiritual growth, but he must never allow his spiritual striving to cause him to trample on religious norms.

More than a quarter of a century has passed, and yet I can still vividly recall sitting at the long table in the Talner beit midrash during seudah shelishit, listening to the Rebbe speak. His speech was precise and deliberate, not impulsive. Rav Twersky possessed great personal dignity and profound reverence for every word of Torah, and I felt that I was not just in the presence of a malach (angel), but of a melech (king). With this sefer, Rabbi Shapiro has succeeded in giving us a small taste of that feeling.

Rabbi Moshe Schapiro is a reference librarian at the Mendel Gottesman Library of Yeshiva University.

5 3 votes
Article Rating
This article was featured in the Spring 2021 issue of Jewish Action.