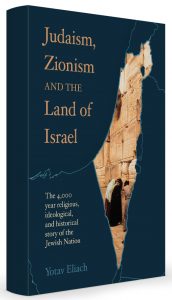 It is commonly lamented that, despite the support for the State of Israel among American Jewry, there is today a dearth of knowledge about Israel’s foundational story and the innate connection between the Jewish people and the Land of Israel. The problem is most acute among young people—indeed, where support for Israel is slightly declining—and especially on college campuses, some of which have become hotbeds of anti-Israel activism and opposition. Little of that opposition is fact-based but many Jewish youth lack the tools to confront the haters and polemicists. Too many Jews shy away from the confrontation altogether, unable to respond to accusations that Israel, for example, is an occupying force and an illegitimate colonial power dwelling on stolen Palestinian land, denying basic human rights and freedoms. It is critical to respond not with heated rhetoric but with cogent arguments, facts and data.

There was a time when Jews of a certain age could ably defend Israel’s cause. Those who lived through the Holocaust and the War of Independence, through the drama of exile and return, grew up knowing Israel’s history and struggle intimately. But Jews today under the age of fifty have no living memory of the Six-Day War or even the Yom Kippur War. They have never experienced any of Israel’s vulnerability or even the sense of a David fighting a Goliath. All they know are the recurrent media and UN indictments of Israel as an occupier, as the nation annually voted “the greatest threat to world peace” by those still largely unsympathetic to Jewish nationalism. How can this generation be educated as to Israel’s history, the majesty of its rebirth, the inherent connection of the Jewish people to the land granted by God to the descendants of our forefathers, and the drama of exile and return?

That breach has now been filled by the publication of Judaism, Zionism and the Land of Israel by Rabbi Yotav Eliach, a distinguished educator in his own right (he’s the principal of the Rambam Mesivta in Lawrence, New York) and the son of two illustrious educators. In one copiously researched volume, Rabbi Eliach sketches the story of the Jewish people from our origins until today, as well as the enduring significance of the Land of Israel. For all our understandable focus of Torah study on mitzvot and parashah, it is important not to obscure the broader narrative of the Torah: the formation of a Divinely chosen people who would be given God’s law and sent to dwell in the land of His choosing in order to create a model, moral society that would be emulated by all seekers of God. All the rest is commentary.

Most of the book focuses on modern history—the vision, challenges, setbacks and achievements of the Zionist movement, as well as Israel’s first seventy years. Naturally, choices have to be made as to which events or personalities warrant emphasis or prominence. Rabbi Eliach properly characterizes the Grand Mufti’s limited role in the Holocaust; his most malicious success was agitating against Jewish immigration to the Land of Israel in the 1930s that helped doom European Jewry. His account of the battle for Deir Yassin is appropriate, not a massacre of civilians but a hard-fought battle in which one-third of the Irgun attacking force were casualties. The battle was subsequently distorted by both sides for political reasons.

Jews today under the age of fifty have no living memory of the Six-Day War or even the Yom Kippur War.

The author also notes the bitter irony that, but for the immigration restrictions placed on Jews after the British received their mandate, Jews would have been an overwhelming majority of the population in the Land of Israel long before statehood. The British White Papers only limited Jewish but never Arab immigration, further exacerbating the population imbalance caused by massive Arab migration to the Land of Israel after the initial Zionist economic successes in the 1880s and 1890s. Until Zionism, the indigenous Arab population was always small and devoid of national aspirations, one reason why there has never in history been a national entity called Palestine, with its own government, army, currency, culture and history. That itself is an effective response to the hollow cries of “occupation.”

Rabbi Eliach’s analysis of the mixed record of Zionist rescue efforts during the Holocaust is balanced. He deftly notes that the number of Jewish refugees forced from their homes in Arab lands in 1948 far exceeded the number of Arab refugees who fled the nascent State of Israel. While Israel settled their brethren, the Arabs kept theirs in squalid camps to be used as pawns in the struggle. The recent campaign for Palestinian statehood always elides the question: why wasn’t such a state established between 1948 and 1967, when Judea, Samaria and Gaza were controlled by Arabs? His synopses of the rescue of Ethiopian Jewry and Israel’s current predicament of asymmetric warfare are excellent. He also conveys quite well the folly that was the Oslo peace process and the deceptions that were employed to sell it to an Israeli public that has, for the time being, coalesced around a consensus opposing unilateral territorial concessions.

Any work of this length is bound to contain a few mistakes, and the book could have benefited from tighter editing. Rabbi Yehuda Halevi lived in the 11th and 12th centuries, not the 14th century. It is a stretch to assert that Moses Mendelssohn, for all his flaws, “initiated” Reform Judaism in Germany. Rabbi Yehuda Leib Fishman was the leader of Mizrachi in the early years of the State, not the chief rabbi. The bombing of the Iraqi nuclear reactor occurred on June 7, 1981, not in late May. Rabbi Meir Kahane served in one Knesset, not two.

Nonetheless, this comprehensive but eminently readable book is enhanced by almost two dozen maps, courtesy of the late Sir Martin Gilbert, that illustrate Israel’s story, as well as by the full texts of documents, resolutions and speeches, including the masterful and moving oratory of Israel’s UN Ambassador Chaim Herzog decrying the “Zionism is Racism” resolution in November 1975. More importantly, supporters of Israel and fair-minded people everywhere will benefit from reading in detail how Jews returned to our homeland to reclaim sovereignty after a forced absence of nineteen centuries, and in a region packed with dictatorships, monarchies and autocracies built a Jewish state and a thriving democracy. The miracle of modern Israel is fully explicated in this wonderful work.

Rabbi Steven Pruzansky is the spiritual leader of Congregation Bnai Yeshurun in Teaneck, New Jersey, and the author of the two-volume Jewish Ethic of Personal Responsibility (Jerusalem, 2018).