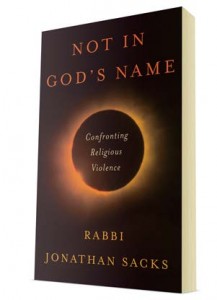 I don’t think there is any one on the Jewish scene today who combines the breadth, creativity, insight and eloquence of Rabbi Lord Jonathan Sacks. And were that not to already tip the scales in his favor, I confess to a personal identification with many of his sensibilities and agendas as well. But none of that kept me from being a little disappointed by his latest book, Not in God’s Name: Confronting Religious Violence. That being said, Rabbi Sacks definitely does succeed in bringing a treasure of fascinating sources and original insights to get us thinking about an issue that deserves the Orthodox community’s sustained interest.

Coming in the midst of a new wave of global terrorism, Rabbi Sacks’ confrontation with the religious roots of what we see daily on the news could not be timelier. He tackles this touchy and nuanced topic by dividing his analysis into three parts. The first explores the centrality of both religion and conflict in human events. After noting the outrages committed by ISIS and their ilk, Rabbi Sacks declares his interest in preventing religion from being misused by those whose outlook is born out of socio-historical frustration and abetted by a misunderstanding of the Abrahamic tradition. Accordingly, the second and central part is an attempt to present a new philosophy based on original interpretations of Biblical texts that make sacred room for the other. In that section, his main interest is exploring the notion of chosenness and how it need not imply anything negative about the one not chosen (i.e. Yishmael, Esav). The main point is succinctly summarized by his apt phrase, “God may choose but God does not reject” (p. 124). The final third section applies these and other related insights and teachings to the contemporary scene.

While the outline is quite cogent, one wonders whom Rabbi Sacks sees as his audience. Certainly not the radical Muslims he seems to be arguing against. Even if they would be open to reading the work of a rabbi, his style, assumptions and conclusions are from another world (or better, worlds). He uses Jewish tradition and Jewish history as his points of reference and speaks in the language of the contemporary Christian West. That he peppers his work with citations from the Koran and from Muslim thinkers is noble, but it is a far cry from seriously engaging the worldview of mainstream Islam, let alone its radical wing.

One of Rabbi Sacks’ favorite topics is the need to (figuratively) fight religion with religion—that there is a need to encourage a passionate religiously grounded tolerance in order to combat passionate religiously grounded hatred. That means that “we must train a generation of religious leaders and educators who embrace the world in its diversity and sacred texts in their maximal generosity” (p. 262). But, again, who is the “we” here? He admits that the Catholic Church has already done much of what he is advocating, having made sacred space for the Jews in the last few decades. So apparently, Catholicism is not in need of the new leaders that he is speaking about. Is Judaism? To the extent that Judaism and Catholicism can be positive forces for peace, the main agenda item is not moderation but precisely its opposite—the creation of more passion and dedication. I am reminded of Rabbi Norman Lamm’s pithy observation: In looking at the Islamic revolutionaries in Iran, he remarked that no matter how problematic their beliefs, their religious passion was something we could only envy.

To be fair, Rabbi Sacks makes the interesting claim that political liberalism never resolved the conflicts between religions, but rather just put them to the side. The implication is that religious conflict can always be revived unless we deal with it straight on. Hence it is not only Muslims who need to think about these issues, but also Christians and Jews. While I am sympathetic to the idea, it is not because I am afraid that Christianity will go back to the virulent anti-Semitism of the late Middle Ages. That being said, there are many reasons why religions do need to work out the place of the outsider—the most important to my mind being the implications of the belief that all mankind is created in God’s image. To the extent that this book contributes to the Jewish and Christian understandings of this important issue, it is certainly worth our communities’ respective attention.

My biggest problem with the book, however, has to do with its argumentation from Tanach. Ostensibly, we agree on the ground rules. Rabbi Sacks shows this by making some important and correct meta-statements about text and tradition, pointing out that a religious text cannot be divorced from its interpretive context (pp. 208-9) and that the existence of multiple legitimate interpretations implies that there is no definitive reading of the Biblical text (p. 218). But if there can be more than one reading, some readings are still better than others.

In the context of what Rabbi Sacks is trying to do, I think it is only on the peshat (literal meaning) level that one can make convincing arguments clearly rooted in the text—especially if one is also speaking to readers outside of the Jewish tradition. And it seems that this is exactly the type of arguments that he is trying to make. Sometimes he does so quite successfully, but at others he slips into a more homiletical mode. Because of that, some of the textual interpretations that form the main bulwark of Rabbi Sacks’ argument do not withstand careful scrutiny.

More specifically, his reading of Sefer Bereishit as a continuum of how siblings (the relationship he locates as central to the coexistence of the monotheistic religions) need to deal with one another—though not new—is certainly well supported. But when he charts new ground, his readings are more open to question. For example, he suggests that the phrase “rav ya’avod tzair” “the larger/older will serve the younger” is indeterminate and can be, and eventually would be, read the opposite way—that the younger will serve the older. This concept is not new. Rabbi Sacks cites the famous medieval commentator, Rabbi David Kimchi (Redak), who, among others, accepts this approach as well. What is new is the assertion that by Yaakov giving Esav’s blessing back to him, which Rabbi Sacks seems to be convinced of, Yaakov would definitively change the meaning of the prophecy. However, Redak says two things that Rabbi Sacks omits: 1) Even if it possible to read it both ways, the grammatical default remains that the older will serve the younger and 2) Fundamentally, Jewish tradition is unambiguous that in the messianic era, Yaakov will be dominant. (In fact, the key phrase to this effect in the Book of Ovadiah (1:21), which Rabbi Sacks tries to address in a footnote, is part and parcel of the daily morning prayers.) This is no small point. How we read peshat is rooted in Tanach, of which the Book of Ovadiah is certainly a part, but also in certain ground assumptions that Jews have always made. For example, Rav Aharon Lichtenstein, zt”l once pointed out that no matter how much a simple reading of the text might incline us to do so, we simply cannot look to David as a villain.

In any event, because Rabbi Sacks reads the phrase “rav ya’avod tzair” to be completely indeterminate, he comes to the unusual conclusion that this phrase that Rivka heard was actually just an “oracle” and not a prophecy at all. From there, he claims that it was meant to carry little weight, as such things “do not belong in Israelite religion” (p. 140). Among other unanswered questions that this raises, one wonders why Rivka would inquire and subsequently put so much weight on such an insignificant source.

His understanding of Yaakov’s reunion with Esav is even more difficult. Making a solid observation about the repeated use of the word “panim” (face) in this story, Rabbi Sacks then makes a big jump by equating this word with the blessing that Yitzchak had meant to give Esav. His basis is that Yaakov was able to get that blessing because Yitzchak could not see his son’s face, telling us that, “somehow, the idea of a face connects [this scene with the reunion of the two brothers]” (p. 134). Given that Yitzchak was blind, there was obviously more than just Yaakov’s face that he could not see! Moreover, the face is one of the things that is actually not emphasized in that scene, and not because it has no relationship to the story. When the Torah tells us that Yitzchak did not recognize Yaakov, it could easily have said that it was because he could not see his son’s face. Since it does not, this interpretation seems rather shaky.

Rabbi Sacks could have come to many of the same conclusions about the Bible’s concern for the other without some of his more debatable readings. Had he done so, it would have been a stronger book. Also surprising is Rabbi Sacks’ almost total inattention to contemporary parshanut. This is even more pronounced in his bibliography of the Biblical readings he proposes, where we do not find a single traditional Orthodox writer. Instead, the interested reader is pointed in the direction of James Kugel, Michael Fishbane and Jon Levenson, among others. I understand his desire to keep to academic standards and only cite academic writers. Still, it is a real missed opportunity not to have exposed his readership to the serious contemporary Orthodox Bible scholarship blossoming in our days.

The topic Rabbi Sacks addresses is important and his attempt to deal with it from a religiously informed reading of certain sections of the Bible is captivatingly ambitious. The importance of his topic and the creativity of his ideas join powerfully with his eloquent sermonics. Nonetheless, while they will no doubt appeal to many, I wonder whether his arguments are sufficiently powerful to convince those who do not share his conclusions already.

Rabbi Francis Nataf is a Jerusalem-based educator and thinker. He is associate editor of the Jewish Bible Quarterly and the author of multiple volumes of Redeeming Relevance on the Torah.