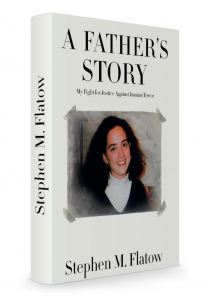 Stephen Flatow’s part memoir, part eulogy, part detective story, part spiritual journey and catharsis, comes in several parts. In this book, he discusses the tragic murder of his college-aged daughter, who had a gorgeously holy soul and a dimpled smile. Alisa Flatow died in 1995 when Arab terrorists blew up an Israeli bus near Gush Katif, the Jewish community in Gaza that the Sharon government dismantled a decade later. Alisa was studying in Israel at Nishmat—the Jeanie Schottenstein Center for Advanced Torah Study for Women in Jerusalem, while on leave for overseas studies during her third year at Brandeis University, where she was active in the Brandeis Orthodox Organization (BOO). Initially, she and her friends planned to tour Petra in Jordan, but one of them was short on funds for that trip, so they went to see Gush Katif instead. Her parents knew of the itinerary change and wished her well. It is a memory that Flatow carries, even as he notes that another Arab terrorist attack later saw people murdered—at Petra in Jordan.

I am a tough guy, but my eyes welled with tears as I read the first fifteen pages of Flatow’s book. So I put it down, went to other reading materials, and then started the book again. And again the tears welled in my eyes. As the book moved into other directions, I settled in, but the tears started coming again when I reached the last fifteen pages. For more than twenty years, I have spoken of the murder of Alisa Flatow, but only now do I know Alisa Flatow. I mention her full name twice in the prior sentence to convey that the book has achieved perhaps its primary purpose—to give her name and her life rich and honored perpetuity. Alisa Flatow emerges not as a victim but as a vibrant soul who lives.

Stephen Flatow, we learn, is a real estate attorney who grew up in Middle Village, Queens, and graduated from Brooklyn Law School. He set up his first home with his wife in Canarsie, Brooklyn, and practiced law in Jersey City. He and his family ultimately moved to West Orange, New Jersey, where he eventually helped found an Orthodox shul, serving as its first president. Throughout the book, he splices in so many personal tidbits of his life, his thoughts on a variety of matters ranging from the Brooklyn Dodgers’ move to Los Angeles to his father’s many part-time jobs that the book demands a steadier focus from the reader than do works that seem more carefully edited. Thus, the text seems to meander and ramble at times. But like certain rabbinic sermons, Flatow’s digressions, after leaving the reader wondering “Where is he going with this?” inevitably tie together to make salient points. For example, he states that the Dodgers would not have moved had Robert Moses, who controlled New York City public properties with an iron hand during the Robert Wagner administration, been more flexible when the team’s management sought a new location for their stadium. This helped teach Flatow the power of real estate and property ownership. Not only does that realization underscore his professional career—his area of practice is real estate title law—but it also helps introduce the detective part of his journey, as he seeks to find Iranian assets to attach in the United States.

For more than twenty years, I have spoken of the murder of Alisa Flatow, but only now do I know Alisa Flatow.

After the attack on his daughter, Flatow was phoned and told to fly there immediately. Arriving the next day at the Soroka Medical Center’s ICU in Beer Sheva, it soon became clear that his daughter was already dead. She appeared unscathed, but shrapnel from the bombing had entered the back of her head and killed her. There had remained a sliver of hope that the medication she had been administered to retard her brain swelling might have been negating her breathing reflex, but when the medicine wore off, it was it clear she was gone.

The main part of the book focuses on how Flatow set about to pursue justice. If he could not resurrect his daughter, he could fight for justice. His theory is that the terrorists and their sponsors must be made to pay a profoundly heavy financial price when they perpetrate an act of terrorism, with the hope that sufficient monetary judgments ultimately will deter them. In his situation, he rapidly determined the relative uselessness in pursuing legal action against the particular terrorist thugs who took credit for the bombing. It would be impracticable to assert legal jurisdiction over them or to collect from them. Instead, he undertook to identify the Iranian government’s connection with the murderous explosion. Shiite Iran was supporting Hezbollah. Israel had expelled 400 Arab terrorists from Judea and Samaria a few years earlier, and most took up residence in Southern Lebanon. When Israel later allowed them back in, after the 1993 Oslo accords, a wave of terror ensued, like the bus bombing that took Alisa’s life. It became clear that Iran had played a critical role in supporting and sustaining that wave.

Initially, President Bill Clinton personally phoned Stephen Flatow to express his pain upon hearing of Alisa’s murder and offered to help. In time, however, the Clinton administration would prove to be Flatow’s toughest adversary in collecting the $225 million judgment he was awarded by the Washington, DC, federal court that granted his verdict. To get that judgment, Flatow had to find an attorney skilled in the unique and rarely charted waters of litigating American victims’ claims against terror-sponsoring nations. He found his “dream team” in attorney Steven Perles and in courtroom trial lawyer Thomas Fortune Fay. They determined how to obtain jurisdiction by serving process on Iran, which did not have an active presence in America, via the diplomat in the DC Swiss embassy who handled Iranian interests. After the diplomat was served, he opened the envelope and then carefully sealed it and returned it “unopened.” But the federal district judge, the Hon. Royce Lamberth, deemed service proper. Iran did not attend the court proceedings, and a trial ensued with evidence unequivocally linking the Iranians to the bombing. With judgment in tow, it now fell on Flatow’s legal team to figure out how to collect.

Flatow is remarkably restrained and apolitical in detailing the disappointments and setbacks he encountered in his meetings with one Clinton administration official after another. There were concerns in that administration that Iranian assets needed to be untouched, retained as bargaining chips in the future on other issues, and that they would not suffice to pay all victims of Iranian-financed terror anyway. Flatow and his attorneys were not deterred, and they ultimately found bi-partisan Senate support from his home-state senator, New Jersey Democrat Frank Lautenberg, and from Florida Republican Connie Mack.

When Alisa was a little girl, she frequently sustained odd injuries. After someone rode a bicycle over her foot, causing her a profoundly severe injury, she asked: ‘Why do these things always happen to me?’ It is the kind of haunting question that her father, and all of us who love and fear God and His Torah, simply cannot answer.

Flatow gives the reader an insider’s perspective into the legislative process. He describes how the first terror victims’ bill that was passed in the Senate needed to be revised after its loopholes left the legislation without teeth. Ultimately, a third bill was necessary to make the text ironclad. Even then, that final iteration could pass without opposition only after it was attached to a different bill that no one could oppose.

In time, through some Internet searching and utilizing skills that he had honed during his career, Flatow and his team were able to identify certain properties, including a Manhattan skyscraper, as Iranian-government assets, and they also were able to learn of prominent foreign banks in Europe that essentially laundered Iranian currency into dollars. As a result, the United States was able to recover enormous sums in penalties imposed on those banks, and much of those sums became available to victims of Iranian-sponsored terror. However, Flatow had wanted the judgments to come directly out of Iranian assets so that the mullahs’ Shiite regime would feel the full brunt of the cost of terror. Instead, third parties had paid in, and he ruefully notes that America later sent $150 billion to Iran during the time of the Obama administration’s Iran deal [a claim which is not entirely accurate].

Along the way, amid the segues described above, Flatow discusses how Alisa changed his family’s life when, at age four, she demanded to be enrolled in a Jewish preschool rather than at the secular school her parents had planned. He asked the rabbi of the Jewish day school whether the school would change his household’s lifestyle, and the rabbi told him “no.” Years later, with the Sabbath-observant Alisa having inspired her parents to become increasingly observant, that rabbi told Flatow that he had asked the wrong question: instead of whether the school would change his lifestyle, he should have asked whether his daughter, by attending the school, would. The family became Orthodox, and their daughters and son all are grown and married, living Torah-centered lives.

There are two quotes that resonate long after one finishes the book. When Alisa was a little girl, she frequently sustained odd injuries. After someone rode a bicycle over her foot, causing her a profoundly severe injury, she asked: “Why do these things always happen to me?” It is the kind of haunting question that her father, and all of us who love and fear God and His Torah, could not and still cannot answer.

The second quote derives from the initial questioning at Flatow’s federal trial. When Flatow’s attorney began by asking him to identify himself for the trial record, saying, “Flatow, were you the father of Alisa Flatow?” he startled his lawyer by answering “no.” And then he added: “I’m still her father.”

Rabbi Dov Fischer, an attorney, adjunct professor of law and contributing editor of the American Spectator, is a senior rabbinic fellow at the Coalition for Jewish Values, congregational rabbi of Young Israel of Orange County, California and holds prominent leadership roles in several national rabbinic and other Jewish organizations.