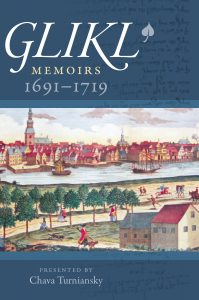 “This whole book of mine . . . was written to stave off my pointless melancholy thoughts when sorrowful brooding distressed me so.” The accidental literary celebrity who penned these words was Glikl bas Leyb, born in Hamburg in 1645 and deceased in Metz, Germany in 1724. The “seven little books,” as she referred to her memoirs, were written exclusively for her family. Fortunately, they became a remarkable historical and literary legacy for the rest of us.

A previously published edition of the work, titled The Memoirs of Gluckel of Hameln, was issued in 1977 by Schocken Books, based on a 1932 translation by Marvin Lowenthal. This widely read edition is a greatly condensed version of Glikl’s memoirs, which nearly always include historical context for her stories, numerous references to God’s involvement in all their lives, as well as fables and stories that Glikl included as moral and spiritual lessons to her children and grandchildren.

For example, in the Schocken edition, Book 2 begins, “My father had me betrothed when I was a girl of barely twelve, and less than two years later I married.”

But in this new and fully restored version of the memoirs, Glikl doesn’t mention her betrothal until after twenty-five pages of background information, such as her estimation of when she was born, lavish praise on her late husband and father for their piety and generosity, the Jews’ expulsion from Hamburg when she was three, the subsequent war between “the Swede” and the King of Denmark and how this incursion enabled the Jews to return to Hamburg, and a very long folktale that Glikl seems to have copied from a Yiddish book whose moral lesson is never to lose faith in God.

Realizing how much fuller an experience this new book would provide, I rushed to get Glikl Memoirs: 1691-1719, translated by Sara Friedman and published by Brandeis University Press in 2019. This new edition not only includes all of Glikl’s writing, but also a fascinating introduction by Chava Turniansky, professor emerita of Yiddish literature at the Hebrew University of Jerusalem and an Israel Prize laureate. Turniansky also provided the extensive annotations that give historical confirmation and context for the events and people Glikl writes about. The new translation is also livelier, providing fuller expression to Glikl’s vibrant personality.

Glikl was born in Hamburg to an upper-class Jewish family, betrothed at twelve and married at fourteen. Despite having fourteen children, thirteen of whom lived to early adulthood, Glikl was a full partner with her husband Chaim in their business of buying and selling precious gems and pearls. They also loaned money at interest. Glikl’s shrewd analyses of business deals earned her husband’s total trust in her judgement. On his deathbed, he told those closest to him, “My wife is in charge of everything.”

When I first read the memoirs, Glikl’s numerous references to plague—or the fear of it—seemed so antiquated as to be almost other worldly. Now they carry an eerie resonance.

After Chaim died, leaving Glikl with eight young children, she attended the commercial fairs in Leipzig, Frankfurt-am-Main and other towns, buying, selling and trading. Not only was she now the family’s sole support, she was determined to marry all her unmarried children into other “respectable” families, which required substantial dowries and the promise of support afterward. Her business acumen was acute, and eventually she rescued one son from his failing, debt-ridden fabric business. She bought the business and made it a success. She writes unabashedly about business dealings, profits and losses and her knowledge of other families’ financial affairs. What would appear unseemly today must have been acceptable in Glikl’s time.

Glikl’s memoirs provide a candid and remarkable window into late seventeenth-century European Jewish history. She recalls her father hiding ten refugees who had fled Poland during the notorious Chmielnicki massacres in 1648-49—at great personal risk. He sheltered and cared for them in their attic, though they were ill with infectious disease. Glikl’s grandmother died as a result of helping to care for them.

When I first read the memoirs, Glikl’s numerous references to plague—or the fear of it—seemed so antiquated as to be almost other worldly. Now they carry an eerie resonance. Glikl and Chaim had to send their four-year-old daughter into hiding with a maid for many weeks when women of the community (whom Glikl calls “such big cowards”) were convinced the child had plague. Glikl never believed it and was eventually proven correct:

“Indeed, the child was healthy and well, gamboling around the field like a young ram. We said to the Hanoverians: ‘What was the point of your nonsense? You see that our little girl is healthy and well, thank God, and presents no danger whatsoever. . . Let the poor child come back here.’”

The townspeople still refused until more time passed, and their fear was understandable considering that the Jews’ rights to live and conduct business anywhere was precarious and could be revoked at whim. Any suspicion that a Jewish home contained plague would guarantee their immediate expulsion.

Shabtai Zvi and his messianic promises had mesmerized Jews worldwide. Following so closely after the massacres in Poland, the fraud was emotionally devastating. Glikl’s father-in-law had sold his home and packed his belongings, waiting only for the letter indicating the time had come to move to the Holy Land. Glikl writes, “Ah God, Lord of the Universe, we were hoping that You, compassionate God, would have mercy on Israel, Your wretched people, and redeem us . . . ” But as she does for all of life’s difficulties, Glikl calls on her unshakable faith to sustain her: “Your people do not despair; they await Your mercy daily that You may redeem them. Even though he may tarry, still I await him every day.”

Glikl’s memoirs are filled with colorful characters and dramas involving the Jewish community.

Anti-Semitism was treated as a basic fact of life. The Jews’ focus on having liquid assets was a logical extension of being subject to onerous and discriminatory taxes and sudden expulsions, such as when Jews lost the right to live in Hamburg and had to move to Altona, traveling each day back to Hamburg to conduct business.

Jews could never expect justice from the authorities when they were victimized. One of Glikl’s most dramatic stories involves a young widow named Rivka, who daringly set out to prove that her husband had been murdered by a gentile who robbed him. It was an extraordinarily dangerous undertaking, because if Rivka’s mission failed, the local authorities warned, “Beware, if you do not find the body, you are all lost, you know the rabble here in Hamburg. We won’t be able to stop them.” Fortunately, Rivka’s sleuthing paid off.

Glikl’s memoirs are filled with colorful characters and dramas involving the Jewish community, such as shifts in rabbinic leadership; shidduch negotiations, business successes and reversals; family joys and sorrows; road trips to fairs or to weddings; and worries over the ever-changing, fickle political arena and how sudden power shifts affected the Jews.

In writing about one shidduch, Glikl records that a dispute over the amount of the dowry she promised to the bride’s family caused “major arguments” and ended up in the rabbinical court:

“. . . my future in-law, the distinguished Reb Moshe, thought he could squeeze a little more out of me. But when he saw he could squeeze nothing more out of me, . . . the wedding took place in mid-Tammuz, as respectable and splendid an affair as we Jews can manage. Prominent householders from all over the country attended the wedding” (p. 240-241).

When describing emotional losses, she writes with florid emotion, reminiscent of old-time Yiddish dramas. Glikl was a woman of exceptional storytelling talent, and given the timelessness of her concerns, it is easy to relate to many of her life’s challenges, joys and sorrows, even though she lived 300 years ago.

Glikl gave this work no title. In fact, she referred to it only as “dos vos ich shrayb,” (“this that I am writing”). While Glikl’s high level of literacy was not surprising in this early modern period, when Jewish women wrote letters and literary compositions and consumed a thriving literature of mussar works written for them, these memoirs were sui generis, utterly different than anything published until then in Yiddish or Hebrew.

An entry in the Metz community Memorbuch (German for memory book) describes Glikl as a pious, generous woman who was “most wise in the trade of precious gems and also most learned in the rest of the respectable virtues.” No mention is made of her writing, yet these memoirs are not only a rare historical gem, but also a captivating and emotionally riveting read.

Judy Gruen’s latest book is The Skeptic and the Rabbi: Falling in Love with Faith (2017).

5 1 vote
Article Rating
This article was featured in the Winter 2020 issue of Jewish Action.