A personal note: When I began writing this review, I was fortunate to have a primarily academic interest in the book. That changed just as I was finishing the review, with the loss of my father, Dr. Lawrence Davis, Eliezer Chaim ben David, z”l. Though no book can provide definitive answers to all the practical questions and matters of custom that arise, I was grateful for the framework Rabbi Brofsky’s work provided, from which I was able to ask and understand more deeply what I was doing. 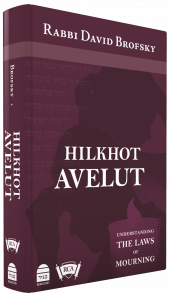 Rabbi David Brofsky’s Hilchot Avelut: Understanding the Laws of Mourning is important not just for the halachic information it provides but for the relationship to halachah it displays. Already in the Foreword, Rabbi Mark Smilowitz, a seasoned Jewish educator, writes movingly of his devastation over the passing of his father, in whose memory the book is dedicated, and how a book on the laws of mourning brought him comfort. How could a legal text bring comfort? To many, the study of halachah might seem dry and technical. Yet, Rabbi Smilowitz’s account illustrates how halachah itself, and his personal connection—both intellectual and emotional—with its study, in all its rich complexity, brought him back from his grief.

Rabbi Smilowitz speaks of “two faces” of halachah, emphasizing that both contributed to restoring order and meaning to his world: the stability of the “firmly anchored permanence of law,” and the more “subjective experience stimulated by thoughtful reflection on . . . the laws and their meanings”; or, more succinctly, action and understanding (p. xvii). Both aspects can reach the soul, opening the door toward a very different relationship to halachah and its study than might be conveyed by some books of halachah and, perhaps, by too many classrooms.

Rabbi Brofsky’s introduction demonstrates his shared commitment to presenting both faces—the laws as well as their meanings—and he structures the book with the goal of ensuring that both faces, as distinct from each other, are served: He first offers a summary of practical law to guide the mourner who must know what to do, and spends the rest of the book delving more deeply into those laws for the sake of the student or the mourner who wishes to develop a meaningful understanding.

In my classes, I speak of two types of “whys”: “Why do we do X?” can be answered in terms of a source for the fact of X (pointing to the text that prescribes X) or in terms of rationale (explaining the meaning behind X, such as ideas reflected or engendered by its observance). The former is historical while the latter is conceptual. In Hilkhot Avelut, Rabbi Brofsky addresses some topics thoroughly from both “why” angles, tracing the historical development of practical rulings and explaining the rationales behind each authority’s position. Chapter Four, “The Obligation of Avelut: Source, Nature, and Reason,” stands out as a particular example of this balance and to some degree represents the core of the book. Every element of hilchot avelut must necessarily draw its meaning from the fundamental ideas expressed about avelut as a whole, so in a sense, the global discussion in this chapter addresses the meaning of each specific law that arises in the rest of the book. I would have liked to have seen more of this balance throughout the book.

Rabbi Brofsky excels at offering accessible and illuminating historical descriptions of halachah: within a given topic, he cites one or more Talmudic passages, records how different Rishonim rule, states which rulings the Shulchan Aruch accepts and shares what later scholars have said to actually do in particular scenarios. Sometimes he includes rationales behind these rulings, but at times, the reader may find sections that present what feels like a laundry list of opinions without much underlying meaning.

The juggling of all these different faces raises an interesting challenge that ultimately represents a feature, rather than a bug, of the halachic system (as well as of Rabbi Brofsky’s presentation of it). As mentioned, the author’s stated strategy for doing it all involves offering a practical list of laws and then separately delving into their backgrounds and meanings; it turns out, however, that these different faces of halachah cannot be divided so neatly. The practical summary contains a number of passages exploring the meaning (or meanings) behind some of the laws. For instance: a brief introductory note that the states of mourning “reflect and correspond to different stages of bereavement” (p. 1); a list of several possible reasons behind burial and indications of its importance (p. 3-5); a summary of a midrashic tradition at the root of the custom to formally greet mourners in shul on Friday night (p. 17). These ideas are not strictly practical and are repeated or expanded in the rest of the book, but the author justifiably includes them here as well because the laws cannot be presented completely bereft of meaning. In halachah, practice and meaning are interwoven and simply cannot be detached. The author’s appreciation for that complexity is palpable throughout this book, forming its backbone and giving life to its content.

Any area of halachah involves, to some extent, a balance between technical, practical, text-based halachah on one hand, and the lived experiences and emotions of those who practice it on the other. This is certainly true when it comes to the emotion-laden area of hilchot avelut, and Rabbi Brofsky repeatedly and importantly notes the need for sensitivity in making halachic determinations under emotionally difficult circumstances.

Rabbi Brofsky is aware of, and sensitive to, issues related to women’s experience of halachah in general. One example is a footnote at the beginning of the book indicating that despite the author’s use of male pronouns, “the same halakhot generally apply to female mourners as well, except where otherwise noted.” Two issues that could have been addressed in respect to female mourners are burial and Kaddish. Sometimes female mourners or extended family members are not allowed to participate in the mitzvah of burial—shoveling dirt into the grave. A halachic treatment of this subject would be helpful.

In the realm of Kaddish, the author’s presentation of the history and meaning of Kaddish is particularly masterful, from Talmudic passages expressing the power of the line “yehei Shmei Raba mevorach . . .” to the details, comprehensive but without oversaturation, of the development of the Mourner’s Kaddish specifically. The question of whether a daughter may recite Kaddish is also addressed thoroughly, tracing the discussion from the earliest sources and explaining many of the considerations behind different rulings. What is missing, however, is the experiential side—the emotions and complications that arise for a woman in deciding whether or not to say Kaddish and in attempting to do so. Those factors may or may not play a role in determining halachah, but as in other situations fraught with layers of emotional complexity, there is value simply in acknowledgment.

On the whole, Hilkhot Avelut is a thorough, balanced and engaging presentation that, in addition to providing extensive knowledge of its particular topic, offers a window into the vast depth and breadth of halachic literature through the eyes of an expert who lives and breathes halachah in all its facets.

Sarah Rudolph is an editor, a Jewish educator and freelance writer and the director of TorahTutors.org. Her essays have been published in a variety of Internet and print media, including Times of Israel, Kveller, Jewish Action, OU Life, Lehrhaus, Tradition and more.