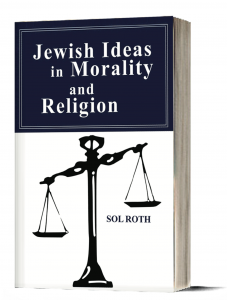 Years ago, I read an account of a concert in which Buddy Rich, a famous drummer, opened for Frank Sinatra. The author of the account groaned, not believing a drummer could fill twenty minutes, only to be held in thrall along with the rest of the audience by Rich’s virtuosity. Rich closed with a long, challenging piece, after which Sinatra walked on stage, looked over at Rich, back at the audience, and said, “There’s something to be said for sticking with a thing.”

I was reminded of this story while reading Jewish Ideas in Morality and Religion by Rabbi Dr. Sol Roth, professor at Yeshiva University and the Rabbi Isaac Elchanan Theological Seminary, as well as rabbi emeritus of Fifth Avenue Synagogue. His four previous books all have the phrase “The Jewish Idea of” in their titles (his first book, the lone one without this phrase, is titled Science and Religion). Rabbi Roth clearly cares about ideas and believes they can help us build our most authentic Jewish lives. And, as Sinatra said, there’s something to be said for sticking with a thing, because Jewish Ideas in Morality and Religion trucks in ideas, and trucks well, clearly and illuminatingly.

The author makes his dedication evident in the Introduction, where he concedes that some themes recur throughout the book. Among those, he mentions the proposition, “Mankind desperately needs a substantial increase in rationality.” It is a powerful point, a reminder that we are supposed to think before we act and are well advised to purify our emotions and instincts in the forge of reason, to ensure that we choose our paths carefully in line with what calm and sober thought tells us.

Rabbi Roth’s devotion to ideas is not an indication that he lives inside his mind. His next recurring theme is: “Judaism gives priority to human action over human thought.” With all the religion’s devotion to study and thought, “action is the superior good.” He does not seek to analyze ideas as a sterile intellectual exercise; he comes to share those which will fuel our best choices, if we allow them to.

And he gives us many such ideas. Of the almost 250 pages in the book, I found I had folded the flaps on more than thirty, containing points I wanted to be able to easily find the next time I picked up the book. I will not share all thirty, but a few will serve as fitting examples of how readers can expect to find themselves enriched and enlightened should they make the good choice to read this book.

I noticed the presence and prominence of the first idea on my own, it being impossible to avoid tripping over. The author himself called attention to its ubiquity, which he justified as a function of its “foundational importance”: the principle of the Covenant.

For Rabbi Roth, covenants—especially the Jewish people’s covenant with Hashem—are not deals or transactions. Covenants create unconditional commitments, with mutuality of obligation rather than reciprocity. Should one party to a covenant fail to live up to his/her/their obligations (as the Jewish people have, many times), the other side may have the right to react in various ways (such as Hashem allowing invaders to destroy the Temple and exile the Jewish people). Reactions within a covenant are different than abrogating it, which can never occur, in Rabbi Roth’s view. The changed vocabulary has already enhanced my experience of my relationship with Hashem, and with people with whom I have covenants as well.

The idea’s deceptive simplicity might blind us to its power. Jews must keep the Torah and must act as Hashem wants, regardless of their decisions about belief or their judgments about how well Hashem, as it were, is keeping His side of the bargain. By the same token, no amount of wrongdoing on our nation’s part can tear us loose from our connection to Hashem, or absolve Hashem completely of His connection to us. However Jews construct their lives and world, the covenant will always be part of the picture, whether they choose to notice it or not.

The unavoidable obligations of our covenant should not be mistaken for a life as a drone, doomed to the drudgery of acting as some distant God commanded. In his discussion “Wisdom—Its Religious Component,” Rabbi Roth speaks of “reverence, the intense experience of a relation with God” as the best basis for “the claim that the acquisition of wisdom is the means of achieving the summum bonum” (the highest good, the ultimate goal of life). Moreover, Rabbi Roth reminds us that achieving the summum bonum brings a joy even more intense than experienced in healthy relationships between spouses; when watching children carry forward cherished values; or in encounters with a revered rabbi and teacher. The highest joy comes from relationship with God.

While I gravitate toward delineations of how to serve and relate to God, the book casts a wider net as well, with insightful and enlightening sections on Individual and Social Values, such as freedom and peace. At the end of the chapter “Justice and Love: Which Has Priority?”, Rabbi Roth suggests a role for each—justice leading to laws which help resolve conflict, love leading to “spontaneous acts of generosity” that foster social connections and attachments.

I have long thought that too many of us, Jewish or not, focus too much on law as the sole organizing principle for life and society, so I cheered when the author made this point, which cannot be made too often. We need laws, but we also need to remember that following the law does not, and cannot, constitute the whole of an exemplary or even good life. We must also act lifnim mishurat hadin, a phrase which Rabbi Roth translates as “beyond the line of the law,” for reasons he explains in a chapter of that name.

Great is my temptation to run through the Table of Contents, unpack the titles of each chapter and give over the basic sense of what is taught in each one. But I will include only one more, the closing chapter, “Morality in War: Civilians in the Context of War,” in which the author takes a clear-eyed view of how exceptional war is in terms of morality, how delicate the project of defining an innocent civilian and an enemy. As the experiences of the Israeli Army over the past forty years have shown, these crucial questions matter, particularly when dealing with an enemy who purposefully and deliberately blurs the lines, seemingly in the hopes of catching soldiers killing civilians, some innocent, some not.

Almost eight years ago, Steven King published a short story titled “Herman Wouk Is Still Alive” (unfortunately he passed away last year at the age of 103). Rabbi Roth, a relative youngster at almost ninety-two, is very much also still alive, still patiently calling us to ideas which shape our actions and enliven our service of our Creator.

Rabbi Dr. Gidon Rothstein teaches Daf Yomi at the Young Israel of Scarsdale and online for the Webyeshiva. He is the author of Jewishly themed fiction and non-fiction works, including the forthcomingThe Making of the Messiah, 2048. He lives in Riverdale, New York.