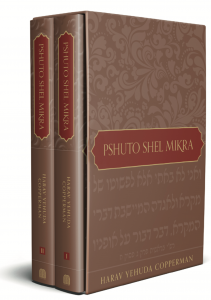 Rabbi Dr. Yehuda Cooperman (also spelled Copperman) was best known, in his over fifty years of leadership, as the founding visionary of Michlalah-Jerusalem College, the flagship seminary for serious textual Torah study for women in Israel. Rav Cooperman was an organizer, administrator (and fundraiser) as well as an accomplished teacher. Additionally, he gained a formidable reputation in the area of scholarship. Not only was he a master at conveying the words of the Torah, he was also adept at analyzing, researching and explicating the words of Tanach and Chazal, as well as early and latter-day commentators. He was particularly taken with Rabbi Meir Simchah of Dvinsk (d. 1926) and his classic Meshech Chochmah, on which Rav Cooperman wrote a comprehensive, five-volume commentary that is a staple of many Jewish bookshelves.

Pshuto Shel Mikra is a new rendition of an earlier work by Rabbi Cooperman titled Kedushat Pshuto Shel Mikra (Mossad HaRav Kook, 2009; 2 volumes). In this new work, Rabbi Immanuel Bernstein, Rav Cooperman’s longtime study partner, has translated and adapted the original sefer and added a few pieces from Rav Cooperman’s other works to give a more well-rounded view of his approach. (It would have been helpful to include a brief biography of this visionary of Jewish education.)

Rav Cooperman’s stated purpose in publishing Kedushat Pshuto Shel Mikra was to demonstrate that the words of Chazal, midrashim and the comments of a number of Rishonim accord with a careful, nuanced reading of the peshat of the text. Whether peshat means “literal interpretation,” “contextual meaning,” “original intent” (the way the text was intended at the time of its giving) or some combination of these—there is little question that midrashei Chazal (and most critically, midrashei halachah) seem to veer away from that meaning. How often has a talmid challenged his rebbe in a high school Gemara shiur regarding a challenge or support invoked by the Gemara from a verse: “But that’s not what the pasuk means!” Rav Cooperman’s objective in much of what he taught and in this sefer was to show his students and readers that with a carefully guided reading, based on understanding the methodology of how the Torah expresses itself, we can see that the final halachah squares with the “Pshuto Shel Mikra.” He emphasized that by looking at the particular idioms of Tanach—the “signon hamikra”—and working with the assumption that Chazal saw the text in the same nuanced way, we can bridge the seeming chasm between midrash and mikra.

Rav Cooperman’s world of study is a completely enclosed and synchronous one, working with the text as if it were all composed at a single time, outside of and unaffected by history. He uses midrashei Chazal to explain midrashei Chazal. This is, perhaps, a weakness in the approach, and one that will limit those who are persuaded by his arguments. They will be limited both by their inability to respond to challenges from outside of that viewpoint, as well as in their own breadth of understanding. Nonetheless, for those who view the text of the Torah as ahistorical and unimpacted and uninformed by external considerations—such as philology, cultural influences, world history, et cetera—this will be a delightful read. It is important to note that Rav Cooperman does not shy away from challenging issues, whether textual or ideational.

Just to whet our appetites, here are a few gems:

Commenting on the statement in Shemot 6:20 that Amram married his aunt (a post-Sinaitic prohibition [see Vayikra 18:12]), Rav Cooperman cites the commentary of Ba’alei haTosafot who note that “since Moshe was born from his father’s aunt, therefore the punishment of karet [spiritual excommunication] was not written in connection with the ervah of an aunt, out of respect for him.” He interweaves a perceptive explanation of this comment (and expands it to include the problem of Yaakov’s marriage to two sisters) with earlier comments of Ibn Ezra and Rabbeinu Bachya; he then cites Abarbanel’s objection that since these prohibitions were given at Sinai, we wouldn’t expect a punishment meted out to anyone who “violated” them prior to that point. Addressing this, Rav Cooperman builds on an approach proposed by the Maharal that even though these great men lived before the giving of the Torah, and therefore were not technically obligated to observe the commandments, their stature demanded that they observe those laws that they knew through Ruach Hakodesh would one day be prohibited. Assuming that the mitzvot, in all of their details, were known to the Avot and other generational leaders in Egypt, we then view their having married an aunt or two sisters as a “heter,” a “permit” to violate an ideal (which was, in any case, permitted to them). He then boldly avers that “the heter reflects the madreigah” and that not everything permitted to the commoner is permitted to someone of great standing. In this mini tour-de-force, the author demonstrates both erudition and near-encyclopedic knowledge of the relevant commentators, spanning the entire post-Biblical corpus of commentary.

It is important to note that Rav Cooperman does not shy away from challenging issues, whether textual or ideational.

At the end of this chapter, Rav Cooperman also introduces Ibn Ezra’s approach, which sees numerous verses as chiasms (a literary structure patterned as A-B-B-A and so forth, although curiously he doesn’t use that term), and he uses Ibn Ezra’s commentary on Shemot 17:7 as an example: “He called the place (a) masah and (b) merivah over the (b) quarreling [riv] of Bnei Yisrael and over (a) their testing [nasotam] Hashem.”

One final example highlighting Rav Cooperman’s breadth and depth—and innovative approach—is his explanation of a seemingly trivial verse in the beginning of Sefer Devarim. Moshe begins his farewell speech with a recap of the history of the past year of travel, recounting the travels on the East bank of the Jordan River, most of which are detailed in the narrative in Parashat Chukat. In Devarim 2:13, Moshe quotes Hashem as commanding them: “kumu ve’ivru lachem et nachal Zared—arise and cross over the Zered ravine.” Rav Cooperman poses a question which a sensitive reader of Tanach, especially one who has been sensitized by deep engagement with midrashei Chazal and Rashi’s commentary, would ask: what is the purpose of the word lachem (for you) in this verse? He then takes us back to perhaps the most famous instance of this phenomenon, “lech lecha” (Bereishit 12:1), and notes Rashi’s comment there—“lecha: for your benefit and for your good.” Rav Cooperman asks why Rashi does not comment on lachem here in Devarim (in fact, the word lachem is completely omitted in the dibbur hamat’chil). He then cites the Maharal (again demonstrating his deep familiarity with the supercommentaries on Rashi) and, with a brief apologia, disagrees with the Maharal and proceeds to present an elegant presentation which Rav Cooperman refers to as “Torat Rashi”; to wit, Rashi’s overall goal in writing his commentary. He maintains that even though Rashi’s method was to resolve peshuto shel mikra (note: what this means is subject to serious debate. See Ibn Ezra’s comments near the beginning of his Safah Berurah; Sarah Kamin’s work Rashi: Pshuto Shel Mikra uMidrasho Shel Mikra [Jerusalem, 2000] has a clear, comprehensive presentation of the issues and approaches), Rav Cooperman maintained that Rashi’s broad goal in composing his commentary was to “bequeath to the Jewish People a body of knowledge that contains the information and outlook of ‘Torah culture’ which Rashi feels is essential and indispensable for a person who learns Chumash” (p. 649). Based on this, he argues that Rashi’s omitting a comment on lachem in Devarim 2:13 is because he didn’t have an answer that would be “appropriate to include in his peirush” (ibid.).

Even though much of his energy is focused on Rashi’s commentary and his use of midrashei Chazal, Rav Cooperman had many major mainstream commentators (within what the twentieth century considered to be “mainstream”) at his fingertips, and utilized them wisely and effectively to build his methodologic arguments as well as his defense of the harmony between Torah Shebe’al Peh and Torah Shebichtav.

The translation is consistent and clear, and Rabbi Immanuel Bernstein is to be applauded for doing a yeoman’s job of presenting his chavruta and teacher to those in the English-speaking world who did not have the merit of attending Michlalah (or of marrying one of Rav Cooperman’s thousands of talmidot).

Rabbi Yitzchak Etshalom is rosh beit midrash at Shalhevet High School and chair of the Bible Department at YULA High School for Boys in Los Angeles.

5 1 vote
Article Rating
This article was featured in the Spring 2020 issue of Jewish Action.