The first noteworthy aspect of Rav Noach Weinberg: Torah Revolutionary is that the biographer, Rabbi Yonoson Rosenblum, is an outsider to the Aish HaTorah world that Rabbi Weinberg founded. This, it turns out, is by design. As Rabbi Rosenblum writes in the volume’s preface, “Aish wanted the biography to be written by someone with no institutional connections, who could provide a more objective overview of its subject . . . they did not want the biography to whitewash the controversies surrounding Rav Noach and his mission” (p. xv). This not only facilitates a representation of Rav Noach’s critics alongside his own ideals and methods, but also allows for the presentation of details that may have been left out by a biographer closer to the subject. For example, there is no dancing around the fact that Rav Noach’s mission necessarily required sacrificing a great deal of time with his wife and twelve children, and that various challenges to his approach were not without merit. This clarity greatly enhances the value of the biography. 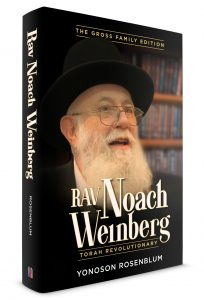 The book can be divided into three overlapping topics. First are the details of Rav Noach’s life and his unique approach to kiruv. A story about the young Rav Noach illustrates one of his fundamental ideas about education that remained consistent throughout his life. He asked his older brother, Rav Yaakov Weinberg (later rosh yeshivah of Ner Yisroel Rabbinical College), how he knows whether traditionalist Jews are correct in their rejection of the theory of evolution. After telling readers that Rav Yaakov’s response was to direct his younger brother to books on the subject, Rabbi Rosenblum writes that Rav Noach:

. . . could not simply accept things on the basis of mesorah (tradition). It had to make sense to him. He wanted proof. In that vein, he always told newcomers to Aish HaTorah that it was ridiculous for them to rely on the secular version of Judaism they imbibed growing up. That was tantamount, said Rav Noach, to learning capitalism from the Kremlin or Mao’s Little Red Book. But he would always add, “Don’t believe us either. Check it out for yourself” (p. 24).

This approach to kiruv, based around developing a rationally and personally compelling sense of emunah and hashkafah, proved to be a major point of disagreement between Rav Noach and his peers. He found himself alienated from his earliest attempt to create an institution for ba’alei teshuvah (what would eventually become Ohr Somayach) due to the fact that he “insisted that talmidim (students) first gain some sort of overview of the Torah before entering into complexities of Talmudic argumentation on topics totally foreign to them” (p. 75). In contrast, his former partners felt that immersion into Talmudic learning should be immediate. Furthermore, Rav Noach’s goal was to see his talmidim eventually fighting assimilation on the front lines, serving as a point of contact between Torah and Jews with little to no grounding on the subject. As such, his students “needed to be able to convey Torah hashkafah with clarity. And for that they required a whole picture.” In Ohr Somayach, on the other hand, the goal was for students “to advance to the point where they can integrate fully into a mainstream yeshivah or reach the equivalent level within Ohr Somayach itself” (pp. 75-76). The fact that these differences proved so insurmountable that Rav Noach chose to begin his work from scratch rather than compromise his mission showed just how much faith he had that Hashem was behind him and working to ensure that spiritually drowning members of Klal Yisrael would always have lifeboats in the form of his students.

The second topic covered in the book is the growth of Aish HaTorah as an institutional brand. Rabbi Rosenblum chronicles at length not only the establishment of the Dan Family Aish World Center in Jerusalem, but also the branches in Tel Aviv, St. Louis, Toronto, Los Angeles, New York City, London and Moscow in terms of both curriculum development and manpower. No detail is spared in explaining the intricacies of Rav Noach’s famous courses entitled “48 Ways to Wisdom” and “Five Levels of Pleasure” in addition to the birth of Aish Discovery Seminars, Aish.com, Hasbara Fellowships, HonestReporting, and even the mainstream-oriented Project Inspire. In these chapters, readers learn not only what each of these programs are and why they were seen as important ventures, but also how Rav Noach and others went about fundraising, marketing and managing logistics in order to get them successfully off the ground. Of particular interest to a reader may be the trials and tribulations faced by Aish LA in being the first-ever organization (Jewish or otherwise) to provide SpeedDating® as a venue for singles to meet in a controlled environment. Though the format would eventually take the nation by storm, it took many conversations with donors, posekim and critics to make it happen.

The third subject consists of the lives and experiences of the individuals who worked with and were inspired by Rav Noach. Even though Rav Noach is the main subject of this book, Rabbi Rosenblum goes out of his way to also introduce and provide the continuous narratives of many individuals who were influenced by him. By the end of the work, I found myself thoroughly invested in the stories of Rabbi Chaim Willis, Rabbi Nachum Braverman, Lori Palatnik, Harvey Hecker, and numerous others whose stories and achievements were driven by their connection with Rav Noach. Reading of their earliest interactions with Rav Noach also did much to help me piece together the ins and outs of what made his approach to kiruv so powerful.

His approach essentially consisted of four steps: 1. know what you know, 2. ask any questions that you have about what you don’t know, 3. search for the answers by exploring Judaism’s core texts on their own terms and challenging your preconceived notions, and 4. have the courage to take the answers you find to their natural conclusions in your life. All of this, however, was done while Rav Noach demonstrated an unyielding confidence in the truth of the Torah as ratzon Hashem (Divine will) alongside a legitimate, heartfelt concern for the spiritual wellbeing of those to whom he spoke. Neither a change in mentality nor in practice can be rushed. Each person has his own pace and any additional positivity that a Jew gains toward Torah and mitzvot is a victory in its own right. How many within our communities possess this level of confidence and ahavat Yisrael? How much better would the global Jewish community be if each and every one of us explored our own convictions more deeply, developed our theological confidence and brought it with us to battle the tremendous desecrations of Hashem’s Name that are religious disillusionment and assimilation?

Rav Noach Weinberg: Torah Revolutionary is not just a moving tribute to a great man and the global movement he started. It is also a call to action to all in our community who tell themselves “kiruv isn’t for me” or are uncertain about the basic principles of our religion. As Rav Noach wrote in his spiritual will: “I instruct, implore and advise each and every one of you to spend ten minutes every night to first focus on the terrible profanation of Hashem’s Name in the fact that a majority of the Jewish people deny the validity of Judaism and our charge of being a light unto the world. Secondly, to focus on the pain of our Creator, the subsequent pain of mankind, and to think what you can personally do about this problem” (p. 551).