A few years ago, I called a rabbinic colleague for whom I was covering while he was visiting family in Eretz Yisrael. “I need a favor,” I told him. “A mental health colleague in Israel was raving about a work that came out in Hebrew, written by a relatively unknown social worker, Rabbi Shlomo Hoffman. Could I trouble you to pick it up for me?” “Schwartz,” he responded, “I already got you a copy. My brothers told me this is one of the most important musar works of our generation, from one of the biggest thinkers in Israel. It’s already selling here like hotcakes.”

When he got back from Israel, we sat together and shared the brand-new work. We marveled at the author and the breadth of his knowledge. What we found most incredible is that we had barely heard of Rabbi Hoffman. 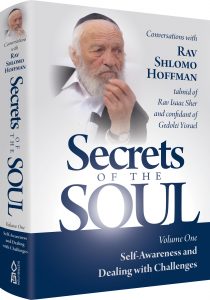 Who was Rabbi Shlomo Hoffman? It’s hard to actually pin him down. He was a devoted talmid of gedolei Yisrael, especially of Rabbi Yitzchak Eizek Sher, zt”l, rosh yeshivah of the Slabodka Yeshiva, and of the roshei yeshivah of the Chevron Yeshiva. He clung to their teachings and was granted the privilege not only to learn from their Torah, but to learn from the way they used their Torah knowledge to live and impart life lessons. Rabbi Shlomo Hoffman was also a gifted therapist who utilized his talents to evaluate and help rehabilitate convicts from all spectrums of Israeli society. His word was accepted as bond in the Israeli secular court system, quite atypical of your average talmid chacham in the Chareidi community. He was a source of counsel to whom gedolei Torah, most notably Rabbi Elazar Menachem Shach, turned for advice and perspective. And he was a fantastic rebbe to the students who flocked to him to study Torah. But as he used to say, “This isn’t Hoffman’s Torah. It’s the Torah of the Rambam, the Vilna Gaon and Rabbi Yisrael [Salanter].” His humility was probably why he remained such a mystery outside of his circles.

Now, thanks to the efforts of Rabbi Meir Simcha Stein, Rabbi Hoffman’s thoughts and approach have been published in English for a wider audience. In this work, Rabbi Stein first introduces us to Rabbi Hoffman in a masterful biographical sketch that paints a picture of the uniqueness that lent Rabbi Hoffman the authority to comment on the topics that are the main focus of the book, namely, dealing with challenges and developing a sense of self-awareness. Rabbi Stein then leads us to a seat around Rav Shlomo’s table for a chance to discuss, listen and learn from the master as if we were sitting in the room together with him and his students. That Rabbi Stein was able to do this in the Hebrew version was not an easy feat, but to achieve the same effect in English is nothing short of remarkable. To me, this was the best part of the work—getting a feel not only for the responses and advice of the speaker, but also to be able to listen to, consider, appreciate and utilize the discussion, both for myself personally as well as in my pastoral and psychotherapeutic practices with others.

My rabbinic colleague and I debated how to properly read the book. One could read the work as a sefer, focusing on the twelve chapters of Torah thoughts from the Rambam, the Vilna Gaon and Rabbi Yisrael Salanter. One who does so will derive great insight. Another approach would be to read the work as a self-help guide, and again, the reader will find vast amounts of unique and practical knowledge. A third approach would be to read the stories, which aim to impart life lessons, and benefit from the wisdom inherent in them. My colleague and I agreed that to fully appreciate Rabbi Shlomo Hoffman, you need to read the work with all three goals in mind, possibly necessitating reviewing it three or more times. One who does so will savor each reading and come away with a deeper understanding and appreciation not only of Rav Shlomo but of himself or herself too.

Let me illustrate with an example. In one chapter, the author shares Rabbi Hoffman’s approach to the dilemma of using fear as a motivator in the avoidance of sin. Some argue that one can grow in avodat Hashem when one experiences guilt and emotional pain as a result of sin. Others believe that this approach will only lead to further spiritual breakdown and even more sin. Rabbi Hoffman notes that one can find sources in the Jewish tradition for both viewpoints, each of which has merit. If one is driven toward self-advancement as a result of the emotional turmoil brought about by sin, then the turmoil is purposeful. However, if the emotional distress stymies one’s spiritual growth, then it is destructive. To make his point, he shares a comment from the Vilna Gaon (commentary to Mishlei 10:27) who notes that, unlike other fears, yirat Hashem will add to one’s days. Rabbi Hoffman explains that the Vilna Gaon is giving us a directive in life with regard to yirat Hashem: one must focus not on a particular wrongdoing or sin, but rather on what one must do to grow in avodat Hashem. In other words, focusing on the sin itself, and the guilt and fear associated with it, can destroy a person and prevent progress. Focusing on the means to repair and strengthen one’s relationship with Hashem adds to one’s days and to his quality of life. One needs to find paths in life that uplift him and propel him forward.

To strengthen his point, Rabbi Hoffman tells a story of an aged Rabbi Isser Zalman Meltzer, who, sensing that his death was approaching, used his remaining time on earth to finish his Even HaEzel commentary on Kodashim. He used the fear of death to drive him toward finishing his project.

Rabbi Hoffman describes the difference between how he and Rabbi Shach responded when observing Rabbi Chatzkel Levenstein, the famed mashgiach of the Ponevezh Yeshiva, daven on Rosh Hashanah. Rabbi Hoffman was unable to pray in front of the mashgiach because he sensed the awe of the holy day radiating from Rav Chatzkel’s face, which interfered with his own ability to concentrate. Rabbi Shach, on the other hand, said that the expressions of fear on the mashgiach’s face offered him a more satisfying and deepened prayer experience.

The reader of this book will gain from such insights. The student studying Rabbi Hoffman’s writings as a musar sefer will appreciate the depth contained in the Vilna Gaon’s commentary. The story lover will relish the stories about the private thoughts and actions of gedolim like Rav Chatzkel, Rav Isser Zalman and Rav Shach. But the true beneficiary of this work is the one who can gain from all three approaches and their synthesis into one integrated perspective that personifies Rabbi Shlomo Hoffman.

Additionally, as in the Hebrew edition, the translator included an appendix listing all the sources quoted, as well as interviews with other students so that the reader can get a glimpse into how Rav Shlomo’s advice impacted them. Both contribute much to the overall experience of studying this work.

My only critique of this work is that it is but the first volume. I cannot wait to learn from Rav Shlomo (in Hebrew and in English) so many more topics that affect the human condition today. I’m sure his insights will continue to be far-reaching.

Rabbi Dr. Jonathan Schwartz is the rav of Congregation Adath Israel of the Jewish Educational Center (JEC) in Hillside/Elizabeth, New Jersey, and the clinical director of the Center for Anxiety Relief in Union, New Jersey.

5 2 votes
Article Rating
This article was featured in the Winter 2021 issue of Jewish Action.