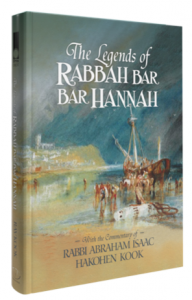 The Talmud and Midrash contain a number of outlandish tales. Neophytes may take such aggadot at face value, while detractors will point them out as untenable. More seasoned students, however, will recognize these as esoteric ideas encoded in fanciful metaphor. There are a number of reasons why our Sages might have chosen to encode such principles, such as to avoid incurring the wrath of the secular authorities or to limit advanced ideas to students possessing sufficient background to understand them. Over the centuries, subsequent Torah authorities have unveiled numerous layers of depth to such tales, with many more strata no doubt remaining to be explored. Among these aggadot, probably none are better known than Rabbi Yehoshua’s debates with the scholars of Athens in tractate Bechorot and the “Rabbah Bar Bar Hannah tales” that appear in tractate Bava Batra. The present volume represents the commentary of Rav Kook on these latter allegories, translated into English and annotated for the first time.

The Rabbah Bar Bar Hannah tales have been compared to the legends of Sinbad the sailor, in that, on the surface, they involve his travels to exotic locales and the phenomena he encountered there, such as a newborn antelope the size of a mountain, a fish so large its back is mistaken for an island, the smoldering crevasse where Korach and his followers were swallowed, and the place where Heaven and Earth meet. In some of these tales, Rabbah Bar Bar Hannah is traveling on a sea voyage with a crew of sailors, while in others he is escorted on a desert journey by an Arab guide. (There is some discussion as to how to understand tay’a, with Bezalel Naor opting to translate it as “Bedouin.”) In several of these tales, Rabbah Bar Bar Hannah describes his rabbinic colleagues criticizing his reaction to the phenomena he encounters, requiring still further thought beyond our initial interpretation of the metaphors.

The most well-known commentary on these lessons is probably that of the Vilna Gaon, so it’s interesting to see how this familiar interpretation differs from that of Rav Kook. In the Gaon’s explanation of these tales, for example, Hormin the son of Lilith—a trickster ultimately executed for his shenanigans—is a metaphor for hedonism, a lifestyle for which one will ultimately be judged. In Rav Kook’s interpretation, Hormin represents the drive for wealth and power; one is ultimately sentenced to death due to the refusal to give charity, which, as per Proverbs 10:2, has the potential to extend one’s life.

As a Kookian scholar, Naor has invaluable insights into Rav Kook’s thoughts, writings and process.

Most of Rav Kook’s interpretations of these tales involve the proper methods for the acquisition of Torah and for one’s spiritual perfection, with a healthy focus on kabbalistic concepts. I must confess, however, that the very first chapter nearly put me off the work. In the tale of the wave that threatened the ship, Rav Kook identified the threat as a metaphor for Christianity, for which he had a few harsh words. The theological chasm between Judaism and Christianity is indeed irreconcilable, but I imagine that few of us consider the Church to represent the existential threat to Judaism that it once did. I also question how much this interpretation reflects what Rabbah Bar Bar Hannah had in mind in telling this particular tale, but it certainly reflects the tale’s lesson when filtered through Rav Kook’s experience and interpreted for his audience. Rabbah Bar Bar Hannah might have had more reason to contend philosophically with Zoroastrianism than with Christianity, but such a contrast would no doubt have been less meaningful for Rav Kook’s audience a century ago. Despite understanding why he might take this approach, I did experience some initial discomfort and was relieved to discover that the work did not comprise a continuous stream of anti-Christian polemic. In fact, this particular theme does not reappear until a brief appendix involving “Rav Kook, the Messiah, and the Vatican.”

It is gratifying to see Rav Kook’s thoughts on these classic allegories brought to light in a format that makes clear both the original text and his commentary as rendered by Bezalel Naor, who has previously translated many of Rav Kook’s other writings. Let us not sell short, however, the contribution of Naor’s notes. As a Kookian scholar, Naor has invaluable insights into Rav Kook’s thoughts, writings and process. Consider, if you will, the lengthy footnote that appears on page 145. There Naor notes the curious phrase in Rav Kook’s manuscript, “yir’at harom ha’onesh,” transcribed in previous printings as “yirat ha’onesh” (fear of punishment). This phrase was redacted thus by earlier editors who assumed that Rav Kook started to write “yirat haRomemut” (awe of God’s sublimity), realized his error and truncated the mistaken word in progress. Naor, with his expertise in Rav Kook’s works and kabbalistic literature, is able to suggest an alternative. While he acknowledges that his hypothesis is not the most likely scenario, it does invoke a reference to the Zohar, lending it greater weight than mere speculation.

The analysis of the Rabbah Bar Bar Hannah tales actually only occupies about two-thirds of the volume, with the work also appearing in its original Hebrew starting from the back of the book. The rest of the pages are filled with a variety of appendices, one of which was alluded to earlier, and most of which have little direct bearing on Rabbah Bar Bar Hannah and his allegories. Rather, they shed further light onto the life and philosophies of Rav Kook, as well as on kabbalistic thought in general. Among these, one will find an eyewitness account of how Rav Kook exorcised a dybbuk; the Vilna Gaon’s thoughts on the three levels of the soul; a kabbalistic theory of personality; and Rav Kook’s critique of the Musar Movement. (Those who are the product of musar yeshivot might wonder, “What’s not to like?” While not a die-hard opponent, Rav Kook did raise some valid concerns with the nascent movement.) Each of these appendices is appended to in turn by Naor’s trademark endnotes, further illuminating each topic.

My interest in reading this book was to discover another approach to these most profound of Talmudic lessons. This goal was most certainly met, with additional benefit derived from the varied appendices. For those whose interests lie primarily in the works of Rav Kook and kabbalistic thought, however, this work may be even more indispensable.

Rabbi Jack Abramowitz is Torah content editor at the OU. He is the author of six books, including The Tzniyus Book and The Taryag Companion. His latest work, The God Book, is available from OU Press as well as on Amazon.

4 1 vote
Article Rating
This article was featured in the Winter 2020 issue of Jewish Action.