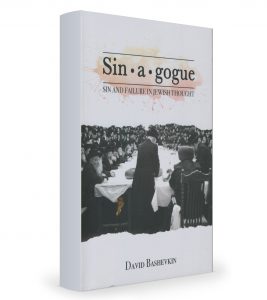 Rabbi David Bashevkin has written a great book. Building on his more sober Hebrew-language Berogez Racheim Tizkor (New York, 2015), Rabbi Bashevkin, NCSY director of education (and full disclosure: a member of the Jewish Action Editorial Committee) presents the reader with a series of powerful, dark-of-night meditations on sin and failure in Jewish thought that are wonderfully offset by his eccentric and irrepressible sense of humor. Prayerful yet not preachy, sophisticated yet unburdened by jargon, the book is a highly appealing guide to teshuvah for postmodern readers.

Weighing in at less than 200 pages, I thought Sin-a-gogue would be a quick, light read. I am familiar with the author through his presence on “frum Twitter,” where is known as the maven of the Jewish meme, deftly adding captions to iconic photographs to give them a tribal vibe. I expected the book to be as irreverently hilarious as his Internet persona, and from time to time it is, but I was unprepared for the profundity of this work. Even within the first few pages, Rabbi Bashevkin offers philosophical gems such as these: “Success in any endeavor is a winding, meandering journey with many false starts, unfulfilled promises, and public failures” (p. xv); “Crime, as immortalized by Dostoevsky, is measured by punishment. Sin, however, is measured by purpose” (8); “If someone decides to be totally passive, time will still continue making decisions for them. Failure naturally emerges from a passive approach to time” (10). This is a work to be savored and read multiple times.

The cover depicts Menahem Kahana’s iconic 2009 photograph of a Belz tisch. In the photograph, a sea of black and white Chassidim, grey-bearded and homogenous, turn their faces attentively to their rebbe. He sits with his back to the viewer, the devotion he inspires in his followers apparent. Under the table sits a young boy, resting his chin on his hand, gazing not at the rebbe but at us, disconnected and removed from the drama above. Ultimately, we identify not with the rebbe, and not with the anonymous Chassidim, but with this little boy, separate and alone, contemplating his place in the wider Jewish drama. The boy evokes the dynamic of our collective teshuvah of the High Holidays: surrounded and warmed by the presence of our community, we nevertheless approach God as individuals, existentially alone with our shortcomings. We have sinned, and we have failed, and as Elazar ben Durdaya proclaimed, the matter rests entirely on us alone.

In the work, Rabbi Bashevkin draws upon a broad range of intellectual sources, including traditional rabbinic texts, academic monographs, and contemporary news items. References to pop culture are scattered throughout, as well as studies of Jewish thought that one is unlikely to find on the bookshelves of the average beit midrash. These eclectic sources inform the character of the work and distinguish it from his earlier Hebrew-language study of sin and repentance in rabbinic thought.  The author is especially strong when discussing the Chassidism of Izbica-Radzyn and isolated concepts from the work of Rabbi Yitzchak Hutner. Through Rabbi Bashevkin’s work I learned that the famous Chatam Sofer advocated the observance of a personal day of teshuvah, an individualized Yom Kippur of “fasting and repentance with tears and grief as well as confession and regret,” which would mark the anniversary of either a great personal failure or the day one overcame temptation. Like the custom of a seudat hoda’ah upon surviving a dangerous experience, such as emergency surgery or a car crash, the Chatam Sofer’s creative approach to teshuvah has added depth to my own, and I am grateful to Rabbi Bashevkin for sharing it with us.

Rabbi Bashevkin oscillates between tradition and modernity with ease, mining the wisdom of the ancients for nuggets that today’s audience can grasp. Particularly poignant is his presentation of Rabbi Moshe Feinstein’s little-known responsa to students struggling with issues of marital fidelity and sexual orientation. Writing to a young man struggling with a temptation that is unequivocally forbidden by the Torah, Rabbi Feinstein responded first with “I did not find a halachic question in your letter.” Nevertheless, he continues to write and offer pragmatic suggestions for teshuvah, uniquely shaped for the circumstances of this young man, “to provide encouragement not to become depressed and become mired in something which requires strengthening from the strategies of the evil inclination.”

Rabbi Bashevkin divides his book into three parts: The Nature of Sin, Case Studies in Sin and Failure, and Responses to Sin and Failure. The first is theoretical in nature, and I anticipated a much more pedestrian review of the existing literature, but the author’s deft weaving of modern positive psychology into rabbinic thought prompted me to bring his ideas to my Shabbat table. The section on Case Studies is especially fascinating: Rabbi Bashevkin draws on a variety of brain-teaser questions in teshuvah, such as the 1962 case of Brother Daniel, who was refused citizenship despite Israel’s Right of Return Law because of his conversion to Catholicism, a case that tested the limits of faith and apostasy within the modern Jewish world. Rabbi Bashevkin also explores the sad but fascinating phenomenon of “Rabbi’s Son Syndrome: Why Religious Commitment Can Lead to Religious Failure.” The third section contains two powerful essays, both of which deal with the “response” that is embedded in the very meaning of the word teshuvah.

All of this is not to say that Sin-a-gogue is a perfect work. A stronger editorial hand could have restrained some of Rabbi Bashevkin’s overreach, which begins with the unfortunate title, a groaner of a pun that does not reflect well on the majesty of his topic. Cheesy neologisms stain the text here and there, as if a meme could somehow be translated into text, like the subheader “CoerSIN: The Category of Oness.” These verbal tics, absent from his Hebrew writings, are probably hilarious when presented orally (or on Twitter), but they are less successful in print. Hopefully many of these issues might be addressed in a second edition, or at least in Rabbi Bashevkin’s next book, which I anticipate eagerly.

Dr. Henry Abramson is a specialist in Jewish history and thought, serving as dean of Touro’s Lander College of Arts and Sciences in Brooklyn, New York. He presents the “Jewish History in Daf Yomi” podcast, part of the OU Daf Yomi Initiative.