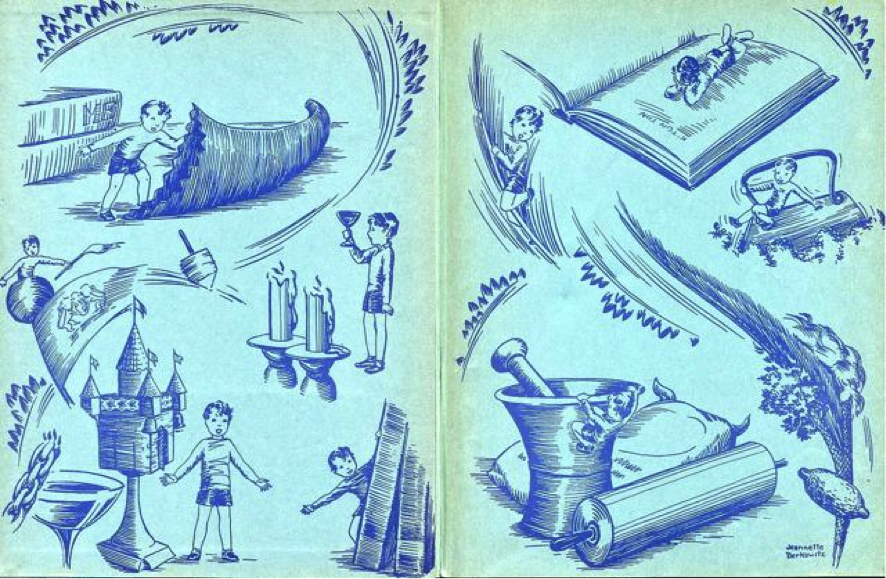 The inside front-and-back covers from The Adventures of K’tonton, first published in 1935 and drawn by Jeannette Berkowitz. Courtesy of Ariel S. Winter

Summer vacation provides freedom from schoolwork, but making time for your children to read is just as important! While there’s a wealth of Jewish reading material for children today, we shouldn’t forget about some older Jewish classics that entertain just as well now as they did in the past.

Editor’s Note: While many of the K’tonton books are out of print, used editions of select stories including The Adventures of K’tonton, The Best of K’tonton, K’tonton’s Sukkot Adventure are available through third-party sellers on Amazon.com and AbeBooks.com. 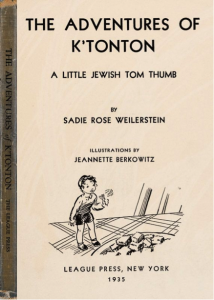 An early version of The Adventures of K’tonton, first published in 1935. Courtesy of Ariel S. Winter

Today, many of us may fondly recall the character of K’tonton and his many escapades—that endearing little boy created by Sadie Rose Weilerstein, who was partially inspired by the small-yet-wily fairy tale character of Tom Thumb. The K’tonton series was first penned by Weilerstein in the 1930’s, and appeared in magazine-form. The last well-known compilation of the stories was republished and remarketed by the Jewish Publication Society in 1980 under the title of The Best of K’tonton: The Greatest Adventures in the Life of the Jewish Thumbling, K’tonton. While the title is a mouthful, this compilation still manages to evoke the same delight for a newer generation, just as when the stories first appeared in the 1930’s. 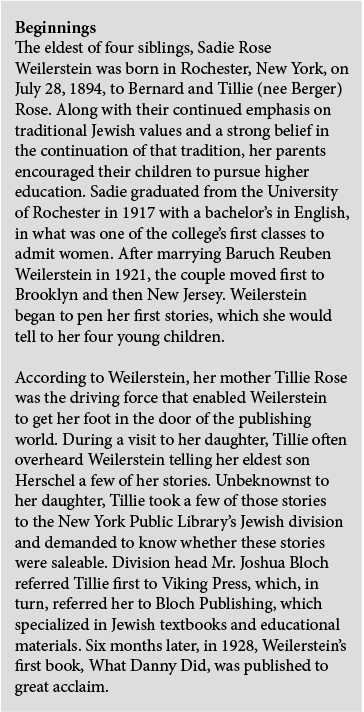 The stories of K’tonton grew out a question posed to Weilerstein by her then five-year-old son. One evening, her husband was reading aloud a story by S.Y. Agnon about a tiny Medieval Rabbi named Gadiel Hatinok, who saved his community from a blood libel. Not wanting to scare her son, Weilerstein told him that they were speaking about a small boy, quite a lot like him, except that he was as small as a thumb and that he “took a ride on a chopping knife and wished he hadn’t.”1  Her husband gave the little boy of her imaginings the name “K’tonton” meaning, quite appropriately, “very small” in Hebrew—and from there, the stories about that little Jewish boy took off. Indeed, in her preface to The Adventures of K’tonton, published in 1964, the fourteenth printing of the book, she says that her little hero wishes to “say Shalom to the many Thumblings who have preceded him, Tom Thumb, Top-o-my-Thumb, the exquisite Thumbelina, his fellow Hebrews, Fingerel of the Babache Tale and Rabbi Gadiel ha-Tinok.”

K’tonton may be a beautiful amalgam of the fairy-tale stories that came before him, in all of their varying cultural forms, but he is most clearly a product of the unique Jewish mind that culled her sources heavily from the Torah and from the integral, everyday Jewish outlook that so permeates K’tonton’s world, and ours, as well. Although K’tonton’s story exists very firmly in the American-Jewish sphere of the 1930’s and onwards, a sense of the fairy tale magic combines with the Biblical, throughout the narrative. 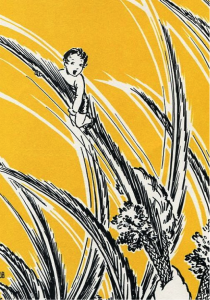 K’tonton going for a ride on the Lulav in the story, “How K’tonton Went to Synagogue and Swung on a Lulav.” Illustration by Jeannette Berkowitz, 1935. Courtesy of Ariel S. Winter

“Once upon a time,” opens the Adventures of K’tonton, where we meet his future parents, a childless couple desperately longing for a baby of their own. One Sukkot, K’tonton’s mother is praying in shul and an elderly lady approaches her and asks why she is so sad and is praying so hard. Upon learning the reason for her anguish, the old woman tells K’tonton’s mother that on the last day of Sukkot, she should bite off the end of her husband’s etrog. Then, she says, she will surely have a child. That this comes true for the mother speaks to the almost magical—and one might even say the miraculous—aspect of these stories.

Perhaps what made Weilerstein’s books so unique is that they not only fulfilled a need in the Jewish community of that time for more Jewish children’s content, but they also emphasized the importance of maintaining a thriving Jewish culture and religion. Being an American, Weilerstein seems to say, doesn’t impede the practice of being Jewish.

Weilerstein’s—and by proxy, K’tonton’s—Judaism in the books is joyful, fulfilling and beautiful. For example, in the first chapter of The Adventures of K’tonton when K’tonton is just a baby, we read that “She fed him milk with honey in it—ISRAEL honey. ‘The Torah is like milk and honey,’ she said. ‘I will feed you milk and honey now, and when you grow older you will feed on Torah.’”2 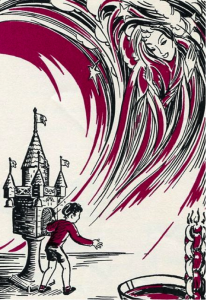 K’tonton says goodbye to the Sabbath Queen during “the Havdalah service” in the story, “How K’tonton Plans a Palace for the Sabbath Queen.” Illustration by Jeannette Berkowitz, 1935. Courtesy of Ariel S. Winter

Although some stories are certainly not as sweet—and some are actually scary, such as when K’tonton “goes for a ride” on his mother’s chopping knife when she is making gefilte fish or when he spins down the street on a dreidel—things always turn out right in the end. The stories, while containing a message, manage to avoid an overly-moralizing tone or a tone of displeasure towards a child’s natural curiosity and inclinations. K’tonton is, for all intents and purposes, still a little boy who make mistakes. He isn’t perfect, and the books show us how even mistakes and imperfections can be transformed for the good through this joyful approach towards Judaism. This positive approach is thus conveyed not through harsh strictures, but through the author’s respect for every Jews’ own level of observance, as stated in her Preface.

K’tonton’s stories and Weilerstein’s other children’s books were some of the first Jewish children’s books to be written in English. K’tonton’s adventures strike a harmonious balance between a child who is small in size and age, but who is also capable of operatively transforming his own life. Perhaps one facet of what makes K’tonton so compelling is that despite his miraculously diminutive figure, he grows, learns, and goes through experiences via his own free will.

Through the character of K’tonton, Sadie Rose Weilerstein was instrumental in turning Jewish children’s books of the time on their head. She ensured that American Jewish children of the time and in the future would have a hero that they could call their own, one whose stories contained a love of Judaism. Her stories continue to entertain and inspire us, thanks to that inquisitive little boy that Weilerstein and her family—and ultimately the world—would come to know as K’tonton.

Bracha K. Sharp is a freelance writer and poet. Her education in English literature and psychology informs her writing in both her poetry and her article-writing. She was a contributor to the JLBWC newspaper and her poems have appeared in the APR and elsewhere. Her Jewish children’s picture-book is forthcoming, from Mosaica Press. All of her writing is available on her website, brachaksharp.com