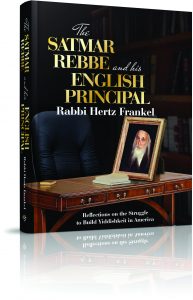 The last forty years have witnessed a veritable revolution in the world of English-language books designed for the Orthodox community. From ArtScroll to OU Press and from Feldheim to the Israel Bookshop, we enjoy a plethora of well-written books examining every aspect of Orthodox Jewish theology and role models.

Despite the abundance of Jewish books, you will be hard-pressed to find a single book in English devoted to the founder of the fastest-growing and quite possibly the largest single American Jewish group: Rabbi Yoel Teitelbaum and the Satmar Jewish community. Satmar has 32,000 students enrolled in New York area yeshivot. Over one-third of all first graders in Jewish schools in the metropolitan New York area attend Satmar schools. And yet this huge segment of our community is, for the most part, not reflected on our bookshelves or in our bookstores.

There are cogent explanations for this curious anomaly. The walls between Satmar and the rest of the Jewish community are hardly a coincidence. They were designed by the Rebbe when he arrived on these shores in 1947 in a deliberate effort to ensure the purity of his tiny band of Holocaust survivors. These walls have been reinforced through the years by barriers of language and culture and, even more so, by the rest of the Orthodox community’s opposition to the Rebbe’s extremely strong stance against the Zionist movement and the creation and continued existence of the “Zionist entity.” The Rebbe’s nuanced refusal to join together with Israel’s non-Jewish enemies hardly placated those who only heard the similarities of his rhetoric.

For over half a century Rabbi Hertz Frankel, a college-educated Agudist product of Yeshiva Torah Vodaath, has been the bridge between the English-speaking contemporary Orthodox world and the rapidly expanding, increasingly insular, self-sustained world of Satmar. His memoir, The Satmar Rebbe and His English Principal, provides a unique look at what is, for most of us, a largely uncharted world.

Rabbi Frankel was appointed the “goyish principal” (i.e., secular studies principal) of Satmar’s fledgling Bais Rochel school system in 1959. He is still there. (To put things in perspective, Dwight D. Eisenhower was president of the United States in 1959.)

It was not, and is not, an easy job. The textbooks are heavily censored. The curriculum is rigorously structured. And for nigh unto six decades Rabbi Frankel has persevered and succeeded in educating generations of young women (who are now the great-grandmothers, grandmothers and mothers of his current students).1

I learned a lot from this book. It is different. It does not reflect the Satmar Rebbe’s wondrous quip that “the stories in the biographies of gedolim are written first and then they decide whom to attribute them to.” This is a well-written book, loaded with dozens of “inside Satmar” secrets. (Who would have guessed that the Rebbe was against uniforms for Bais Yaakov girls because then “they think they can be less tzenius at home?”) 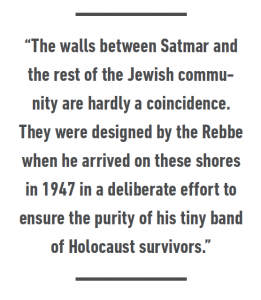 To read The Satmar Rebbe and His English Principal is to relive long-forgotten communal history—such as “Eyfoe Yossele?”2 and “Stop the Autopsies”3—and share a rare look into historic moments, including the Rebbe’s and the Rebbetzin’s role in forging a vital living legacy that impacts so many Jews around the world in so many ways.

I particularly enjoyed Rabbi Frankel’s many anecdotes about the Satmar Rebbe’s interactions with other gedolei Yisrael, which for some reason are rarely found in the latter’s biographies. My favorite moment is when the Satmar Rebbe invited Rabbi Moshe Feinstein, Rabbi Yitzchok Hutner, Rabbi Yaakov Kamenetsky and Rabbi Yaakov Yitzchok Ruderman to an urgent secret December meeting in Williamsburg, and took the unusual step of davening Minchah at 1:30 pm, before they came, to accommodate his guests. When the roshei yeshivah arrived at 4 pm, Rabbi Kamenetsky promptly suggested that they daven Minchah before the meeting.

“The Rebbe smiled and announced (in Yiddish), ‘I already davened.’ Reb Yaakov [Kamenetsky] responded, ‘This whole gathering today is kedai [worthwhile], just to have the Satmar Rebbe daven Mincha one time in his life in a proper zman.’”

This book is choc-a-bloc full of such delicious nuggets. It is that rare book that informs and entertains at the same time. This reviewer, however, is left with two qualms.

Firstly, Rabbi Frankel is a bit too modest about the historic role he played in so many of the events he discusses. In particular, he fails to highlight the vital part he played in the creation and workings of the Presidential Commission to protect overseas cemeteries. This story and many others will have to await Rabbi Frankel’s next book.

Secondly, there can be no denial of the Satmar Rebbe’s historic impact on world Jewry. Many of the positions he first championed have become normative in much of the Orthodox world. His influence is reflected in the increasing prevalence of gender separation at communal and public events, the virtual disappearance of television sets from “right-of-center” Orthodox homes, as well as in the insistence of separate “kosher textbooks” in so many of our day schools and high schools. These were all positions first articulated and championed by the Satmar Rebbe. But the degree to which Rabbi Frankel presents him as the seminal figure in post-war North American Orthodoxy is a bit off-setting for this Yeshiva College graduate from a Lubavitcher family who has spent his adult life working at Touro College while volunteering for NCSY and the Orthodox Union.

The existence of the rest of the Orthodox world is only hinted to in the book to the degree that they interfaced (several of the great “Lithuanian” roshei yeshivah) or did not interface (the Lubavitcher Rebbe, Rabbi Joseph B. Soloveitchik, Yeshiva University and the Orthodox Union) with the Satmar Rebbe. But in fairness, it should be noted that I have perused the popular biographies of the aforementioned giants as well as the histories of the institutions, and can report that they hardly ever mention the Satmar Rebbe. Which is exactly as he would have wanted it to be.

1. There have recently been a number of articles, books and even legal challenges by graduates of the Satmar school system deploring the limited nature of the secular education received by girls in those schools (not to mention the virtual absence of any secular education in the boys’ schools). If anything, these criticisms highlight the challenges that Rabbi Frankel has faced through the years from those who were opposed to any interaction with the “goyish world.”
2. Yossele Schumacher was kidnapped in 1960 by Neturei Karta activists at the request of his religious grandparents to prevent his court-ordered return to his secular parents. He was smuggled to the United States and lived in the Satmar community of Williamsburg until he was discovered by the FBI and Mossad (led by Isser Harel, who had previously overseen the capture of Adolph Eichmann). This entire incident led to enormous tension between the Chassidic and secular Israeli communities, and “Eyfoe Yossele” became a rallying cry for those who demanded his return to his parents.
3. Autopsies were allegedly routinely conducted after any death in many Israeli hospitals until the Begin government curtailed this practice in 1977. This was a major flashpoint between the religious and secular communities during the first three decades of Israeli independence.

Dr. David Luchins serves as chair of the Political Science Department of Touro College and has been active in the Orthodox Union since he joined NCSY in junior high.

4 1 vote
Article Rating
This article was featured in the Spring 2017 issue of Jewish Action.