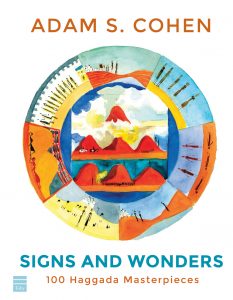 The very first sentence in Cohen’s introduction to this work tells us that “No book in Jewish history has been illustrated more often than the haggada.” He then goes on to deliver a representative sample of such works that is not only thorough, it is thoroughly enjoyable.

The very first work examined is the famous “Birds Head Haggada,” believed to originate from Mainz circa 1300. We are immediately treated to a tangential look at Koren’s 2006 adaptation of this Medieval manuscript, which is in the form of a pop-up book. Right away we learn to expect the unexpected: this collection is going to be scholarly but far from stodgy.

The art choices of haggadot throughout history reflect not only traditional Jewish thought but also the contemporary circumstances and the attitudes of their artists and intended audiences. There is also a surprising amount of whimsy. A running gag throughout haggada illustration appears to have husbands equating their wives with the maror, the bitter herbs eaten at the Seder. (On at least one occasion, the wife gets the last word with a well-placed rejoinder.) There is also word play. For example a 1460 German haggada depicts a hare hunt on the page of Kadesh – an odd choice given that the hare is not a kosher animal! As it turns out, the Hebrew acronym “yaknehaz,” which represents the order of the brachot to be recited, is a near homophone for “jag den Has” – “hunt the hare.” (Might the illustration have been intended as a mnemonic for the mnemonic?)

It was a pleasant surprise to see included the haggada that my father received from my maternal grandfather, which he used for five decades. This volume, the 1949 Forst Haggada, was released in the immediate aftermath of the founding of the State of Israel. As such, the colorful tome features proud and strong figures, including Abraham, David, Yael, Judah Maccabee and some rugged kibbutzniks. This stands in stark contrast to such works as the black-and-white 1946 Munich Haggada with its images of Nazis, swastikas and crematoria.

Even the venerable and ubiquitous Maxwell House Haggada gets its moment in the sun!

While thorough, the work is not exhaustive. For example, while modern artist Yaacov Agam’s haggada is represented, Marc Chagall’s is not. (This is not a grievous flaw per se; it would be unreasonable to expect that absolutely every haggada could possibly be included. One should merely manage expectations in this matter.)

Signs and Wonders is lushly illustrated, engaging and informative. That it would make the perfect gift for haggada enthusiasts practically goes without saying. It would likely be equally appreciated by fans of art history and connoisseurs of Judaica in general. Placed on your coffee table, it would stand to be heavily perused year-round, while on Passover night, it would be difficult to resist comparing how the different parts of the Seder were depicted through the ages.