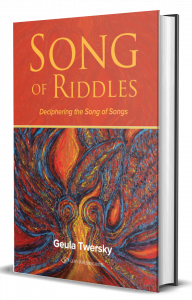 It has been forty-five years since a then-fledgling and little-known publishing house came out with Shir Hashirim: the Song of Songs. Fresh off the success of its landmark The Megillah: The Book of Esther, Shir Hashirim continued ArtScroll’s introductory series of innovative approaches to the five Megillot including “a commentary anthologized from Talmudic, Midrashic, and Rabbinic sources.” What made Shir Hashirim unique—and revolutionary—was what the publisher quite correctly touted as “the first English translation faithful to the allegory that is the Song’s authentic meaning.” Based upon Rashi’s understanding that the emblematic meaning behind the text is a description of the love between G-d and Israel, the atypical “translation” became normative, especially once ArtScroll featured it in the back of its 1993 Stone Chumash, which, with new fonts and an exhaustive modern English commentary, soon became the standard Pentateuch used in most Orthodox Jewish congregations across the English-speaking world.

ArtScroll’s innovation in translating the Song of Songs, while making the meaning of the text more accessible and conforming to a religiously conservative worldview, still left those looking for the simple meaning of the text disappointed. Far removed from Biblical prose or even poetry, the Song’s lyrical conversations between two lovers—describing their pursuit of each other through vineyards and fields of blossoming flowers—seem enigmatic and unlike any other book in Tanach. Confusion about its meaning is ancient; it led several Tannaitic sages to question its very canonicity. Indeed, Rashi himself underscored the inherent complexities of understanding the text on the simplest level. Quoting Sanhedrin 34a, he introduces his commentary on the book, noting that though “one text has several meanings, in the end, you cannot have a text removed from its simple and implied meaning.” Great sages and scholars—both Jewish and non-Jewish—have produced over the millennia a rich literature of attempted explanations as they grappled with the conundrums posed by the Song’s beautiful yet puzzling words.

Following in this tradition, Geula Twersky’s Song of Riddles: Deciphering the Song of Songs makes its own attempt to unravel the mysteries of the book. Using a painstaking, holistic method, Twersky approaches the Song as a sort of literary onion, the layers of which she sees as riddles to be solved to reveal understandings that are startlingly enchanting and profound. Though with its copious footnotes and scholarly references, Songs of Riddles at times reads like an academic dissertation, Twersky’s straightforward writing style engages the reader in elucidating the differences between allegory, metaphor and riddles, and then proceeds to attack each problem individually with thorough and thought-provoking analysis, building upon the ideas and explanations of generations of commentators. What emerges is an ingenious and novel understanding of the text and its panoply of motifs that both highlights the multiple facets of the Song and uncovers a breathtaking pastiche of multidimensional descriptions, which together ratify Rabbi Akiva’s comment in the Mishnah: “For the whole world is not as worthy as the day on which the Song of Songs was given to Israel; for all the writings are holy but the Song of Songs is the holy of holies” (Yadayim 3:5).

Twersky’s thesis is quite radical: the lovers who both revel in their courtship and despair at their separation are intricate, parabolic descriptions of the keruvim, cherubim, the enigmatic, unearthly winged beings who directly attend to G-d. Unafraid to tackle a subject as mysterious and elusive as angels (upon which tradition states one is forbidden to contemplate), Twersky reverently understands the Song to be referring to very specific cherubim, the two whose representation adorned the lid of the Ark of the Covenant—between which G-d Himself communicated with Moses in the desert—and the array of images depicting cherubim that Solomon fashioned throughout the Temple, including the much larger twin cherubim that adorned the Holy of Holies. Twersky posits that King Solomon composed the Song to dedicate and commemorate the culmination of Israel’s national birth, begun with the Exodus and completed not only with the completion of the Temple in Jerusalem, but with the resplendent and elaborate ceremony that placed the Ark into its permanent home within it, as described in I Kings 8:6-7:

The priests brought the Ark of the L-rd’s Covenant to its place underneath the wings of the cherubim, in the Shrine of the House, in the Holy of Holies; for the cherubim had their wings spread out over the place of the Ark, so that the cherubim shielded the Ark and its poles from above.

According to Twersky, the interplay of the lovers in the Song reflects the mystical interaction between the two sets of cherubim in their permanent abode within the Temple. As Twersky methodically proposes solutions to the riddles the text presents, a larger picture of the majesty and dynamism of the cherubim comes into focus. Two examples highlight this approach.

Regarding Song 7:5, the author contemplates the bizarre image in the description of the Shulamit, the female lover, whose “nose is like the tower of Lebanon looking towards Damascus,” not exactly a quality attributed to beauty. Through a series of interesting lexicological connections—including understanding “Damascus” to mean both the direction in which the nose is pointed as well as damask fabric that covers a footstool—Twersky arrives at a solution that identifies the Shulamit as Solomon’s monumental cherubim that were facing and towering over G-d’s footstool—the Ark.

Twersky likewise tackles the incongruity of Song 4:5, which compares the Shulamit’s bosom to “twin fawns of a gazelle that browse among the lilies,” when in nature, most antelopes are not known to graze among lilies. Drawing on the motion in this descriptor, Twersky refers to the alternating carvings of cherubim, palm trees and open flowers—which, based on the floral decorations of the Temple pillars and laver, she surmises were lilies—that adorned the interior of the Temple as described in I Kings 6. The riddle evokes the wall carvings of the cherubim, overlaid in polished gold, which, like a mirror, reflected the Ark with its own cherubim as it moved past the images of the lilies to its resting place in the Holy of Holies.

Throughout Song of Riddles, the author makes a point of underscoring that her ideas are just hypothetical, yet two excursuses Twersky includes at the end make her thesis even more convincing. In one, the author takes the principles and ideas she has developed throughout her study of the Song and uses them to point to echoes from the Balaam narrative in Numbers 24, and through Balaam’s interaction with a cherub, to the cherubim in the Garden of Eden (Genesis 3:24), the only other references to such creatures in the Torah. In the other, Twersky demonstrates how the subtext of Moses’ parting blessings in Deuteronomy 33,  with their focus on the theme of G-d’s eternal love of Israel, is an allusion to the nation assuming qualities of cherubim.

What Twersky’s scholarly, erudite and clever analysis accomplishes is to place the Song into a specific historical context, which highlights the highly artistic, spiritual and homiletical genius of Solomon. While his father David was, as the late Rabbi Lord Jonathan Sacks, zt”l put it, “the greatest religious poet in all of history,” Solomon exhibited a lyricism through the Song that illustrates an almost otherworldly complexity and a profound sense of history through a need to eternalize a specific moment, one of extraordinary importance in the evolution of the Jewish people. Perhaps this sense of living through history is one of the many reasons the Song, recalling the culmination of the nation’s covenantal relationship with G-d through the placement of the Ark in the Temple, is read on Passover, the holiday on which the Jewish people effectively dissolve the centuries to internalize the lessons and emotions of their national birth.

Interestingly, the Song is perhaps not the only instance of Solomon’s sense of future resonance. Solomon bore witness to another singularly extraordinary event, which he similarly marked with a literary masterpiece. The last commandment in the Torah, Hakhel is the septennial gathering of all Israelites in Jerusalem during the Sukkot holiday following the sabbatical year to hear the king (the gatherer or kohelet) read and expound on parts of Deuteronomy as described in chapter 31 of that book. With the completion of the Temple, Hakhel began to be observed as commanded. Though various sources conflict on the precise dating of the dedication of the Temple within the cycle of sabbatical and jubilee years, at some point over the span of his forty-year reign, Solomon was the first kohelet to preside over the first semi-centennial Jubilee Hakhel. With its striking thematic similarities to Deuteronomy, Ecclesiastes—Solomon’s other attributed Biblical scroll—attests to what was the only Jubilee Hakhel celebrated with all the Tribes of Israel extant, in the land, and united under a single monarch with the Temple standing and the Ark at its core. As the foremost sage of his time, Solomon wrote the Song to commemorate the climax of the dedication of the Temple and likewise composed Ecclesiastes as his homily as kohelet for that uniquely seminal event.*

Twersky’s valuable contribution to the overall comprehension of the text is impressive and introduces an innovative approach and satisfying context in which to understand—or at least understand how to understand—its simple meaning. Moreover, seeing past its enigmas gives the Song greater resonance and lends appreciation to how such a beautiful and esoteric book depicting the eternal love story between G-d and Israel became the focus—through its weekly recitation on Friday nights and its yearly recitation on Passover—of Jewish longing throughout centuries of despair and dispersion.

* The late rosh yeshivah of Yeshivat Hakotel, Rabbi Yeshayahu Hadari, expounded on this idea in a lengthy discourse on Hoshanah Rabbah, September 26, 1994.

Daniel Renna is a foreign service officer and currently a political officer at the US embassy in Abuja, Nigeria. He has served in various capacities as a diplomat at US embassies in Slovakia, the Gambia, Armenia, Botswana, the Democratic Republic of the Congo, and at the State Department in Washington, DC.