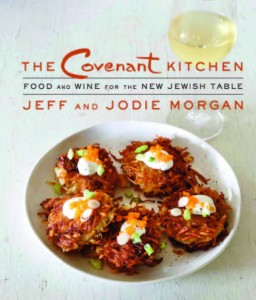 Opening The Covenant Kitchen: Food and Wine for the New Jewish Table feels like an invitation into the sun-drenched, casually elegant world of authors Jeff and Jodie Morgan, a world in which their freshly picked garden produce, drizzled with extra-virgin olive oil and accompanied by a thoughtfully chosen bottle of wine, takes pride of place on the rustic dining room table.

Jeff and Jodie themselves are warm, welcoming people with the joie de vivre of those who have found their bliss. In their case, that means the production of Covenant Wines, some of the finest kosher wines on the market.

As a young man, Jeff left a budding musical career in France to work in the vineyards, later moving to vineyard work on Long Island, New York, where he began contributing wine articles to the New York Times. This led to an invitation to do a feature on kosher for Pesach wines for Wine Spectator, which segued into two decades of work as a wine writer, editor and cookbook author.

But about eight years into it, Jeff hankered to get back into the actual winemaking process. An encounter with Eli Ben Zaken and his high-end Israeli Castel wines inspired him to try his hand at making “the best kosher wine in 5,000 years” using California vintages. His first attempt, a 2003 cabernet, received rave reviews, and since then Covenant has expanded and thrived.

The kosher wine business also introduced Jeff and Jodie to Orthodox Judaism. Through their friendship with the Herzog family, whom Jeff had met through wine journalism, and a local Chabad shaliach, the two set up a kosher kitchen and began taking small steps toward observance. It was only natural that their next cookbook would be a kosher one.

While there are scads of kosher cookbooks on the market, to date there hasn’t been one like The Covenant Kitchen, which expertly pairs sophisticated recipes with sophisticated wines. The book (full disclosure: it’s copublished by OU Press, the publishing arm of the Orthodox Union) begins with an introduction to wine and kosher winemaking, a sort of noncondescending Kosher Wine for Dummies. The Morgans explain the rationale for such enological protocols as aerating the wine, swirling it in the glass and pairing the right glass to the wine for maximum flavor. They also discuss identifying unlikely flavor notes such as leather, tobacco and chocolate, and the challenges of producing a premium kosher wine. The tone is conversational and unpretentious. The authors acknowledge that the price of wine, like real estate, is often based as much on perception as on inherent value, and concede that one’s personal preference is more important than what “connoisseurs” deem to be good.

The wine section is followed by about 100 recipes organized by category (appetizers, soups, meats, et cetera), with sidebars discussing various aspects of kashrut or cooking. Each recipe includes a suggested wine pairing and friendly, sensible cooking tips. Jeff and Jodie may be food and wine sophisticates, but they’re also practical. When canned beans will serve as well as soaked and boiled beans, they’ll say as much; they suggest not using your best wines for cooking.

The Morgans lived in Provence, Italy, for extended periods of time, and as a result, ingredients like olives, lemons, garbanzos, lavender, rosemary and thyme appear repeatedly in this book. In general, their approach draws most heavily from the Mediterranean and California Chez Panisse philosophy of cooking: use fresh seasonal ingredients, bringing out their flavors with the judicious addition of herbs, olive oil, citrus, et cetera. The result is unfussy, yet naturally opulent food.

The recipes are also informed by the Morgans’ extensive travel and food experiences. The resulting cultural cross-fertilization is evident in recipes like Israeli shakshuka, which edges toward huevos rancheros with the addition of avocado, beans and cheese. Many tempting Asian and Italian dishes are included. And while a kosher cookbook simply can’t leave out Jewish standards like gefilte fish, latkes and cholent, in the Morgans’ urbane hands they are tweaked into fish quenelles with braised leeks, latkes with fish roe and a cassoulet-style “cowboy cholent” that calls for lamb sausage and red wine (I somehow doubt the cowboys cook it that way!).

While most ingredients are easily obtainable, readers may find some of them unfamiliar and hard to source, even for those living in kosher hubs like Brooklyn. Grains like freekeh, Wehani rice and black rice are a refreshing change from Uncle Ben’s, but I could only find the last one on a scouting trip to Pomegranate, a gourmet supermarket in Brooklyn. I also hunted unsuccessfully for fresh sardines, Hawaiian opah, masago (a fish roe) and kosher lamb sausage. The Morgans have anticipated this, however, and offer substitutions such as brown rice for freekeh, salmon roe for masago and tuna, salmon or halibut for opah. The lamb sausage is optional. The authors also have the advantage of their own garden for produce, whereas I’d have to go to a farmers’ market to find fresh butter beans and squash flowers (which they intriguingly stuff with ricotta and fry).

The food styling and photography make this volume a gourmet feast for the eyes as well as the palate, depicting not only food but the Morgans’ lush vineyards, garden and home. The effect is to leave you with the yen to drop in on Jeff and Jodie to bask in the California sunshine and share their food, wine and easy camaraderie. But barring a trip to California, readers can buy the book and try to reproduce the experience at home, bringing some of that sunshine and vibrant flavor into their own dining rooms.

A longtime Jewish Action contributor, Barbara Bensoussan authored a column on Sephardic food for the Hamodia and writes a food column for Mishpacha. Her latest book is a food memoir entitled The Well-Spiced Life, describing her discovery of Sephardic food and faith.