When we look back and survey the evolution of Holocaust studies as an independent academic discipline, one that engages countless scholars and students and is supported by dozens of academic centers and institutions in America and around the world, it is hard to imagine the field’s humble beginnings. Today, Holocaust studies is a multidisciplinary field attracting the attention of scholars from all over the world who explore the Shoah from infinite angles and perspectives. It is easy to forget how long it took for some of the Holocaust’s more neglected aspects to come under the spotlight and scrutiny of the field’s brightest minds. 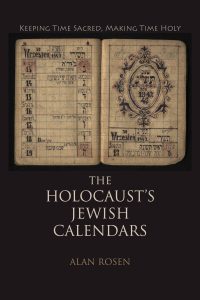 In its humble beginnings, academic focus was placed on the German bureaucratic system, as in Raul Hilberg’s pioneering work in the field, The Destruction of the European Jews (which viewed the Jews as a uniform, silent mass), or strictly on the heroes of the Warsaw Ghetto resistance organization (as practiced in the official memory propagated by the young State of Israel). Little room was available for the exposition of the Jewish daily struggles in the ghettos and camps. It would also take decades for the term “resistance” to denote more than just the bearing of arms against the Nazis. When cultural and spiritual resistance finally did appear on the scene of Holocaust studies, it normally referred to activities pertaining to the secular sphere—archival works, theater, literary and musical productions, or scholarly works—leaving the Jewish traditional practice and forms of resistance by the wayside.

While not the first work to do justice to this sense of tradition’s neglect, Dr. Alan Rosen’s recent book The Holocaust’s Jewish Calendars is a masterpiece that helps us grasp one of the most fundamental traditional modes of spiritual resistance—the tracking of Jewish time in the ghettos, camps and in hiding. Furthermore, the book introduces us to the Holocaust’s unsung heroes—Jews interned in Auschwitz, Bergen Belsen, Westerbork, the Lodz Ghetto and Theresienstadt. These figures, while trapped, starved to death and doomed, with no prospects for armed struggle or rescue, could still uphold their dignity and live a fuller Jewish life by aligning their harsh routines with Jewish time’s profane and sacred dimensions.

Dr. Rosen’s book is an extremely detailed survey of close to three dozen known calendars produced during the Holocaust. He explores every calendar’s shape and production process in a detailed fashion, scrutinizing both content and structure. While offering this punctual analysis, the book is an extremely engaging, colorful and well-written work that both scholars and laypeople will find fascinating. It makes a lasting contribution to the subject of Holocaust-era spiritual resistance that cannot be exaggerated.

Anyone wondering what the Holocaust’s Jewish calendars look like, expecting the standard booklet we are all used to, divided into twelve panels with the Jewish and Gregorian dates appearing side by side (this is how I remember the printed calendars of my childhood in Israel, hanging in my parent’s kitchen), will be surprised to realize the diversity of calendars culled by Dr. Rosen. The range of Jewish time-tracking products surveyed in the book stretches from a knot in a dress, made in order to help a Jewish woman determine the occurrence of Shabbat, to extremely elaborate calendars indicating the proper observance time for Shabbat and the Torah parashah read that week, as well as the holidays and fast days, all based on calculations done in complete isolation from the outside world. Similarly, Dr. Rosen introduces us to a vast range of calendars, from ones produced when finding something to write with and to write on was extremely challenging, all the way to beautifully calligraphed and color-coded calendars, like the one created, for instance, by the Neustadt chasid Rabbi Shlomo Yosef Schneir for the years 5703 (1942-1943) and 5804 (1943-1944), while hiding in the house of his former Polish non-Jewish employee, together with his wife and four children. Through this panoramic exploration of the book’s subject matter, the Jewish calendars of the Holocaust emerge as far from the one-size-fits-all image of a basic, uniform and standard booklet of great utility—but only in a given moment, before the passage of time consigns it to both irrelevance and oblivion.

The Holocaust’s Jewish Calendars is a masterpiece that helps us grasp one of the most fundamental traditional modes of spiritual resistance—the tracking of Jewish time in the ghettos, camps and in hiding.

This is, unfortunately, the way Holocaust calendars were perceived for decades. As Dr. Rosen points out, this common attitude to World War II-era calendars explains the little interest that they have hitherto evinced among both curators and scholars. It is Dr. Rosen’s mission to undo this sense of indifference to the Holocaust Jewish calendar and its common disregard in both public memory and scholarship. The author fulfills this mission by providing us with plenty of examples, illustrating how a Jewish calendar is far more than a time tracking device. One good example is the officially produced calendar of the Lodz Ghetto which, uniquely, indicated not only Shabbat, Jewish holidays and the Gregorian date, but also the birthday of the infamous authoritarian leader, the ghetto’s Jewish Council (Judenrat) head, Chaim Rumkowski. The calendar of the Lodz Ghetto, the most thorough of all Jewish calendars produced in ghettos and camps, provides us with a glimpse into the sense of common history and identity that the officials of the Lodz Ghetto wished to endow the Jewish population of the most hermetically sealed of Poland’s ghettos.

Another example of the wealth of knowledge that Dr. Rosen extracts from his careful analysis of every calendar is not only what they include, but also what they do not. Both in the Buchenwald calendar—created by Rabbi Yaakov Avigdor—and the compact, typewritten calendar luach katan composted in the ghetto and transit camp Theresienstadt (Terezin), the otherwise meticulous detailing of every Shabbat, parashah and holiday gives way to the omission of summertime fast days, such as the Seventeenth of Tammuz or the Ninth of Av (they are either left blank or missing a “fast day” indication). Dr. Rosen relies on his common sense rather than evidence, when accounting for each omission; in this case, he surmises that the two fast days, commemorating the destruction of Jerusalem and both the First and Second Temple, were omitted not out of neglect, but out of concern that fasting in a concentration camp during the hottest days of the year is dangerous and therefore must be avoided. Drawing this kind of conclusion from the study of Holocaust artifacts, while speculative, helps us grasp the deeper meaning of the calendar as a tool helping to mark (for those in possession of it) the boundaries of Jewish practice in the new, extraordinary circumstances of Nazi persecution.

Of course, not every Jewish inmate of a ghetto or camp needed the omission of a fast day from a Jewish calendar in order to skip it. Equally obvious is the fact that the Nazi definition of Jews was racial and included both traditional and non-traditional Jews. The brunt of tracking Jewish time was not equally borne between both groups. While Dr. Rosen certainly turns his attention to tradition’s followers, perhaps the most compelling conclusion of his work is that Jewish time tracking during the Holocaust and the production of Jewish calendars is something that anyone attempting to better understand Jewish life under Nazi occupation should carefully consider. The book’s reach transcends the confines of Jewish Orthodoxy by introducing us to so many different calendar producers: rabbis, artists, ordinary people—a long list that even includes a Catholic priest. Most importantly, the existence of Jewish calendars teaches us something fundamental about life in the ghetto and concentration camp for the ordinary inmate. It challenges the perception of the typical concentration camp inmate as a muselmann, the dazed, starved and fatigued creature that has already lost touch with human reality, an image that gained currency in popular culture through the works of survivor writers like Primo Levi and others. Dr. Rosen cogently illustrates in the book that while a small segment of the concentration camp population did reach that rock-bottom state of mental death preceding the physical one, most inmates were, in fact, in a position to care about Jewish time tracking. Moreover, Dr. Rosen notes, sometimes the possession of a calendar and the awareness of an imminent holiday provided the inmates with a sense of the future, driving them to look up to a moment and thereby transcend the bleak camp reality. “To plot time’s sacred course gave the Jews a key to freedom, destiny and identity,” he observes.

Like the inclusion of a Jewish date next to the Gregorian one, The Holocaust’s Jewish Calendars brings together both the physical struggle to survive, and the no less important spiritual one. Dr. Rosen’s work is a tour de force that shows us how interconnected these two really are. And how the theme of spiritual resistance can be appreciated in full when its traditional dimension is, at long last, fully explored.

Dr. Shay Pilnik is the director of the Emil A. and Jenny Fish Holocaust and Genocide Studies Center at Yeshiva University.