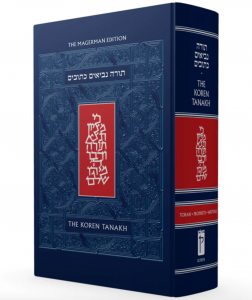 From the Rambam’s commentary on the Mishnah and the Kuzari (both written in Arabic) all the way down to Asterix and Tintin (French), almost every one of us reads translations. Yet very few people actually give much thought to the difficult issues translation involves.

The two goals of all good translations are readability and faithfulness. Accordingly, the biggest question faced by a translator is the relative weight to assign to these two goals when they are at odds. One thing is certain—no matter how good the translation, something always gets lost. And the price of that something goes up in proportion to the importance and complexity of the work. It is no wonder then that the rabbis saw their own translation of the Torah into Greek as nothing short of a tragedy.1

Yet it is equally obvious that most Jews today would have little or no access to the Torah text if it were not available in translation. That makes the attempt to better capture the original for this audience a noble one. And noble would be a good description of the efforts put forth by Koren to write a new translation of the Jewish Bible in The Koren Tanakh Maalot—Magerman Edition.

The main thing readers will want to know is how good the translation is. The answer, however, will depend on who the reader is and what he or she is looking for. To cut to the chase, and so that my criticism below not be misunderstood, my answer is: given the stated goals and the main audience for which it was written, it is an excellent translation.

In evaluating the translation (and actually any literary work), knowing its primary audience is critical. Very soon after I began my review, I realized that I was not part of that audience. Someone who understands the original language of a work will usually not want to read it in translation, all the more so when it is the word of G-d. The publishers, however, understood that there are many Jews and non-Jews who do not understand Hebrew and nevertheless want to experience the Jewish Bible in a traditional way.

Of course, that is an oxymoron. I am reminded of the beautiful metaphor for Hebrew in the classic animated film Lights, in which the Hebrew letters danced, moved and glowed, whereas the Greek letters (it could have just as easily been Latin, meaning English, letters) just sat coldly in their place. But if the experience of Hebrew cannot be fully replicated, it certainly makes sense to use the full power of contemporary English to present the Bible’s core teachings, as they have been understood by Jews throughout the centuries.

It is with this awareness that we should read the anonymous preface: “We have prioritized the experience of the English, with the aim that those holding this volume will . . .  lose themselves in the drama of the narrative, the elegance of the poetry, the holiness of the laws and the relevance of the wisdom” (p. xx). Both in tone and content, these eloquent words serve as a good summary of this work. Though one can question certain phraseology or word choices (for example, maintaining the King James translation of beheimah as “cattle” [Genesis 1:24], when that reflects the word’s usage in Middle English, in which it included all domesticated animals, but not in contemporary English, in which it certainly does not), the writing is superb.

The translation is written with a broad contemporary audience in mind and makes the Torah’s prose sound not too different from a contemporary novel. This reflects a move from reverence to relevance, and from a sense of distance to familiarity. This move is most strongly symbolized by replacing the use of “thee” and “thou” in the old Koren edition to “you” in the new one. Likewise, by the editorial decision to replace the scholarly Hebrew spellings to more colloquial ones, such that Ya’aqov now becomes Yaakov. The introduction tells us that this was done to create intimacy with the text—something which makes a great deal of sense if we want more people to read Tanach with greater frequency. In all of these moves, and in the artistic license sometimes taken with the text, the editors show a keen understanding of the general audience that seeks greater accessibility to the world’s most influential book.

Yet by prioritizing readability, this translation perforce downgrades another important aspect of the Jewish experience of Tanach, one which may take precedence for Jews fully immersed in the Jewish tradition (even those with weak Hebrew or no Hebrew at all). And that is traditional talmud Torah—the practice of looking at every word, sometimes even every letter, of our foundational texts to derive meaning. Granted, this type of study is highly dependent on the Hebrew, but the closer the translation is to the original, the more such study can be simulated—or at least appreciated—in English.

Talmud Torah is predicated on the notion that the original is somewhat indeterminate, meaning that it allows for various possible meanings. The more the ambiguity of the original is carried over into the translation, the more faithful it is to the creative enterprise we know as talmud Torah. Hence—while certainly true—the oft-mentioned assertion at the beginning of the Koren Tanakh that “every translation is an interpretation,” should not be seen as a credo that excuses reducing the richness of Biblical texts to only one possible reading.

Most Jews today would have little or no access to the Torah text if it were not available in translation. That makes the attempt to better capture the original for this audience a noble one.

An example of the price paid for the sake of readability can be found in Hagar’s encounter with an angel or angels when she first runs away from Sarai (Genesis 16:7-12). A famous midrash (Bereishit Rabbah 45:7) takes note of the triple verbatim repetition of, “And an angel of the L-rd said to her” (verses 9, 10 and 11)—after already introducing the angel in verse 7—and concludes that there were actually four angels. Of course, it is not the only way to read this repetition, but it is one that works well with the Hebrew text. Yet because such repetition also reads clumsily, the Koren translation changes the phrasing the second and third time, thereby undermining the midrashic reading. It undermines it further still by using the wording, “the angel . . .  added.”

It is obvious that a translation cannot be expected to retain the Hebrew nuances upon which every midrashic interpretation is based. Nevertheless, given that Rashi adopts this reading and many will study this text with his commentary, the easily avoidable (yet possibly mortal) injury caused to the midrashic reading here is a translation choice with which I cannot agree.

The creative license taken with the original text sometimes goes in the opposite direction as well, trying too hard to follow rabbinic readings—which can paradoxically backfire:

One of the most interesting discussions about the relationship between the Written Torah and its traditional explanation centers upon the phrase, “ayin tachat ayin” (Leviticus 24:20). The simple meaning (peshat) would seem to be that someone who blinds another person should be blinded as well. Yet the rabbis insist that this is not the primary intention of the words here. Rather the Torah is instructing us to give monetary compensation that would reflect the value of the blinded eye.

This dichotomy makes the phrase difficult to translate. Nevertheless, most translations opt to retain what seems to be the literal meaning, “an eye for an eye.” Here, however, it is translated as “the cost of . . .  an eye for an eye.” In this and other cases like it, a footnote appropriately indicates that this is based on the rabbinic understanding of the text, and that “this phrase is not explicit in the Hebrew.” Yet by presenting it as the translation, the editors boldly imply that the rabbinic understanding is the actual meaning of the words.

Although this would seem to show great loyalty to the tradition, I believe it actually works in the opposite direction. For by trying to prove that the intended meaning of ayin tachat ayin is not the literal meaning, the rabbis (Bava Kamma 83b-84a) reveal that they understood that the simple meaning of the phrase is not “the cost of an eye.” That simple meaning is then part of the Written Torah and its sanctity, which must be studied in tandem with the Oral Torah and its interpretive tradition.

Though some may brush off the above as minor points, these types of deviations occur with disturbing frequency. But that is only if one is using the text for talmud Torah. And, as previously mentioned, I do not believe that was the primary goal of the publishers.

Given my critique, it should perhaps be emphasized that the editors’ commitment “to the way that the Tanakh . . .  has been received and understood in the Jewish tradition,” was not taken lightly. Hence traditional readings generally have pride of place. And even when they are displaced, it is done reverently and without injury to core understandings. A good example of the latter is found in Psalms 82:1 where elohim—based on Rashi and Radak, and ultimately on the Talmud (Berachot 6a, et cetera)— is no longer translated as judges, as in the old Koren translation (and as in other traditional translations). Here—more in accordance with academic Biblical scholarship, but significantly also in accordance with Ibn Ezra—elohim is translated as divine beings.

The Koren Tanakh Maalot—Magerman Edition has a place on every Jewish bookshelf. It certainly deserves to be the primary resource for those who simply want to read the Jewish Bible in English. But even for those of us seriously engaged in talmud Torah—the erudition and readability of the new Koren Tanakh may still make it the default translation (though I would strongly recommend using it with discretion and making needed changes when including it on source sheets). This is even without taking note of its beautiful physical presentation and its many helpful charts and maps.

The publication of the new Koren Tanakh translation is good news for many reasons. But precisely because it does the job it sets out to accomplish, it reminds us of the importance of studying Tanach in the original.

Rabbi Francis Nataf is a Jerusalem-based educator, translator and writer. He is associate editor of the Jewish Bible Quarterly, the author of the Redeeming Relevance series on the Torah and translator of many Torah classics for Sefaria.

5 2 votes
Article Rating
This article was featured in the Summer 2022 issue of Jewish Action.