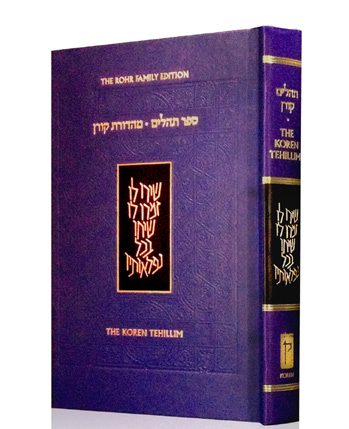 As people of religious spirit, we look to Tehillim to help us overcome the hardships of life as well as the challenges of remaining faithful, of defeating despair, of maintaining courage against all odds and of prevailing over a frightening force of Evil. Tehillim resonates with us; its style is beautiful and direct, cosmic in scale, majestic, poetic and rhythmic. It is full of Divine footsteps and fingerprints.

Psalms read in English can affect one almost as much as when read in Hebrew. Those cultures based on a Biblical outlook, such as American, and English from the Elizabethan Age until World War II, have looked to Psalms in times of great need. It supplied the values and reflected deeply held beliefs. Those of us brought up when the Biblical outlook was the touchstone of American society well remember those episodes in cinema and early TV where the minister preached a sermon that centered around a verse from Psalms and sprinkled his conversation with maxims lifted from King David’s repertoire.

Part of Americana has been the ubiquitous scene at the funeral or the house of worship where the clergyman intones: “The Lord is my shepherd; I shall not want / He makes me lie down in green pastures /. . . You anoint my head with oil, my cup runneth over.” Psalm 23 in English, especially in the King James translation, carries a loftiness and sobriety, a cadence of sacredness. Psalms has served as a common bridge where Jews and Christians have been able to nod in respect to one another. The new Koren Tehillim will, no doubt, serve the spiritual, religious and emotional needs of all those seeking the Almighty.

Admittedly, upon first reviewing the new Koren Tehillim with translation by Rabbi Eli Cashdan, zt”l, of London, and commentary by Rabbi Dr. Tzvi Hersh Weinreb, OU executive vice president, emeritus, a question came to mind: what need is there for another commentary on Tehillim? I soon realized, as will the reader, that this edition provides two vital and beneficial features that, to my knowledge, are not readily offered elsewhere.

First, for every chapter (ke’pittel), Rabbi Weinreb, a qualified psychotherapist, offers a short but profound introduction describing the chapter’s dominant theme. Consequently, the chapter becomes more than a collection of beautiful statements, it becomes a stanza with each idea building upon the previous one, thereby offering a deeper and broader understanding of the particular psalm. After reciting and reflecting on the chapter, one leaves with a heightened sense of relief and comfort, a soul greater nourished and soothed.

When feeling afflicted and in want of Divine friendship, or when seeking a specific answer, where does one go? By identifying the specific theme of each chapter, Rabbi Weinreb provides the supplicant with a destination for his search, a recitation tailor-made for that moment’s quandary. These “introductions” give Tehillim a far greater immediacy and relevance.

Growing up in the ‘50s, I remember the group of European-born men who would gather two hours before Minchah each Shabbat afternoon in shul to recite the entire Tehillim, alternating between reader and responder. No doubt it was a religious undertaking; nonetheless, we characterized those sessions as a “zag up,” a dry experience of merely saying the words. In contrast, the Koren Tehillim makes Tehillim recitation a genuinely transformative experience.

The theme, for example, of Psalm 14, as Rabbi Weinreb describes it, is “standing up to the cynics wishing to bring down religious believers.” This is especially useful to those of us demoralized by the moral relativism sanctified in our times and the frenzied attacks on traditional values. His digest of Psalm 64: “asking God to help against powerful and frightening forces and the wicked councils arrayed against us.” Today’s matzav makes Psalm 64 a “go-to” Psalm. Rabbi Weinreb encapsulates Psalm 121 with the following: “I feel alone. I’m afraid of failing. God, please help me.”

Rabbi Weinreb writes in Psalm 8: “We are told that our relationship with God must be a paradoxical one: we are to love Him, but we are also to stand in awe of Him. We feel love when we look up and see God’s works, yet we stand in awe when we contrast ourselves with Him . . . we feel insignificant. Yet, he has made us a little less than Divine and has given us dominion over all of His creations. But with that power, He challenges us with great responsibility.”

These Psalms appeal to us as individuals, as members of the Jewish people and as creatures longing for answers to universal questions.

Furthermore, by being made aware of the dozens of sentiments and themes expressed by David the Songster, our minds and hearts discover new ideas, exposing us to new waters of refreshment heretofore not experienced or pondered. Horizons and consciousness are broadened, as are our spiritual and emotional worlds. We are given a spiritual flashlight illuminating greater possibilities for the soul
and anima. 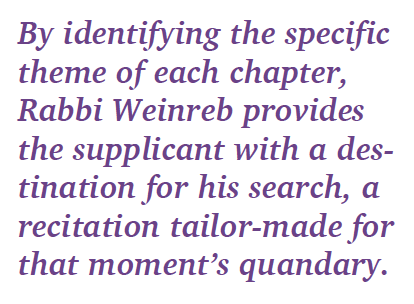 Second, in addition to the insightful introductory statements, Rabbi Weinreb makes another significant contribution in this edition—the commentary itself, the peirush on the individual verses. His commentary makes the Psalmist’s words personal. It is as if David is speaking to me . . . and for me. It is not an arcane or esoteric commentary directed at an academic audience. It is a commentary that promotes Tehillim as prayer, not as study/text. Its aim is the heart and soul.

Rabbi Avraham Yitzchak HaKohen Kook and Rabbi Samson Raphael Hirsch are featured prominently in Rabbi Weinreb’s commentary. He also gleans from the Midrash, Chassidic and Litvishe thinkers, the Talmud and insights he has absorbed in his work as a psychologist. Rabbi Weinreb is keenly aware of the questions and dilemmas facing contemporary man.

This Tehillim does not overdo with regard to commentators—as if the more commentators the merrier. It doesn’t show off. It allows Tehillim to remain a personal companion. Its lessons are down to earth, a kind of low-hanging fruit available for emotional sustenance. The language is accessible, serious and direct. Thankfully, it is neither overflowing with the latest spiritual trendiness nor with the language and motifs of a new-age political correctness.

Physically, this edition is a winner. While not the King James English, the translation is dignified and lofty. The font is attractive, laid out on exquisite, silky paper. The layout is soothing and appealing, as a Tehillim should be. It is rich looking, yet understated and classy. Henceforth, it will be the Tehillim unit by my side.

The Koren Tehillim’s true test will be this: will this be the Tehillim we choose to take with us on a trip, a Shabbat away, when going to the hospital, when alone at night seeking solace after a turbulent day or when the sureties of life are challenged and restless confusion sets in? Will this be the Tehillim we use to pass on to our children and grandchildren the lessons, the remedies, the messages they need? Will this be the Tehillim that will become a family heirloom—the proverbial family Bible? After all, Tehillim is unique among the Biblical books. It is not meant simply for study, it is something to feel. It should console, make us aspire and burst us with joy. It should envelope.

Koren has published a first-class Tehillim.

Rabbi Aryeh Spero has served pulpits in Canton, Ohio, Manhattan and Great Neck, Long Island; has published in the Wall Street Journal, Washington Times, Human Events, Tradition and numerous other publications, and is a frequent guest on FOX News.