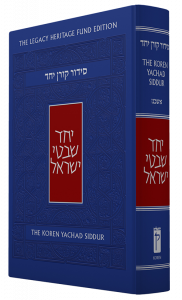 Many years ago, following Friday night Maariv in the Modern Orthodox synagogue I had been attending for a few years, I turned to those around me and, as one is inclined to do, said, “Good Shabbos.” A moment later, an older man, a stalwart of the shul whom I had seen regularly but never spoken to, approached me with a warm smile, introduced himself and said, “Good Shabbos! Welcome to the shul! What’s your name? How long have you been davening here?” I responded, “Good Shabbos, my name is Stephen and I moved in about five years ago.” He said, “Well, nice to meet you, have a great Shabbos!” As he turned away, my curiosity was piqued, and I called back to him, “Sir, thank you so much for introducing yourself, but I have to ask—I’ve been coming here for five years. What made you approach me tonight?” “Well,” he responded, “my brother is visiting us for Shabbos, and he has Down syndrome. You were the only person who wished him a ‘good Shabbos’ after davening.”

Looking back, I do not believe this story would happen in most Modern Orthodox shuls today. Firstly, I think shuls in general have gotten friendlier. More importantly, though, many of today’s “shul stalwarts” did not grow up during the era when families were told to institutionalize their children who were born different, but rather as the generation who spent their summers as counselors in camps for children with specialized needs, attended yeshivah day schools with inclusion programs, spent their high school years attending inclusive Shabbatonim, and worked their way through college by earning extra money as counselors in group homes. This is a generation of individuals who today sit on yeshivah school boards and advocate for accepting students with specialized needs; who coach Little League teams and try to make sure everyone gets a chance to play; who sit on building committees of shuls and ensure that seats for people who use wheelchairs are scattered throughout the sanctuary instead of piled together in one section; or who simply make sure to politely point out to those who are less sensitive that it is offensive to use a derogatory term for specialized needs that means stupid or slow. And, of course, many of this generation are now the parents of children with specialized needs themselves, who, because of the inclusiveness of the community in which they were raised, see themselves in some way as having prepared for this challenge and responsibility their entire lives.

And yet, as with all societal progress, just as what was once unimaginable can become commonplace, so too what was once considered “cutting edge” can become outdated. In the field of specialized needs, sheltered workshops have been replaced by supported employment. Institutions housing thousands were replaced by developmental centers for hundreds, which were then closed in favor of group homes of ten, which are now themselves viewed as “institutional.”

When it comes to the concept of “inclusion,” a similar evolution is in order. Specifically, it is time to move beyond “inclusion” and start engaging in the actual act of “including.” Put another way, we need to stop viewing the inclusion of people with disabilities as an activity (something you do, say, at a Shabbaton or over the summer or for “chesed hours”) and instead view including people with specialized needs as an act of normalization, not something we do for a person because of his disabilities, but rather something we do with a person, regardless of his challenges or differences.

The new Koren Yachad Siddur is a wonderful step in this direction. Masterfully edited by Rabbi Dr. Benjy Leibowitz and Michael Adler and published with the support of the Legacy Heritage Fund, the Koren Yachad Siddur is designed to make communal prayer more accessible to people with intellectual disabilities, through its innovative graphic design, formatting elements, and a “conceptual translation” that aims to explain fundamental concepts. Color-coded text points the reader to explanatory commentary or highlights sections of the prayers that are read aloud, said only on certain days or spoken only by the shaliach tzibbur. Easily understandable icons and instructions identify points in the davening at which one is expected to engage in behaviors such as sitting, standing, bowing, kissing one’s tzitzit or taking three steps backwards and forwards. Headings for certain prayers delineate their overall theme or suggest specific areas of focus while praying. The editors appear to have done their best to address the question, “What can we do to make prayer more accessible?” and have responded with practical innovations.

The “conceptual” translation will certainly help its users more directly grasp and personalize the intended meaning of the words in ways that more traditional siddurim do not. For example, throughout the siddur the words, “Baruch Atah Hashem,” which in the standard Koren Siddur are translated as, “Blessed are You, L-rd,” are simply translated as, “Thank You, Hashem.” Other editorial choices appear aimed to preempt challenges and simplify concepts that in general can be troubling for some people. For example, the relevant Morning Blessings are respectively translated as, “Thank You, Hashem, our G-d, King of the World, Who allows me to do the special mitzvot for men” or “the special mitzvot for women.” Other changes appear to be catering to the more specific sensitivities of the intended audience, such as the Refa’einu blessing in the Amidah, typically translated in the Koren Siddur as, “Heal us L-rd and we shall be healed. Save us and we shall be saved,” but translated here as, “Hashem, if You decide to heal the sick, they will be healed. If You decide to save those in need, they will be saved.” Of course, there will always be someone looking to “out-sensitive” you, and such opportunities might be found. I was personally surprised to see the morning blessing of Zokef Kefufim, normally translated by Koren as, “Blessed are You . . . Who raises those bowed down” (and more literally by ArtScroll as “Who strengthens the bent”) here elucidated to the potentially less sensitive, “Thank you, Hashem . . . Who allows me to sit and stand.” Nevertheless, overall the editors seem to have succeeded in keeping the text person-centered for their intended audience.

As is often the case with modifications that help those with learning and developmental challenges, many of the graphic and design innovations of the Koren Yachad Siddur will also likely be found helpful by individuals of all abilities who may find communal prayer mystifying or otherwise not easily accessible. At the same time, this is not a “beginner’s siddur.” A familiarity with the structure of davening is assumed, and while the conceptual translation may make some abstract ideas more understandable, it remains a “Yeshivish” conceptual translation despite its description by the editors as an “English conceptual translation.” So while “Baruch Atah” may be translated as “Thank You,” “Kaddish Yatom” is translated as “Kaddish Yatom” and “Beit Hamikdash” is translated as “Beit Hamikdash.”

While making prayer more accessible to those who would benefit from this siddur’s use is clearly the driving force behind its publication, there is a secondary benefit to having this siddur in the hands of those praying in our shuls, and even simply having this siddur on the shelves with all of the other various siddurim we use: it conveys the message that people of all abilities are welcome. It shows the community and anyone who enters our houses of worship that just as we welcome those who prefer a linear translation, over a side-by-side translation, or those who require Russian text next to their Hebrew and Aramaic instead of English (or who prefer no translation at all), we also welcome people with intellectual and developmental disabilities. That is why, in addition to highly recommending this siddur to those for whom it was intended, I hope that every congregation purchases a few copies for its shelves and labels the shelf appropriately for all to see. Hopefully, someone will pick it up and find it helpful. But even if nobody does, its presence will serve as a reminder that regardless of how the Creator chose to create us, we all belong.

Thinking back to that Friday night some three decades ago, I don’t recall if I purposely went out of my way to wish that man with Down syndrome a “good Shabbos” because I was a graduate student in developmental psychology working in group homes, or if I said “good Shabbos” simply because the young man happened to be sitting near me. I would like to think it was the latter. And, to be fair, I don’t know if other people did not say “good Shabbos” to him because he had Down syndrome or because it simply wasn’t a particularly friendly shul. Either way, it seems nobody else did, and his brother, who was of that generation who either visited his brother in an institution or perhaps didn’t recognize the heroism of his parents in keeping him out of one, seemed to think it was something unique. But it shouldn’t be, and today it typically isn’t. People with disabilities are more commonly found inside synagogues today. Shul buildings are more inclusive. And now, with the Koren Yachad Siddur, perhaps we can help those with specialized needs in our shuls be even more included in what we are all supposed to be doing once we get there.

Dr. Stephen Glicksman is a developmental psychologist. He is the director of clinical innovation at Makor Care and Support Network and founder of its Makor College Experience Program in partnership with Yeshiva University.

5 2 votes
Article Rating
This article was featured in the Spring 2022 issue of Jewish Action.