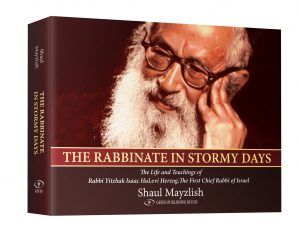 Once in a great while, an exceptional combination of intellect, ability, strength and character converges on one individual at a pivotal moment in history, and a true leader is born. Rabbi Yitzhak Isaac HaLevi Herzog was such a leader. Born in Łomża, Poland, to a rabbinic family, he was raised in England and took his first position as rabbi in Belfast, Ireland, at the age of twenty-eight, eventually becoming chief rabbi of the Free Irish State. After a long and productive career there, Rabbi Herzog became chief rabbi of Mandatory Palestine in 1936, and of the State of Israel in 1948. He held this position until his death in 1959, serving during a period which could arguably be described as the most turbulent, precarious and transformative in modern Jewish history. The Rabbinate in Stormy Days by Shaul Mayzlish is the first English-language biography of this extraordinary personality.

From the moment Rabbi Herzog assumed his role, he became more than a rabbinical guide weighing in on halachic matters and mediating between different religious factions. Because of his wide-ranging expertise and imposing character, he acted as a de facto foreign minister before such a position formally existed. He crisscrossed the globe, from London to New York to Capetown, from Istanbul to Cairo to Mozambique, on behalf of the Jewish people. He spoke with Franklin D. Roosevelt in the White House, brought Harry S. Truman to tears in a private conversation, met with Queen Wilhelmina of the Netherlands and had an audience with Pope Pius XII in the Vatican.

Rabbi Herzog, described by one journalist as no less than a “phenomenon of knowledge,” had a broad range of interests and areas of expertise. He received his early Jewish education primarily from his father, who immediately recognized his son’s outstanding abilities. Already as a young boy he impressed the great Torah scholars of his time with his mastery of the corpus of rabbinical texts and with his innovative insights, sometimes sending his comments on their works to them in anonymous letters. He was also a linguist, who according to some knew as many as twelve languages, and received a master’s in Semitic and classic languages from the University of London. He completed his doctorate on the subject of Hebrew porphyrology (a term he coined to refer to the study of ancient purple dyeing) when he was only twenty-five.

Can one strike a balance between an individual’s right to personal religious freedom and maintaining the Jewish character of the State?

A true polymath, he was equally comfortable discussing Greek metaphysics, Roman legal theory, Arabic poetry, medieval Jewish philosophy, contemporary scientific ideas and current political issues. He moved with ease in both religious and secular circles, and attracted an eclectic group of friends and acquaintances—rabbis and prominent Jewish leaders, as well as Mayor Fiorello La Guardia of New York, the Archbishop of Ireland, and Eamon de Valera, leader of the Irish Revolution.

Scholar, intellectual, ambassador, statesman—Rabbi Herzog was all these, but his unique personality defies simple categorization. He was a man of truth, a charismatic orator who spoke with the authority of a prophet, declaring with utter certainty, for example, that Rommel would never reach Palestine, or that Jerusalem would not fall despite the harrowing Arab siege. He grasped the magnitude of the horrors of the Holocaust before nearly all of his contemporaries, and foresaw the many issues that the establishment of the State of Israel would entail. A man of words and of vision, he was also an ardent man of action. Throughout the war and its aftermath, he worked tirelessly to create awareness of Jewish suffering, using his diplomatic influence and doing everything in his power to save Jewish lives and to help the countless survivors who appealed to him for assistance in finding their families or in immigrating to Israel. Most famously, he organized the rescue of thousands of abandoned Jewish children after the war, insisting on personally accompanying many of them on the train to ensure their safety as they began the journey to Israel. “So great was the scope of his activities,” wrote his son Chaim Herzog, Israel’s sixth president, “that to the outside observer it may seem as though they were accomplished by many different people in different fields, not by one prolific polymath.”

Unfortunately, the English-language reader has had little opportunity to become acquainted with this man of towering character, a Torah scholar and major modern Jewish thinker who not only lived history but helped to shape it. Although he himself published countless articles, as well as a comprehensive work entitled Main Institutions of Jewish Law, comprising two of a planned five volumes on the subject, his contribution to the Jewish nation has been generally overlooked. Now, with the publication of Mayzlish’s book, that deficiency has thankfully been rectified. A translation of the Hebrew biography that was published in 1991, the English version was sponsored by Rabbi Herzog’s grandchildren and includes a foreword by his grandson, former Knesset Member Yitzhak (Isaac) Herzog, as well as an English translation of the original foreword to the Hebrew version by Rabbi Herzog’s son Chaim. The book is an attractive, hardcover, coffee table-sized book, a detailed and well researched account, full of black-and-white photographs and copies of letters, speeches and other texts, allowing the reader to get a sense of the time period, as well as of the vast extent of the rabbi’s influence.

The author includes, for example, numerous letters of support and praise for Rabbi Herzog, written when he first announced that he would run for chief rabbi of Palestine following the death of Rabbi Avraham Yitzchak HaKohen Kook. These letters, by many of the greatest rabbinic figures of the day, came in response to those who were vehemently opposed to his candidacy, declaring, in posters hung on the streets of Jerusalem, that “the holy city will not tolerate a ‘rabbi doctor’ in it.” Also reprinted is the text of the Prayer for the Welfare of the State of Israel, composed by Rabbi Herzog (with the help of S. Y. Agnon and others), which is still recited on Shabbat mornings in synagogues around the world, as well as a kinah (lament), which he penned after witnessing the ruins of the Warsaw Ghetto. There is a photo taken just moments before Rabbi Herzog dramatically tore up the White Paper of the British Mandate in front of the Yeshurun Central Synagogue in Jerusalem in angry protest, an act which his son would later famously mimic on the floor of the UN in response to the proposed resolution equating Zionism with racism.

In the years leading up to the formation of the State, Rabbi Herzog, who believed firmly that Jewish law is eternal and that the values it promotes are the highest example of morality, struggled to harmonize traditional halachic principles with those of a modern democracy. The questions he grappled with are as important today as they were then. What is the relationship between the Jewish State with its laws and the minorities of other religions? Can one strike a balance between an individual’s right to personal religious freedom and maintaining the Jewish character of the State? What role should women play in the army? How will Shabbat be observed in a state that is both democratic and Jewish? In 1947 and early 1948, Rabbi Herzog worked diligently to prepare a comprehensive program for the institution of Jewish law as the civil legal system in Israel, and though the fledgling State did not fully implement his recommendations, his efforts were not without influence. Fundamental issues regarding the character of Israel as a modern democratic religious state continue to be fiercely debated to this day, and Rabbi Herzog’s trailblazing ideas remain extraordinarily relevant.

Scholar, intellectual, ambassador, statesman —Rabbi Herzog was all these, but his unique personality defies simple categorization.

Several pages of the book are devoted to Rabbi Herzog’s doctorate on the subject of techelet, the Biblical blue dye lost to history and only recently rediscovered. The work, a brilliant display of the breadth and diversity of his scholarship, and still considered an important source in the field today, is much more than a comprehensive dissertation on a fascinating topic; it is characteristic of Rabbi Herzog’s holistic perspective in general. Linguistics, marine biology, ancient technology, archaeology, Jewish law, Biblical interpretation and Jewish philosophy are woven together seamlessly. For Rabbi Herzog, there was no intellectual distinction between secular and religious studies, and to read the doctorate is to get a rare glimpse of how to successfully harmonize all branches of knowledge. “The knowledge that the rabbi acquired in the course of his scientific studies only deepened his faith,” writes Mayzlish. “He emphasizes at every opportunity that the general sciences strengthened and reinforced his awe and love of Torah.”

Mayzlish, a veteran journalist, filmmaker and radio personality, has written a beautiful, comprehensive biography, an important reference work full of facts, dates and details, which also manages to convey the author’s deep admiration for his subject. Although the translation is occasionally somewhat stilted, this book is an excellent introduction to the life and times of Rabbi Herzog. The Rabbinate in Stormy Days will be an indispensable resource for all future studies of this unique man who had, to quote his son, “an endless supply of love for the State of Israel, for individuals, and for humanity”; a man of deep piety and broad knowledge, who was solidly rooted in the ancient faith yet fully engaged in the modern world.

Baruch Sterman, PhD, and his wife, Judy, are authors of The Rarest Blue: The Remarkable Story of an Ancient Color Lost to History and Rediscovered (Connecticut, 2012), winner of the Jewish Journal Book Prize.