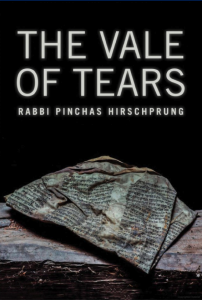 The late Rav Pinchas Hirschprung’s name evokes many important life accomplishments. Leading student of Rav Meir Shapiro, the famous rosh yeshivah who initiated the idea of Daf Yomi. Chief rabbi and builder of Montreal Jewry. Master of all Torah literature, who knew virtually every page of the Talmud by heart.

But I know Rav Hirschprung primarily for the episodes that transpired throughout two years of his illustrious life. (The book covers the period he was in Europe during the war until he escaped to Shanghai.)

In 1939, as the young rabbi of Dukla, a peaceful, mostly Jewish small town in southeastern Poland, Rav Hirschprung quickly found himself in the throes of World War II. His memoir The Vale of Tears begins as a retelling how his family and community experienced the quickly intensifying evil of the Nazis. However, the book soon becomes a story not just of his own relentless quest for survival, but one of deep faith—of the courage and devotion that he lives and spreads while fleeing through ten towns across Eastern Europe, including a stretch of time traveling basically barefoot.

Here he is pushing away a Gestapo officer’s revolver from pointing at a Jewish twelve-year-old boy. There he is persuading a Ukranian peasant wagon driver to consider the final reckoning in Heaven in order to deliver Rav Hirschprung to his destination unharmed. He is caught attempting to cross the Polish-Lithuanian border and miraculously released twice—only to try yet again and succeed.

Along the way, the reader meets many other pure-hearted and pious fellow Jews, such as Dukla’s elderly baker whose messages of religious perseverance stay with Rav Hirschprung throughout his travails, and the sage Rav Chaim Ozer Grodzinski, whom Rav Hirschprung revered and met multiple times seeking guidance.

Interestingly, these recollections were penned just three years after the events described took place, first appearing in 1944 as serialized articles in a Canadian Yiddish newspaper, making this one of the earliest Holocaust memoirs in existence. Through the hard work of the Hirschprung family and the generosity of the Azrieli Foundation, The Vale of Tears was first rendered into English in 2016.

Besides its absolutely riveting and sometimes harrowing accounts, this book moved me for the values that Rav Hirschprung embodied even while literally hovering between life and death: the importance of compassion to others, seeing the gifts of God’s blessings in whatever situation one finds oneself, and the strength an observant Jewish life itself can offer even—nay especially—in trying circumstances.

Indeed, the writing is laden with prose from all kinds of Jewish sources, often employed very cleverly. But as much as Rav Hirschprung’s prodigious mind shines through his chronicles, it is the magnificence of his humanity and heart that make his story one I find so uplifting.